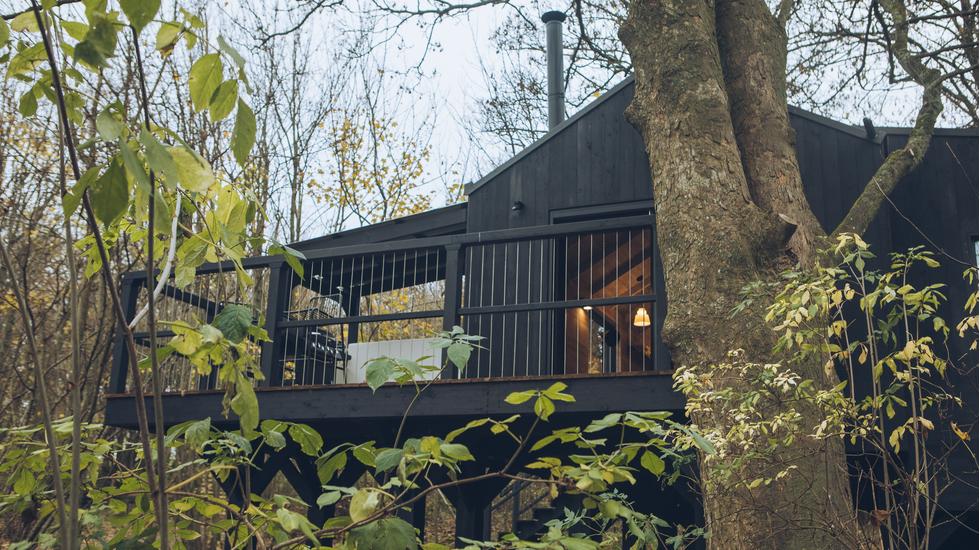 Tree Tree houses are the eco-trend that shows no signs of slowing. Proving that staying sustainably doesn't have to mean compost toilets and trickling showers is Will Hardy, the owner, designer and treehouse mastermind behind Wild Escapes, which brings together four luxury forest dwellings. Glamping? Never heard of her. This puts the style in sustainable staycations.

These are the UK's only tree houses with a vineyard as their surrounds - an award-winning vineyard we might add. Veteran tree-house builder Will Hardy chose the site not just for its outstanding beauty or the booze, but for the chance to transform 1,500 acres of disused farmland into a new, viable venture. Diversifying the farmland gives Will a chance to work with not only the Black Chalk vintner and the farm, but also the wider Fullerton village. Supporting local and eco-friendly? Swoon.

Although this is Will's first boutique venture, we're already huge fans of his meticulous sense of style. There's not a single detail that he hasn't pondered - so much so that a set of salt shakers got sent back for not matching a particular tree house's aesthetic. The result? Each tree house has its own character.

Bring a torch and make sure you're paying attention when approaching the tree houses - teetering on tranquil Hampshire countryside, they're a bit challenging to find. Whizzing down from London as lockdown 2.0 came to an end (for two weeks at least), we overshot the sign and ended up doing an 18-point turn in the neighbouring farm's stables. After waking up the surrounding livestock, we found the Wild Escapes slung our suitcases over our shoulders and trudged to our tree house.

From the moment you shut the car door, you'll feel as if you're leaving your plethora of city stress in the back of the boot. The only sound - except for the mud squelching beneath your boots - is from the odd badger (apparently, like us, they have a penchant for mature grapes).

Psst. Keep an eye out for boathouses cropping up in Norfolk and seaside cottages in Devon.

Individually designed is one of those annoying, industry buzzwords - usually used to describe identikit hotel rooms that have two different types of curtains and the odd scatter cushion. Yet at Wild Escapes every single detail - right down to the choice of toaster and kettle - differs. Even the light switches aren't duplicated. We suggest picking your treehouse based on your personality (or the current palette of your Instagram feed).

First to greet you as you make your way down the path is The Perigord - our abode for the weekend. The charred Siberian larch exterior makes for a striking arrival among the stripped-back trees - we visited in the midst of winter. Inside, bleached woods are offset by a matte-black wood-burning stove, a sinkable royal-blue sofa and huge windows (handmade in the Lake District) overlooking the forest. There are two bedrooms: one that opens up to floor-to-ceiling views of the winery and one with bunk beds. We were pretty smitten with the morning vistas, especially since the mirror hidden behind the sliding door that separates the open-living space from the bedrooms reflects all the surrounding woodland. We counted four squirrels frolicking in the trees while sipping our morning brew.

Up next it's The Fallow. This one gave us a mixture between Cotswold second-home country house vibes and Provencal pied-à-terre vibes. Bathrooms are decorated in a Marie Antoinette duck-egg blue, the rustic kitchen is a burnt-terracotta colour, the flooring is a parquet we're sure we've seen in Hatfield House, from Netflix's hit film Rebecca. This one also has its own private pooch parlour and the tree outside has a nook in which to rest your champagne flute. Best suited for dog owners that can't bear to leave their furry friends at home.

Around the corner, you'll find The Poppy. This is a more traditional take on the tree house; the cladding has been recycled from an old barn and the handrail from a manor house. There's a chicken-wire fence on the balcony and a bench that's been hacked from a fallen tree. Inside you'll find a Victorian-inspired bathroom - complete with an apothecary cabinet and brassy fixtures - Farrow & Ball forest-green paint and copper sinks that evoke Highland cabin vibes. The views aren't as arresting from the terraces, so Will has cleared a patch next to the treehouse that'll house a firepit. We told you, he's thought of everything.

At the back of the pack and raised the highest off the ground is The Damselfly. There's not a drop of concrete in the ground to get its elevation - Will used a screw method that means no tree was harmed in the making. In fact, this tree house can simply be lifted off with no long-lasting damage on the roots. The Damselfly mixes modern materials such as polished-concrete work surfaces with bohemian detailing - think olive-green rattan, rotary dials and a mid-century marble console table that, had I had room in the boot, I would have tried to carry home. Very Mad Men vibes.

If we were forced to pick a favourite, we'd probably have to say The Perigord. We're still obsessed with all things Scandi, and the minimalist vibes remind us of our favourite Copenhagen crash pad.

The al fresco William Holland bathtubs found on each of the four tree houses' terraces are the best in the country. Of course, each one is different in size, shape and colour. Every detail has been meticulously thought out, from the shelf that sits across the bathtub - Will had the carpenters knock up one with a groove to hold champagne flutes - to the curtains that give you some privacy while bathing (read: swimming - these tubs are big). All have outdoor showers, some hewn from old copper pipes, others in on-trend brassy golds, as well as wood-burning stoves and barbecues on the terraces.

Where should we go for a food shop?

Breakfast is taken care of. A hamper brimming with Colombian coffee for the cafetière, tutti-frutti jam, Fluffetts Farm eggs, milk - you can see the cows milling around from the tree house balcony - crisps and sourdough will greet you on entry. We nipped to the village shop for essential supplies and into Stockbridge for more sustainable options.

Here you'll find the much-loved Thyme and Tides deli which serves the village with everything from handmade chilli jam, truffle oil hunted round the corner in Hampshire and slabs of rocky road. We wouldn't suggest doing a full-blown shop here (it's pricey) but popping in for coffee and cake is advised. Stock up on veg at Becky's greengrocers. For meat, John Robinson Butchers - we recommend the British pork, apple and onion sausages that we stuck on the barbecue for breakfast.

What about if we want to eat out?

The Mayfly pub has the funkiest beer garden we've ever seen. In the summer months, pull up a pew outside and watch the trout leaping from the River Test while you tuck into gastro grub classics.

Who should we bring?

Your other half… or someone that has seen you naked at least three times. The plunge-pool-sized bathtub is big enough for two. Waking up to misty morning views over the vines is way more romantic (in our opinion) than any number of beds strewn with cringy (sorry ex-flames) rose petals.

Furry friends are also treated like the kings and queens here. Some tree houses have their own private doggie parlours equipped with beds and bowls so you needn't worry about doggy daycare.

Any essentials we need to pack?

The kitchen is pretty well stocked with pots, pans, salt, pepper and a mini-oven, should you need it. We opted for a winter barbecue out on the terrace (skewers are provided) and roasted s'mores to munch in front of the fire. We're glad we brought oil, foil and a few other bits and bobs to tide us over for the weekend, but anything you forget can be purchased from the village shop - the same lady puts together the breakfast hampers for guests.

In the bathrooms, you'll find a handmade patchouli-and-goat-milk soap wrapped in a resin pouch and, yes, you can take it home. Plus, there's a bottle of bubble bath to make use of in the tub. Wisely, they haven't tried to cater shampoo and conditioner to each and every guest's hair whim so do bring your own.

There's a bottle of chilled Chalk Farm bubbles in the fridge and two extra bottles on the wine rack - those you'll have to pay for but, after sinking the first in the bathtub, you'll want to enjoy the second watching the sunset beneath the vines from the terrace and the third cosied up by the fire.

If you need something to shake off the bubbles from the night before, ask Will to arrange a truffle-hunting tour. It leaves from the farm at the end of the road and anything you find, you can purchase to take back home.

Within a short walk, you can find…

Right in front of you are the vineyards that make up Black Chalk wines. All the bedrooms, baths and barbecue terraces look over the landscape. Whether you're visiting in summer, spring, winter or autumn, the sights are pretty serene to wake up to. Plus, there's a walking trail that starts right outside The Damselfly - it goes around the back of the vineyard and past Waitrose's dairy farm. The area's also known for its calf-burning cycling routes. Will's hoping to have some e-bikes available to rent by summer 2021.