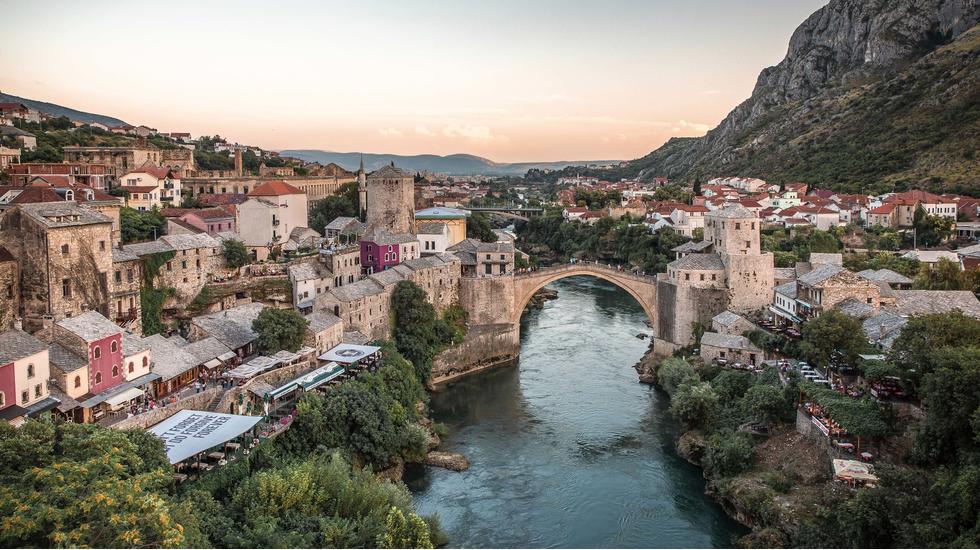 As As you meander through the Bosnian countryside along the winding road to Mostar, it's hard to believe that just over 20 years ago this unassumingly beautiful place was the scene of one of the most vicious, embittered civil wars in history. On approach to the ancient metropolis, wizened trees, half-built houses and buildings ravaged by the scars of war flank the thoroughfare, silent witnesses to the destruction wrought during the siege of 1993.

Rounding the bend towards the old town centre I caught my first glimpse of the Neretva, the jade green river which splits Mostar into east and west and divided Bosniak from Croat in the darkest days of the city's history. Edging our Ford Fiesta cautiously around the narrow streets, young men in high-vis jackets gesticulated widely on every corner, vying for our custom by signalling towards the bright red "P" stuck to their front. Parking is big business in Mostar.

Haggard, weather-beaten old women dotted the side of the pavements, perching precariously on wooden stools and smoking like chimneys. With thanks to our GPS, we arrived at our hotel at the end of the Old Bazaar in the heart of historic Mostar early on a Friday afternoon with the heat of the late August sun still heavy in the air.

Ambling down the treacherously uneven cobbled streets of the Bazaar, enchanting, nasal music emanates from one shop door to the next, blending together to create a syncopated cacophony of mystic eastern sound. Underfoot, the cobblestones are curiously slippery, akin to walking on a bed of writhing eels, throwing balance into disarray. With shop vendors energetically touting vibrant fuchsia and rich, royal blue fabrics on either side of us, each promising a better price than the ones before, we wound our way towards the pièce de résistance - Stari Most.

When the bridge was commissioned in 1567, the architect was charged under pain of death to make it the widest man made arch on earth. Legend has it that the construction was held together with egg protein and metal pins, and as the scaffolding was removed, the engineer was preparing for his own funeral. But against all odds, the bridge held and remained intact until it was blown up in 1993.

The worst atrocities of the Bosnian war took place that same year, the year I was born. From the very first time I read about the Bosnian conflict as a young girl, I carried with me the dream that one day I would visit this place, steeped in chequered history, where the residents are committed to ensuring that this inhumanity never happens again. Crossing Stari Most for the first time, I was arrested by the palpable tranquillity hanging in the air, the diverse multiculturalism of the tourists and, most of all, by the words etched into a corner stone on the bridge's eastern side: Don't Forget 1993.

We ducked out of the sweltering sun into War Photo Limited, a photography installation beside Stari Most exhibiting the work of New Zealand photojournalist Wade Goddard who documented the bloody conflict from its inception to cessation in 1995. With the profound sense of being in a place where humanity has temporarily failed, we journeyed up the bumpy streets to the Koski Mehmed Mosque whose spindle-like minaret offers a postcard perspective of Stari Most and the old town.

Later that night, after a traditional feast of Bosnian cookies and braised meat, we happened upon a throng of revellers outside a pub beside our hotel. As the majority of visitors to Mostar are day-trippers taking advantage of excursions from neighbouring coastal Croatia, we found ourselves English-speaking outsiders in a melee of jolly locals, enjoying provincial Bosnian beer and singing with gusto to the bizarre, atonal melodies played on a loop by the five-piece brass and percussion ensemble. The atmosphere was almost indescribable, laughter and merriment electrifying the night, the musicians building speed, faster and faster, until the crowd were spinning in a widening circle like Alice in Wonderland at the Caucus Race. We clapped and danced with the Bosnians until our feet and voices grew sore, and collapsed onto the patchwork cushions strewn around the bar's front door.

The next morning, we breakfasted on pancakes, sinfully salty Bosnian bread and eggs. We watched the local divers throw themselves from Stari Most with the poise and grace of Bolshoi ballerinas, and tinkered with the tea sets studded with pearls and jewels on sale in the Bazaar. The day was not so oppressively warm, and we took advantage of the cooler conditions to drive almost two hours to the Kravice waterfalls near the holy site of Medjugorge. Quite firmly off the beaten tourist track, Kravice is a favourite haunt of Bosnians who like to bring soap and wash themselves in the murky water while their children frolic and splash in the small but picturesque falls.

On our drive back, we passed Mostar's international school, a sure sign that peace reigns supreme and that a semblance of normality has returned to this colourful outpost. We passed along a street laced with affluence, ivory marble pillars guarding gated stately homes and a walled compound with the flag of the European Union flying at full mast. Juxtaposed against these grand developments were the half-shelled buildings still lying in ruins, products, we overheard one tour guide explain, of a corrupt administration who siphoned restoration funds into the coiffeurs of their own departments.

After driving through the "new" Mostar en route to Kravice, we chose to walk the half hour trip back to the Old Town, taking the circuitous route by what was once the Mostar Sniper Tower. It was a deeply humbling and emotional experience to stand in the shadow of a building that had so recently served as a platform for racial hatred.

Ambling back to our hotel, we went to take one last look at the beloved Stari Most of my dreams. Illuminated by yellow light, with the Koski Mehmed Mosque keeping watchful eye, bathed in its own amber glow, I was struck by how far this bridge, this city and its people have come in just over two decades.