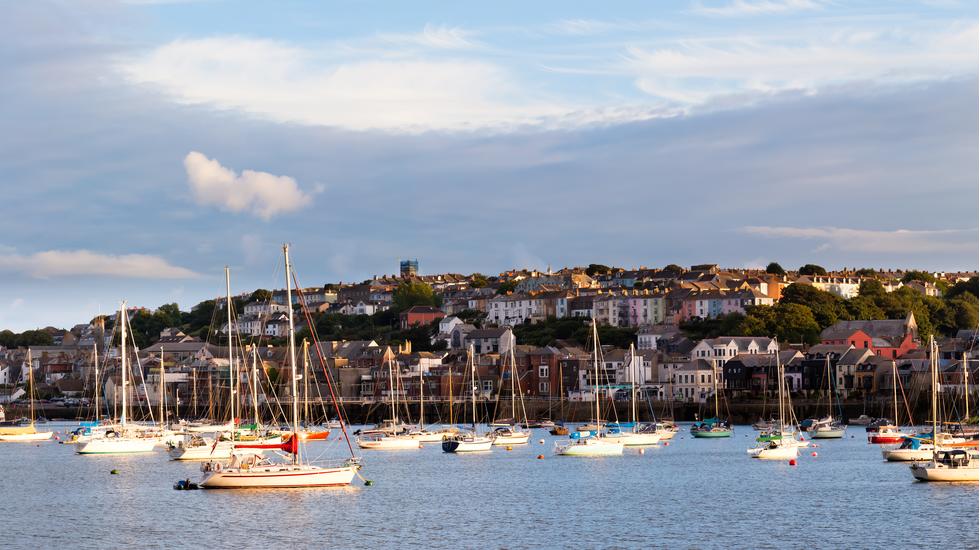 Down Down a concealed slipway off Falmouth's meandering high street sits the formidable figure of Ami, a ship's figurehead standing some six feet tall, poised to meet anyone ambling down the alley towards the sea. Ami is somehow representative of this Cornish town: unexpected, quirky, challenging and steeped in tradition, yet continually reinventing herself with colourful makeovers.

Falmouth is synonymous with maritime history. For more than 150 years, Falmouth's Packet ships filled the harbour, making the town the information hub of the British Empire. It was the point of departure and return for both Sir Robin Knox-Johnston, who in 1969 became the first man to sail solo and non-stop around the world, and Dame Ellen MacArthur, who completed the fastest solo circumnavigation of the globe in 2007. Today, Falmouth's status as the world's third-largest natural harbour means it attracts nearly 40 cruise ships a year.

Yet, the town also has a rich artistic heritage which continues to flourish. It is home to the burgeoning Falmouth University (which began life as the Falmouth School of Art in 1902) and specialises in the creative industries. Its students now number over 6,000, lending an energetic year-round vibe to the town, and a fresh injection of imagination boot.

In the past, Falmouth has attracted luminaries including J. M. W. Turner in 1811, John Singer Sargent in 1905 and, in the summer of 1937, a posse of surrealists, among them Roland Penrose - widely credited with bringing surrealism to Britain - Man Ray, Max Ernst and Henry Moore. The debaucherous group holed up in a manor house on the banks of the River Fal, a sojourn which spawned a burst of creativity.

Falmouth's briny sea air is thick with possibility. Wander down its sloping Old High Street, past windows piled high with second-hand books and an array of antique oddities, and you will pass the distinctive arched windows of the early-18th-century Old Town Hall, now selling an array of contemporary art, while further down the hill is Inspire Makers, from where more than 30 local artists and makers sell their handcrafted products and run workshops showcasing their skills. In July, one of the makers on show was ceramicist, Amy Cooper, who crafts porcelain lighting inspired by the underwater world, drawing inspiration from her riverside home.

The town is a happy fusion of past, present and emerging talent. Arguably Falmouth's most well-known artist is impressionist Henry Scott Tuke, who lived in a cottage and studio overlooking Swanpool Beach, one of Falmouth's four main beaches, in the late 1800s and early 1900s, as well as working from an old French brigantine, which served as a floating studio. His work is celebrated at Falmouth Art Gallery, just off The Moor.

Fittingly, Tuke grew up in a house just off leafy Woodlane, near the town's centre, which now houses Falmouth University. The establishment has bagged numerous accolades in the past year alone, including a BAFTA for the debut film, Bait, written and directed by one of its lecturers, Mark Jenkin, and shot on a vintage wind-up camera. Falmouth University's Games Academy has also been named one of the top 50 games schools in the world.

Staying off the radar of most visitors, the Old High Street's Old Brewery Yard is a charming cobbled courtyard lined by boutique shops peddling clothes, blankets and cushions as well as a studio space frequented by designers, illustrators and makers. Better yet, this is the spot to tuck into local produce such as crab fritters or glazed ox tongue at new-kid-on-the-block MINE, which sustains an ever-changing menu of three starters, three mains and three desserts. Just remember to leave room for takeaway pastries from Stones Bakery on your way down the hill, and perhaps a coffee from the Scandi-cool Beacon Coffee.

Should you succumb to the smell of hot pasties drifting through the streets, call on Proper Pasties in Upton Slip - think of it as a pasty speakeasy. Customers call ahead and place their orders before knocking on the unremarkable wooden door to collect their booty, no questions asked…

One of the town's key point of interest is The Poly, a live-arts venue, cinema, gallery and community pottery that resides proudly in a listed building in Church Street, wearing its nigh-on 190-year history well. These are precarious times, not least for a charity organisation in the arts industry, meaning the theatre won't reopen until early 2021, but its Spring Gallery and shop hopes to throw open its doors with gusto in August 2020.

While the main street has a wealth of contemporary art galleries (don't miss Beside the Wave), there is plenty for those interested in more offbeat creations. Arwenack Street's Botanical Atelier is one such purveyor. Brainchild of Sarah Jane Humphrey, who specialises in illustrating plants, this waterside boutique sells botanical prints, books and even pyjamas, while visitors can also hone their fine-drawing skills in botanical illustration workshops.

Sustenance can be found at the excellent Harbour View café, but we recommend taking the small turning off Market Street towards Fish Strand Quay to sample the delights of IndiDog for breakfast (Drambuie porridge, anyone?), brunch or cocktails by the water.

A few doors down is Real Speed, where artist, Fiona Speed, beavers away in her studio-cum-shop (a former much-loved nightclub), painting and creating everything from cushions and cards to t-shirts and bags. This place is also called home by the alarmingly large Dubby the tortoise, complete with a Kernow-flag shell and crown, naturally…

Falmouth's artistic delights have spilled over into the neighbouring town of Penryn, where you can visit community art space Fish Factory, founded by local artist Rose in 2011. This former sail loft has been reborn as a project space used by 15 eclectic artists (there's a lengthy waiting list) including printers, potters, writers and musicians, as well as a vegan café. Pop in to see exhibitions, events and workshops or just drop by for coffee, cake and a large dose of inspiration.

Falmouth has many faces, with its maritime history, working docks, tourism industry and growing university, but its eclectic arts scene reflects its complex and intensely hued character, and promises to continue to be a hugely important part of its personality.