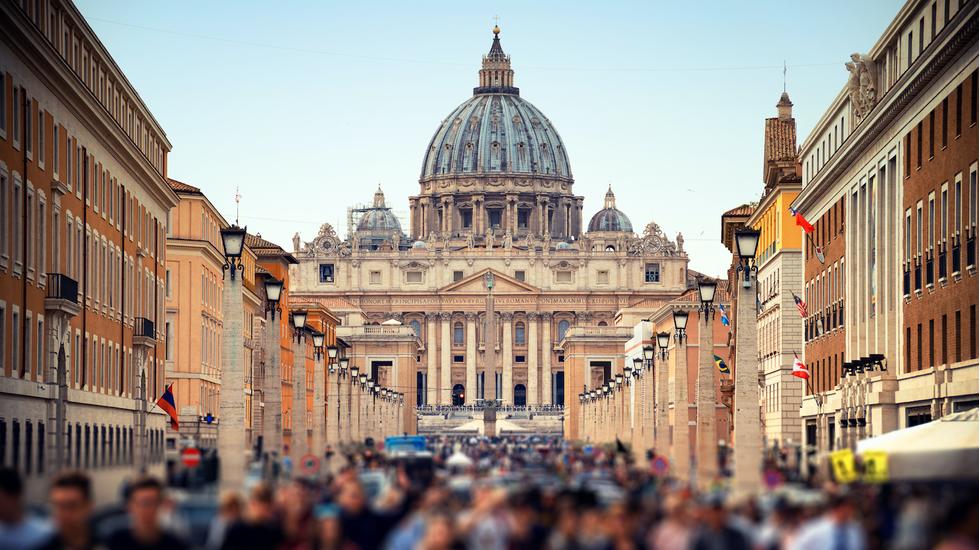 You You don't have to be religious to find churches impressive. For me, it starts with that first whiff of liturgical incense, like a pungent whisper of humanity's past, present and future. In that moment, it's easy to leave your personal hang-ups at the door, to lose yourself among the gold-flecked domes, like heavenly reservoirs on Earth; to empathise with stained-glass depictions of human endeavour - pain, suffering and joy, emblazoned by sunlight - and to marvel at the sheer magnificence that can be produced by the harmonious efforts of humankind.

As a gay man, I guess you might say I'm preternaturally disposed to religion's campy drama, but given many sects' stance on LGBTQ+ civil rights, should we, gays and our straight allies, give our oppressors the green light by bolstering their monuments with our pink money? Is it moral to boycott sites of religious interest, or do we risk broadening the ideological gulf between LGBTQ+ people and our adversaries. Is it a little bit, well, extremist? These are all questions that I've swilled in my mind during this exceptionally long period of travel abstinence.

Beautiful though churches often are, I've always found their prettiness disarming. Case in point: St Peter's Basilica in Vatican City. The stand-out memory from my first and only trip to the epicentre of Catholicism isn't Michelangelo's iconic Pieta statue, Bernini's swirling Baldacchino or St Peter's tomb, but the poverty-stricken beggars, who clung like barnacles to the city-state's towering walls, arms outstretched.

In my experience, some of the world's most zhuzhed up religious monuments - La Sagrada Família, the Hagia Sophia and the Duomo de Milano, to name three - are oases of wealth surrounded by poverty, yet demand a fee (sorry, a charitable donation) to enter.

Like most Zoomers, I'd consider myself a savvy consumer, as likely to investigate the ingredients on a packet of Wotsits as I am the corporate overlords who govern the high street, and that I'm sensitive to the political implications of how and where I spend my time and custom. Stop me if I'm wrong, but I bet you've never questioned where that "compulsory donation" is going, or what the impact might be on people further down the line.

So, where exactly is the money going?

Well, in the case of the Holy See, the central governing body of the Roman Catholic Church, income from tourism and donations is invested in stocks, bonds and real estate, the profits from which are ultimately reinvested in the church. But all is not as innocent as it seems. By funnelling funds through international tax havens - and cutting a few unsavoury deals along the way - The Vatican has built a property portfolio worth £500m. Last year, as little as 10 per cent of the donations given to The Vatican City actually went directly towards charitable work, according to a report published by the Wall Street Journal.

Who knows how much money might have slipped through the cracks along the way?

Thanks to a complex web of offshore accounts and under-the-radar investment funds, scandals besiege The Vatican. My personal favourite has to be the time it was disclosed that millions of euros in donations had been diverted into a "global fund" used to finance Hollywood films, including Men in Black: International and Rocketman, the god-forsakenly steamy Elton John biopic. Not to be crass, but lol.

Who knows how many millions might have slipped through the cracks along the way? I'm oversimplifying, but the life cycle of your €20 entry fee - into an offshore account, before sidling into an investment fund, slinging its way back to The Vatican and, finally, to you in the form of homphobic headlines - might not be all that holy.

It's worth doing some research before tapping to pay. As the Hagia Sophia slowly transitions into a mosque at the behest of an increasingly theocratic government, pause to think what your pocket money might be financing. Even in the UK, until recently the entry fee to York Minster was lining the pockets of Archbishop John Sentamu - a long-time opponent of marriage equality.

The Hagia Sophia in Istanbul, Turkey

These marvellous old buildings aren't just popular because they're pretty. Often, they are religious linchpins and what's proclaimed from the pews, outside of tourist visiting hours, sticks.

A decade might have passed, but I still remember taking an ideological battering from an exceptionally mouthy teacher at school. Religious education was his Thing, though he dabbled in biology (name a more toxic duo, I'll wait) and he was clearly as confused by same-sex relationships as the gormless adolescent boys to whom he was preaching.

"God made us to do [sic] this," he garbled, using his thumb and index finger to create a hole in one hand, while penetrating it with a finger on his other. "Not this," he continued, prodding his swollen digits together in a pantomime of male same-sex intercourse. For context, this was an all-boys grammar school. Somehow I passed biology with top marks, but a decade later the weight of me and my classmates' silent complicity still hangs heavy.

It stands to reason that beautiful monuments might not be as virtuous as they seem. From a young age we're taught not to judge a book by its cover. It's fared me well in London's gay community, where billboard-ready veneers usually disguise deep-seated sadness. The numbers speak for themselves. Over half of LGBTQ+ people in the UK suffered from depression last year (double the national average), while one in eight attempted suicide. Though the tentacles of shame are manifold, religion's stranglehold is exceptionally tight.

In the Chechen Republic, gay shame is so pervasive that families are being urged to kill their children - often after long periods of torture in government prisons. Consider Brexit a mess? Be thankful we don't have a "Kill The Gays" bill, as is the case in sunny Uganda. Across the world, pseudo-psychiatrists are assuaging the disgust of disappointed parents and defying genetic research by whisking children away to gay conversion camps. The common thread? An unwavering, tunnel-visioned faith in religion.

A Catholic Church in Kampala, Uganda

Call me a snowflake, but as I've grown up and found my own path in life, previously gleaming churches have become tarnished.

Part of the charm of travelling is being an outsider; uprooting yourself from the fabric of your homeland and floating through a land of unfamiliar ways and customs. Part of your strength as a traveller is your purchasing power. Don't get me wrong. Few things inspire awe like a crumbly, millenia-old edifice and, if I pass a particularly delectable church on my upcoming trip to Provence, I might just pop in and catch a sniff of that heavenly Frankincense, but to separate religion from commerce is naive.

Nobody would like to think of themselves as a thoughtless traveller, but now, in a post-lockdown world where grab-and-go weekends are becoming replaced by more meaningful trips, is there a case to be made against religious tourism? Perhaps it's time those of us used to tiptoeing around these hallowed halls, gay and straight alike, take a stand.

Discover More
Beyond Belief: The Rise of the Radical 21st-Century Pilgrimage
Read now