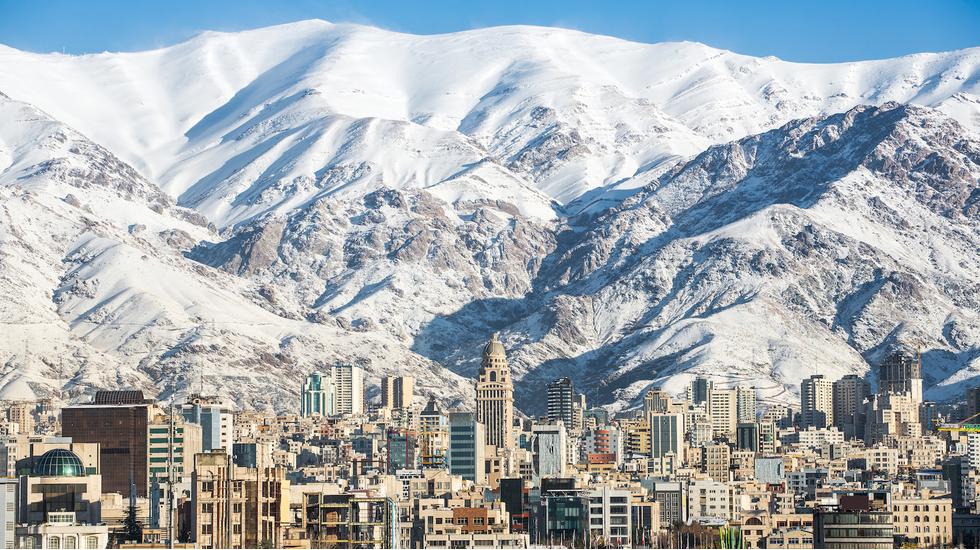 The The Alborz mountains loom large over northern Tehran. Those peaks are the perfect antidote to the sweat, smog and chaos of a traffic jam on a five-lane highway in Tehran. The ski resorts, Shemshak and Dizin, lie about an hour and a half from the city by car. Our driver insists on taking the steeper, more direct route which suffers from the 'occasional landslide' - the 'safer' option via Chalus can add another three hours travel time. We bite the bullet.

The high altitude - both resorts are over 3,000 metres - and predominantly north-facing slopes make this a hotspot for powder junkies who can enjoy a season which stretches from November to May. While in Shemshak the ski area is not extensive, slopes are steep and more suitable for experts with a taste for off-piste with plenty of local guides to show you the way. 10 miles further up lies Dizin, offering a larger and more developed infrastructure, and terrain for skiers and snowboarders of all levels.

Over and above skiing, however, the Alborz resorts offer a glimpse of people navigating the paradoxes of a restricted society. While the muezzin calls people to prayer at the foot of the hill, house music blares from slope-side shacks. Girls remove their veils to enjoy the sunshine despite lifts officially being segregated. As hotel lobbies become deserted at night, locals with whom you've squeezed into a tiny 70s-era gondola will invite you over for some home-brew and a BBQ. Ski gear and passes will set you back no more than $40 per day, but expect super-retro offerings.

Wake early in Tehran to avoid the traffic and hop in a taxi to Shemshak - the going rate is about $40 one way. As you snake your way up and the majestic Mount Damavand creeps into view, make a pitstop at a roadside restaurant to devour some fresh flatbread and barley soup. Notice the contrast between a brand new Mercedes parked outside a luxurious mountain villa, while just across the road an Afghan shepherd, recognisable by the traditional pakol hat, saddles a donkey. Then on to Dizin, just up the road, with its more expansive ski area. Stop at Chalet by the famous purple gondola for some local tea and a thick Iranian soup, Ash-e-reshteh, made from lentils, beans, parsley and a lot of butter - the perfect fodder for an action-packed day.

At each lift, staff will insist you stop and share a cup of tea with them. Don't decline! They'll advise - and for a small fee guide - you on the less travelled but more beautiful and challenging routes. At closing time listen out for the cafés playing music. Drinking is prohibited but a friendly foreign face and attitude will lead the intrepid into enjoying some high-elevation escapism, Iranian style. Stumble back to your hotel at night and keep the balcony window ajar to let the frosty air and the howling wolves lull you to sleep.

A stone's throw from the lift in Dizin are the two hotels, conveniently named Hotel 1 and 2. All rooms offer balconies and cost $20-40. Staff greet you with bright smiles and enthusiastically nod their heads in agreement with everything you say but rarely understand what you're after - it's all part of the charm, just keep your fingers crossed that an Iranian expat steps in as an intermediary. Bigger groups can rent cabins which are only five minutes by shuttle bus from the slopes of Dizin.

If you don't get your fix at Chalet, stop at Chaman restaurant which you'll spot hen taking the distinctive purple gondola from the middle station. Snowboards pitched like a barricade (skiers beware!) dominate the perimeter, while music blasts from speakers and people sunbathe on the roof. Fast-food joints and pizza stands populate downtown, and here you'll even find schnitzel. These cosy shacks are the place to get to know locals. Play darts and pool in smoke-filled basements and experience a different side to the mountains.

For those with an appetite for adventure, take a local guide and head off-piste. The high altitude and regular dumps of snow make even the more-travelled routes seem untouched most days. The descent from Dizin to the neighbouring village of Darbandsar, where you need to have a car waiting to return you to the top, is unbeatable.