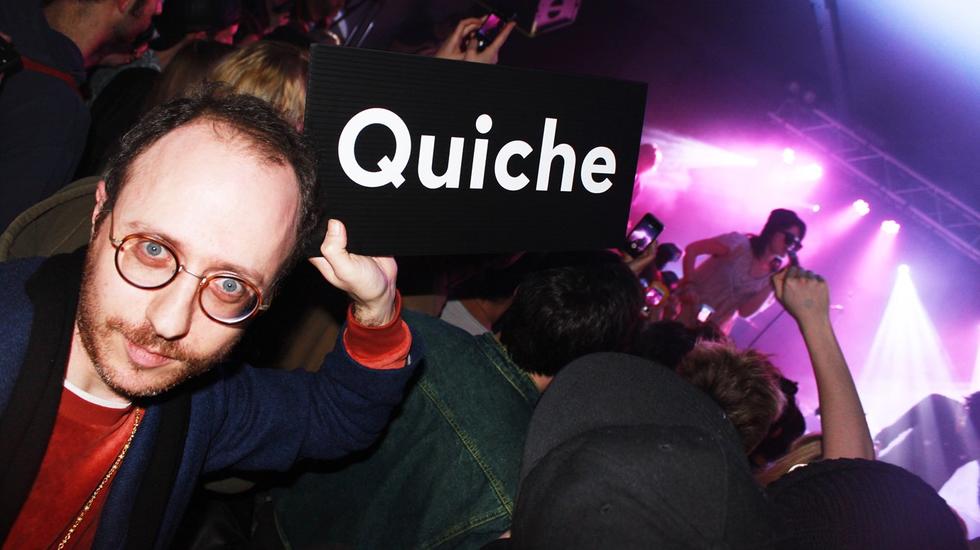 The The world is made up of poets and douchebags. In East London, everyone's a poet, and everyone's a douchebag. Here the trick is to be unimpressed by everything and anything you come across; breweries, espresso bars, graphic designs, Kingsland Road, VICE Magazine, London Fields, Dalston Junction, rooftop jacuzzi cinemas, pop ups and pop downs. You must pretend it's all been done before, no matter how original it may be.

To be honest, pretending to love the East End is the new pretending to love One Direction. People think this area is all about being a hipster, but no more. Now its much more specified, its about Mipsterz (Muslim hipsters), Jewpsters (Jewish hipsters), Ripsters (hipsters who rip you off ) and UKIPsters (UKIP hipsters who want to leave the EU merely as a fashion statement).

This applies to Hackney and the areas surrounding it, but many areas technically in East London still aren't even aware that they're a part of this. Places like Whitechapel, Stratford, Upminster and even Mile End has got nothing to do with sarcasm. People there aren't even facetious and don't use penny farthing bicycles that often. They got caught in an evolving gleeful-depressing hip scene while just trying to sell fake sim cards.

GET IN The closest airport to East London is London City Airport, E16, but it is pretty much shriek (the opposite of chic - @isitchicor- shriek). Only businessmen fly from there and use the DLR, the most awkish-awkward train in running in this postcode. Stansted Airport is more chic: it's the people's airport. Ryanair, Wizz Air, Monarch airlines. One problem is getting there, a one-way train ticket to and from Liverpool Street costs almost £30 (more than an EasyJet flight often). Also Liverpool Street station isn't considered East London since it's managed by the Lord Mayor, not the Hackney Mayor. The solution to get straight from Stansted to Hackney Central is to buy a cheap ticket to Bishop's Stortford (the closest station to the airport), then stay on the train and get off at Tottenham Hale station, stay on the platform and switch to next train that goes through Hackney Downs station, the most rotten and epic station in the borough.

GET AROUND Line 38 bus is the most iconic bus that goes to Hackney, especially if you're stuck in Central London at 3am and need to get to Dalston quick for Alibi (a basement on Kingsland Road). The 38 is a new 'Borisbus' or 'Borismaster' (a portmanteau on the Mayor of London's name and the word Routemaster). It has two staircases and three doors, plus an attendant standing at the back to make sure people don't hop on it without paying. Cash is no longer allowed anyway in London busses, so no one cares anyway, but still it's an extra job for a person at these bleak times of youth unemployment and adult pre-employment.

PHONE Blackberry only. All the kids in Hackney use Blackberry, full stop. In the 2011 London Riots this device was a big hit, as none of the Police could not understand the hundreds of encrypted BBM messages, organising the crowd and telling them where and when to loot Direct Sports for trainers and caps. Blackberry is a cheap handset, if not the cheapest, plus no one else uses it outside this area so the network is pretty fast. Vodafone or O2 don't own a lot of stores in the area of Bethnal Green and Hackney Road, as many residents spend their days in Whitechapel Market (E1) buying and selling old Nokia mobiles and cutting sim cards from a micro sim to big sim sim, with a special stapler.

Sleeping fast is a new concept, otherwise how would you justify 'express' hotels

SLEEP Airbnb flats on Broadway Market are really passé, as the new thing in the east is to stay for a week at the Premier Inn hotel that just got opened off Dalston Junction, ironically, as awful express hotels are the considered the new boutique hotels. Sleeping fast is a new concept, otherwise how would you justify 'express' hotels. The craziest thing to do is to read the Dalstonist (local paper) in the Premier Inn lobby while listening to classy song called King City by Birmingham indie band Swim Deep. Also don't forget to have the allure of being interested in Politics at lunchtime, as fake VICE account @VICE_IS_HIP tweeted: 'We snorted coke off a refugee's back and sent the selfie to Mugabe. Politics.'

PROCRASTURBATE There are many ways to achieve satisfaction whilst doing nothing with your life. Alexa Chung pre-coined it once as 'Procrastin-hate'. The key is to walk up the street to the wouldbe yuppie area of Stoke Newington, all the way to the small Whole Foods branch on Church Street. Whilst there you need to fill up a cart with soya and avocado hummus, then leave it there and walk out empty handed, all the way back to the Haggerston Pub, while stopping for a diet coke outside a Mosque, for lolz. White gay people stealing black subculture is the new everyone else stealing black subculture. Try to figure it out. The key is to convince yourself you have absolutely no idea who Ed Sheeran is.

WEEKEND In Hackney, it's always the first day of the rest of your week. On Thursday you can go to an an exhibition in a Hoxton gallery, but remember to walk pretending you're on your way out. Local TV presenter Billie JD Porter (google her) once described this facetious fatigue as 'facetious-phew'. As the weekends role on you may find yourself at a 'party' in at the Ace Hotel's basement. A few local legends you should tweet and to ask to hang with at Bardens Boudoir in Dalston, are Fred Macpherson (@fredmacpherson) from the band Spector, George Craig (@Georgecraigonothen) from the band One Night Only and girlfriend Diana Vickers (@DianaVickers) from the band Diana Vickers. plus One Direction diva Lou Teasdale (@louteasdale). Another person to mention is Django Chan-Reeves (@DjangoCR) who has been in an ad to raise awareness for Youth Unemployment by Benetton and now works at House Of Hackney, a stronghold of desire on Shoreditch High Street.

Never say the word ‘sorry’ on busses or anywhere in East London. Use ‘Soz’ instead.

BEST NEW VENUE A place called Hurwundeki on 299 Railway Arches (Cambridge Heath) is a Korean diner which is also a hairdresser. You get your hair cut worth by the time it is being cut, as a default a 15 minute job costs 9 for men and 14 for women. The 15 minutes is a concept invented by Ki Lee, the founder and creative director of the venue (@_fifteen_15). When the time is up you're supposed to step into the food area and get a £7 bibimbap dish, or walk away and be considered rude.

APOLOGIES Never say the word 'sorry' on busses or anywhere in East London. Use 'Soz' instead. Even if it's a big apology, soz makes it sound more banal, casual banal. Soz not soz. Use other words like whateves, wheneves, and spell perhaps with an apostrophe - p'rhps, as nothing is concrete here and no meeting is an actual meeting before you call someone from downstairs. Yolo fever.

Words by Nimrod Kamer, who also wrote this.