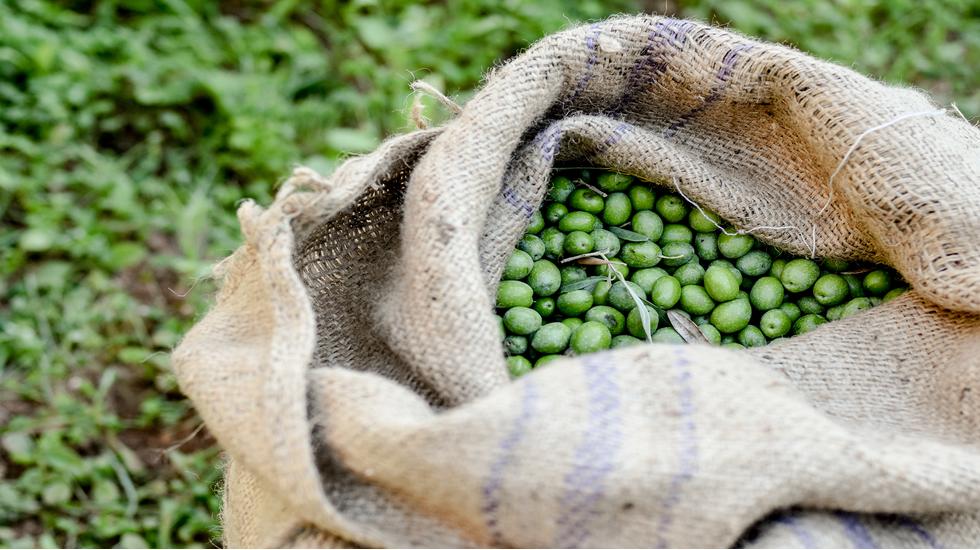 Along with grapes and grain, it was the humble olive that enabled an ancient civilisation to build the great Greek temples of Sicily back in 7th century BC. With no temples to build but plenty of pasta sauce to make, one family's annual olive harvest produces a year's worth of organic olive oil for friends and family.

It's 23 degrees in mid-October in western Sicily, yet Marcello Manzo is dressed for deepest winter. Wearing a thick, woolly cardigan, corduroy trousers and a tweed flat cap, he triumphantly marches into the olive grove bearing a plate piled high with cannoli - traditional Sicilian ricotta-filled pastries.

We're on the grounds of Villa Santa Maria, a 17th-century monastery-turned-holiday-home that has been in the Manzo family for over a hundred years. The turreted, honey-coloured baglio (farmhouse) is surrounded by vineyards, a reminder that it was once the setting for a wine business. But now it's the olives that take centre stage.

During Villa Santa Maria's week-long olive harvest, half a dozen local pickers work their way through the neat line of 160 trees packed with fruit ready to be plucked. Their faces tanned and marked by the strong Sicilian sun, they're here from 8AM until the sun begins its gradual descent. They work as quickly as they can, with various members of the Manzo clan taking turns throughout the day. The yield is split 50/50 on a sharecropping basis between pickers and landowner as is the custom here. The days are long days and Marcello's cannoli come as a welcome break.

The work is satisfyingly methodical - they pick as a team, tree by tree, some up wooden ladders, others down below. Spread underneath the trees are green mesh nets to catch the olives. Occasionally they share a joke in Sicilian dialect, but otherwise silence is broken only by the rhythmic "plop" of falling fruit.

The handpicking method may be time consuming but the results are worth it, promises Marcello and his English wife Caroline; they've been producing their organic extra-virgin olive oil for six years now. "The secret to good olive oil is to pick when the fruit is still on the trees and barely ripe," Marcello confides. "In some parts of Italy, like Calabria, and in Spain, they use machines - or even worse, wait for the fruit to fall from the trees," he grimaces. "That's not good."

As the light turns from rose-pink to pale gold and the temperature drops a few degrees, Marcello and head picker Santoro - whose sunglasses seem to be a permanent facial fixture - start to fill recycled coffee sacks with the little green jewels to take together to the local mill (or frantoio as it's called here). "I think I'm turning into an olive!" puffs Santoro, heaving the last sack into the boot of a battered 1995 Volvo Estate. They both laugh, and set off down the palm tree-lined driveway towards the mill.

Surrounded by flat, empty land 4km from Villa Santa Maria, the Agropan mill is a hive of activity during October and November. Plastic crates of barely ripe green and black olives are stacked high, waiting to be weighed, washed and processed. Industrial machines hum and roar and the familiar aroma of quality olive oil perfumes the air.

Each farmer's olives are processed separately. They're given a number for every crate they fill, and allocated a time over the next 24 hours. What slot they get is pot luck - it could be 4pm or 4am. "The most important thing is that the olives are pressed very soon after they're picked", says Antonio Pipitone, the mill's chief agronomist. He's been in the olive business for 30 years now, and still talks about the process with shining eyes. "I worked in the wine industry before," he confides, "but I found my true calling in the humble olive".

After a cold wash, the olives are churned into a paste (that looks a lot like pesto) through a trough with spiral mixing blades. The oil is then separated from the olive's crushed flesh, stone and water through a centrifuge system before pouring out the other end. The whole process takes about an hour, during which a cluster of middle-aged men huddle by the machines - watching, waiting as their precious olives meet their liquid fate.

"You can taste the fruits of our land in our oil; orange blossom, artichokes, tomatoes…it's all there" Pipitone had promised me. While different provinces favour different olive varieties, here in Mazara and the Val di Belice it's the green Nocellara olive that's most commonly used for oil. Its strong and spicy characteristics cater to Sicilian tastes. Some producers blend it with the more delicate Bianca Lilla olive or the Cerasuola olive for a subtler flavour, but many, like Marcello, prefer to keep it pure and punchy.

A year's supply of olive oil

Back at Villa Santa Maria, a production line has formed in the garden underneath the shade of the lemon trees. Now that the picking is over, the Manzo family spend an afternoon decanting the extra-virgin organic oil from big drums into 500ml tins (for easy transportation). Next, they stick on the Santa Maria labels once used for the estate's wine production all those years ago. It's been a successful harvest - 800 litres of oil to store in the pantry for 12 months' worth of seasoning, cooking and marinating.

This year's oil is spicier than usual with very low acidity, Marcello proudly tells me. "It will taste even better after settling for two weeks or so," he says as he wipes off the last bit of spilt liquid from the wooden tables. Next week, his brother Silvio starts his olive harvest on the neighbouring groves, but for Marcello and Caroline, it's a wrap.

For the umpteenth time this week, I dab a chunk of rustic local pane encrusted with sesame seeds into a bowl of bottle-green oil and watch it absorb the liquid like a sponge before savouring its fresh, aromatic flavour. Two and a half thousand years ago the Sicilian Greeks were savouring durum wheat bread with local olive oil this very same way. I recall Pipitone's words: "You can taste the fruits of our land in our oil..." And he was right, although not just the flavours of Sicily but also its history and memories of things past.