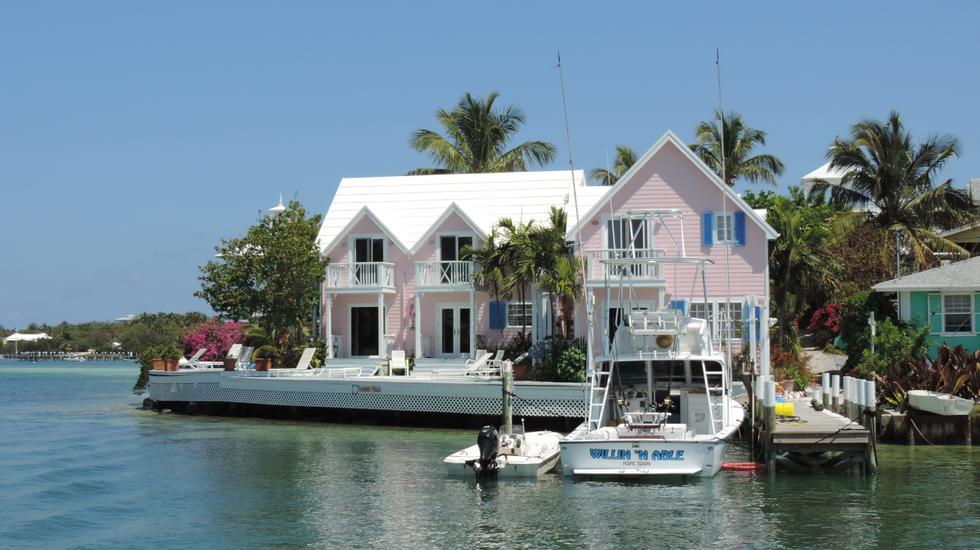 I I was newly single and looking for adventure... after considering everything from trekking in Nepal to yoga in Bali, I decided to book a last-minute flight to join my brother on a boys' fishing trip in The Bahamas.

I arrived in Treasure Cay, a coastal village on the Bahamian island of Abaco, to little or no welcome from the crowd of men. It was clear that this was not going to be the typical beach holiday; we were here to fish, end of story.

That evening, I knocked back several rum punches while trying to keep up with the pace, set my alarm for 6am and fell asleep as soon as my head hit the pillow. I woke up the next morning and packed a bag for a day on the boat.

We left Treasure Cay Marina at dawn, passing shallow turquoise waters and secluded sandy beaches until we reached the Atlantic Ocean. The vast expanse of deep blue stretched as far as the eye could see and the only other sign of life came from shoals of jumping tuna on the horizon.

The boys quickly dropped their lines and we began trawling. Several hours passed without a single bite. However, the sight of bottlenose dolphins performing acrobatics as they fed kept my spirits high. We trawled as far as Green Turtle Cay - an island 8 miles north of Treasure Cay - and decided to stop for lunch. The pastel-coloured clapboard restaurants all offered a similar menu of local fish - blackened grouper burgers, coconut-cracked conch and mahi mahi caesar salad, all served with a mountain of fries and coleslaw.

Each day followed a similar pattern, the only variant being the weather. Being a series of tiny islands there was no point in checking the local forecast. Instead, a nominated member of the group drove to the tip of the island to check the size of the breaking waves.

One morning we decided to head out despite the gusty winds. As we reached the pass through to the ocean I quickly spottted the 20ft swell rolling in and knew I was in for a rough ride. Within minutes of casting the lines we caught a mahi mahi, its green, blue and yellow scales shimmering in the sunlight. Happy with their catch and aware of the stormy seas the boys turned back, trawling for the last few miles. With our anticipation mellowed I sat back and listened to them compare fishing superstitions - their excuse for opening the first beer at 9.30am.

All of sudden one of the reels began to screech and we spotted a white marlin jumping 40yards behind the boat. My brother has been fishing in The Abacos for twenty years and this was his first marlin. We were all assigned jobs, mine being to capture photographic evidence of this momentous occasion. I struggled as the incredible bill fish leapt in and out of the water at high speed. Once landed and admired, the marlin was returned to the ocean to fight another day. Fishing really is a sport out there. After all the excitement I had forgotten we had to cross the treacherous swell before we reached the calm waters protected by the islands. I closed my eyes and didn't open them again for twenty minutes.

Safely back on dry land, the guys rushed to the marina store to purchase fishing flags to proudly fly from the outriggers of our boat. Meanwhile I walked the length of the pontoon as other boats brought in their catch.

The Canadians next door were keen snorkelers and returned most days with buckets of spiny lobster they had speared on the sheltered reefs dotted all around the Abaco Islands. We filleted the mahi mahi and covered it in ginger & chilli before putting it straight on the barbecue. It had to be the freshest, sweetest fish I had ever eaten. It took us two evenings to finish every last morsel of the 12lb fish. Over the duration of our stay we feasted on fresh tuna, snapper and wahoo.

As the days passed we visited Hope Town, Man-O-War, Great Guana Cay and countless uninhabited islands. We discovered spots where sting rays were playing in the shallow waters and turtles dove amongst the sea grass. The luxury of having our own boat made this experience more unique than I ever could have imagined.

There were only a couple of days when I decided to stay behind and explore the island. I walked the three and half mile stretch of white sand collecting shells, perfectly rounded sand-dollars and pinky orange sunrises. Most evenings, we regrouped at the bar where the locals performed a traditional Junkanoo - the Bahamian answer to Mardi Gras or Rio Carnival. The colourful parade of dance, music and costume was infectious and a far cry from Friday nights in London.

I returned home excited for my next adventure. If I'm going to be single for a while, I'm going to make the most of my freedom to travel. Next stop… surfing in Morocco?