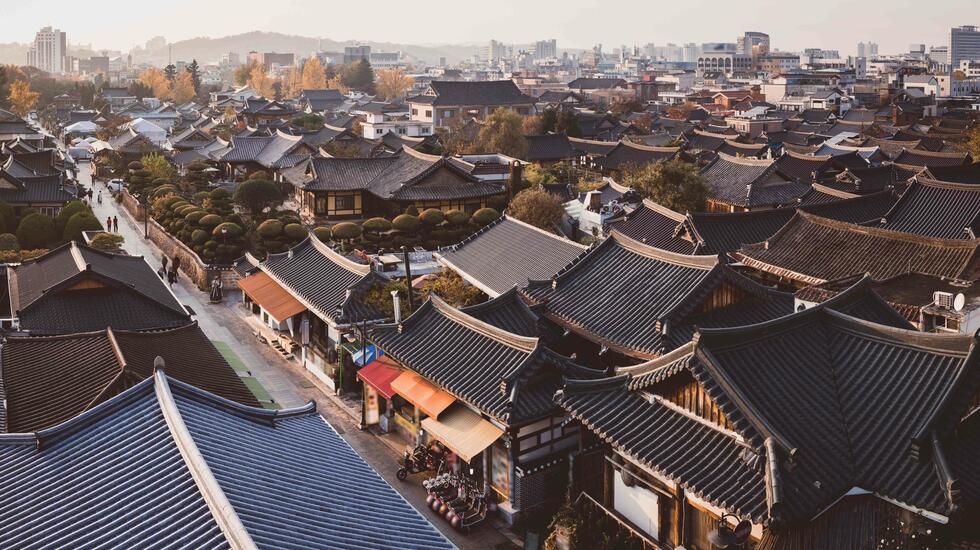 Been Been seduced by the hyperspeed sexiness of Seoul? As much as the South Korean metropolis makes us go all giddy inside, we've found that our favourite destinations across the peninsula are decidedly more analogue than the big city itself. Places where pulsating billboards are swapped for swooping hanok rooftops, daring street style for wooden-masked folk dancers and the caws of Noraebang karaoke devotees for the sonorous piping of a traditional piri instrument drifting from a window on a late-night sojourn. Visit Seoul, soak up the K-culture (or should that be Kulture?), but make sure to jump on the KTX, a ticket to one of these five South Korean cities in hand, too.

Don't call us nerds, but when on tour, we're always guzzling up guidebooks, so South Korea's unofficial history town sends us a little bit hysterical. Gyeongju, known as the "museum without walls", is a pocket-sized city crammed with ancient sites and historic buildings dating back to the seventh-century Silla Kingdom. Swoon. Museum tickets aren't needed; you can spot swooping hanok rooftops at every turn, and, right in the city centre, the public Tumuli Park coddles numerous vast, grassy hillocks that are the burial grounds of past kings and queens. Head out east to explore the Unesco-protected Bulguksa temple, a historic collection of pagodas, shrines and buildings that have stood here since the sixth century, and are still in use by the country's largest Buddhist order, the Yogye. Elsewhere, you'll find East Asia's oldest astronomical observatory, Cheomseongdae, sitting squatly (they didn't build high back then) in another free-to-visit city park.

Prepare to sink a soju (or three) in Andong. The birthplace of Korea's famous firewater isn't afraid of its mind-bending hooch. Beyond the booze, there's plenty more that demands our attention in this eastern city. Andong is the country's folk capital, so a night inside a traditional, 600-year-old home in the Unesco-listed Hahoe Folk Village is top of our list. Then, there's the city's mask museum, a temple to traditional talchum storytelling. After ogling the expressive wooden masks used during the dances, we're stopping in on the Folk Museum to learn about the ins and outs of the city's Confucian culture, and to gawp at elegant porcelain pottery and traditionally made paper crafts. Learn the story behind soju at the dedicated museum (spoiler: invading Mongols are involved), or, if you're feeling a bit queasy at the 40 per cent ABV of the chest-warming spirit, take a seat at the Andong Brewing bar, a craft beer pit stop pouring creatively flavoured pints.

Where to stay: Jukjeon Traditional House

We weren't going to mention any more Kulture, but… The sweet-potato shaped island of Jeju, some 80km off Korea's southern coast, is a hotbed of small-screen activity. The dramatic natural scenery and quirky, small-town feel have earned it a recurring role in some of the country's best-loved TV shows. There's something else here that's making us all starry-eyed, though. Jeju's other famous faces are the haenyeo - the women free divers, some of them in their 80s, who harvest abalone and other shellfish from the steel-grey sea. Head to the 10m-tall volcanic Yongduam Rock on the coastal stretch of the island's eponymous main town to see them in action. Not unexpectedly, seafood is huge in Jeju (hence the towers of fish-filled tanks outside city restaurants). Head a little out of town to find the neighbourhood joint Hwae Shim and try their soba noodle broths topped with hwae (raw fish, prepared in a similar way to sashimi). Don't miss the pot plant-hung Innisfree Jeju House in the east of the island, either. Whip up soaps and bath bombs with the maestros behind the K-Beauty brand at the showroom, workshop and café.

Where to stay: Hotel Leo

Tucked between dinner plate-flat plains and mountains swirled by meringue-like clouds in the country's south-west, you'll find Jeonju and its impressive kitchen credentials. We didn't recognise the thick, tar-like soy sauce served with our traditional bibimbap at Hanguk-jip (2-1 Jeon-dong, Wansan-gu), but it turns out that artisan makers in the city ferment the condiment for more than five years to create a traditional-style sauce that's far superior to the stuff we're used to seeing in the UK. Other obsessed-over foods in this Unesco "taste city" include street-food snacks of fried squid and fiery KFC bought beneath sky-pointing cornices in the historic Hanok Village neighbourhood, and banchan-style dining (sharing dishes served to the whole table - yes, Jeolla province is the OG home of small plates dining). Tour guides will take you to traditional teahouses, but Jeonju's creative crowd prefers Coffee Street (real name, Jeonju Gaekridan-gil), a café-crazed throughway packed with terrazzo tiles, bare bulbs and pour-over paraphernalia. Head for the bright blue exterior of Onuldo Dugeun-dugeun for moka pot coffee drunk at traditionally low - but distinctly mid-century - tables.

Where to stay: N Bridge Hotel

There's one reason we're itching to touch down in Incheon: a distinctive airport hotel. A polished concrete, brutalist palace of a property, Nest Hotel might sit under numerous flight paths, but its stripped-back, minimalist interiors, cubism-inspired communal spaces and tideland-gazing rooms (that face mist-cloaked landscapes rather than runways) are reason enough for us to deliberately miss our Korean Air flight. The city itself - which, admittedly, is a 50-minute train ride from the hotel - is a Seoul-rivalling port metropolis of glittering skyscrapers interspersed with pristinely kept parks. We're skipping the Central Park-inspired Songdo greenway and Grand Park's formal borders (inspired by European horticulture) and heading to the city's nearby coastal island, Muuido, to drink in sea views and dig our toes into the sand. Eurwangni and Dongmak are two beaches worth visiting. Back in the city proper, an ornate, 11m-tall gateway guards the entrance to Korea's only official Chinatown - and multitudinous dinner options, from mandu dumplings and Beijing duck, to sizzling Sichuan-style seafood.

Where to stay: Nest Hotel