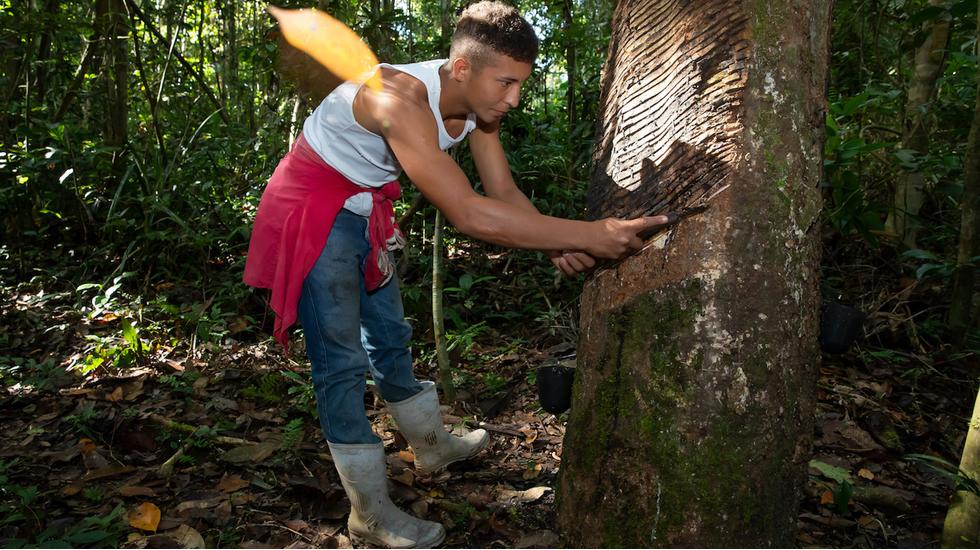 Amazonian rubber is back in demand thanks to ethical footwear brand Veja (and Meghan Markle). In Brazil, we traced the natural material from sapling to shoe, and met the seringueiros set to become the guardians of the forest.

"The rainforest is like my second mother," says José Ribamar as he surveys the rich Amazonian landscape around us. "It provides the air that we breathe: we depend and live on the forest." Clutching a 10-inch machete, he smiles as he wanders off down a dirt-track towards his home, a two-hour walk away. Behind him, children kick a football around a grassy clearing and a man clambers onto his horse.

Ribamar lives in the Brazilian state of Acre and works as a traditional seringueiro - he extracts wild rubber from the region's native rubber trees. This morning he came to this remote glade in the forest, along with around 20 other local seringueiros, to discuss the future of his trade and the future of his forest. Both have been in danger for many decades due to cattle farming and illegal deforestation. However, thanks to a French shoe company, wild Amazonian rubber is back in demand.

Veja is an ethical footwear brand born in 2005. Co-founded by school friends Sébastien Kopp and François Ghislain Morillion, its goal is to create trainers that are ecologically conscious and fairly produced.

"A lot of people think we're just a vegan shoe company but we use all types of materials including leathers and recycled plastics," Kopp says. "I don't like saying we have a mission but what moves us is to go further, always further into the transparency movement. Our aim is not to change reality - we are just a drop of water in the ocean - but we want to do our work in the best way that we can."

The soles of most modern trainers are made from synthetic rubber, which is derived from oil, so Veja began working with several small co-operatives in Brazil to source wild rubber. Veja also uses organic, fair-trade cotton, B-Mesh made from recycled plastic bottles, and CWL, a vegan and bio-sourced material which is an alternative to leather and plastic.

Its clean, minimalist designs hit the mainstream recently after Meghan Markle wore the V10 model. However, the name Veja, which means "look" in Portuguese, implores customers to look beyond aesthetics into the true story of how their shoes are made. And that's exactly why I travelled to Brazil.

My journey began in the dusty town of Xapuri on the fringe of the Amazon. As the setting sun painted the sky tangerine and neon pink, I visited the local cinema to watch a documentary called "Empate" about the fraught historical narrative surrounding rubber-tapping.

The film told the story of Chico Mendes, an activist who led a series of peaceful protests in the 70s and 80s in which seringueiros and their families dissuaded would-be loggers and cattle farmers from cutting down the trees.

Mendes was assassinated in 1988. Since his death, the Amazon has suffered vast destruction. According to data from the Brazilian government's satellite monitoring agency, TerraBrasilis, it lost the equivalent to two football pitches every minute for 31 days in May 2019. Veja's founders know this trajectory will be hard to reverse.

"We don't want to say that 'Veja is saving the Amazon by employing seringueiros' because I think the reality is much more complicated," Kopp explains. "The seringueiros can also be the destroyers of the forest if they choose to be. Our job is to push them, to say 'you can be the guardians' and 'it's cooler for you this way, you will make more money out of it'."

The next morning we followed the road out of Xapuri towards the Chico Mendes Extractive Reserve, passing countless cattle fields along the way. Eventually a bright terracotta dirt-track led us to a murky riverboat crossing. When we cut the boat's engine, we realised the air was alive with the sound of the Amazon: birdsong, monkeys laughing and insects pulsating.

The local seringueiros, who had been waiting for us on the other side, introduced themselves one by one; some had never seen foreign people before. Speaking in Portuguese, Kopp thanked them for their work and told them: "In each shoe there is a bit of the forest and a bit of each of you."

Later, Ribamar told me more about his job. "I wake up at 4.30am to go to the rubber trail, then it's five or six hours walking the path and I finish at 11am," he said. "Why so early?" I quizzed. "Because rubber trees are more productive in the early hours of the day than the afternoon," he replied.

That evening, I was invited to sleep in a hammock in one of the local seringueiro's homes; the night-time was surprisingly cold and my sleep was blighted by mosquitoes and cockroaches, but my hosts were generous and warm.

We woke early the following morning and one of the community's older seringueiros, Barbosa de Aquino, took us deep into the forest to show us his rubber trail. The forest's canopy was not as tall as I'd imagined but the forest floor was dense with tropical vegetation. Rubber trees were few and far between.

Aquino told me a seringueiro's trail may contain around 150 wild trees scattered throughout the forest. Each one must be cut with a knife along a diagonal line about 20cm long and 1cm deep. When cut correctly, a white, milky substance - liquid rubber - will slowly trickle down the newly-cut groove and into a small black pot.

Aquino was teaching a younger seringueiro named Dionio Araujo Guimarães while being shadowed by his enthusiastic grandchild. "This rubber tree is around 100 years old or more," he said. "I believe it's been tapped for around 80 years. You can see how the scars have stretched upwards as the tree has grown. If the cut goes too deep it will damage the tree and force the tree to give more milk than it can afford; it doesn't have enough time to rest. Our Veja contracts say we have to preserve them."

Veja has many other fair-trade agreements and eco-conscious policies in its company manifesto to ensure the soil, the trees and the communities are protected. "For example, we don't buy monoculture," says Morillion. "The cotton farmers have to plant at least three other crops to lower their risk because cotton is more susceptible to attack than corn or beans."

Most strikingly, Veja voluntarily offers a high price for wild rubber which is uncorrelated to the global market; instead they agree a fixed, fair-trade price that will last several years. The wage is so good that in eight mornings on the rubber trail, the seringueiros can earn the equivalent of 30 days' minimum wage.

Ribamar said: "At the market price the forest was in danger because there was no value in keeping the trees up. Yet because of Veja, now we have motivation to go back to rubber tapping. For me it's a lot more profitable than my other work."

Kopp told me that Veja can only afford to pay such prices because of its unusual business model: Veja does not spend a penny on advertising. Instead it invests purely in its produce and its workers. This allows it to sell its trainers at a comparable overall price to those of Nike and Adidas. Incidentally, both of those brands have moved into the sustainable footwear market recently - but Kopp isn't convinced of their authenticity.

"A lot of the big companies are posturing, but I don't like to criticise" he said. "We are also imperfect. I think by saying that we are imperfect and by being honest on our website, we are saying the reality - and that's what's important to us." Indeed, Kopp is quick to point out that Veja blends wild rubber with synthetic rubber to make a composite product, because natural rubber simply isn't durable enough.

After my night in the rainforest, I followed the rubber south to Porto Alegre, the so-called "shoe capital" of Brazil. Morillion and Kopp produce their shoes in factories here which are chosen for their ethical and environmental standards. At first, the bright, unnatural lights of the factory and the vast production line were an overwhelming sight. More than 250 people make each pair of shoes; every component is cut or stitched by one person before being placed on a conveyor belt and sent to the next.

At one station a woman examined stitching guidelines under an ultraviolet light; at another, a worker collected scraps of rubber for recycling to ensure zero waste. "It's like making a puzzle," said Morillion. "Whenever something goes wrong we try to undo it and re-use it."

Eventually the raw materials are transformed into recognisable vulcanised shoes and the finished products are packed inside boxes proudly marked "made in Brazil", ready to be shipped around the globe.

Back in the rainforest, the seringueiros said they are hopeful that as their trees grow, so will their relationship with Veja. One afternoon, Aquino's son, Sebastião, beckoned us to see his new agroforestry plantation where banana trees and tiny pink pineapples were growing side by side, overlooked by a family of monkeys. Among the fruits stood a row of immature rubber saplings which will be ready to tap in five years' time.

Kopp gazed around optimistically. He can tell these guardians of the forest are here to stay.