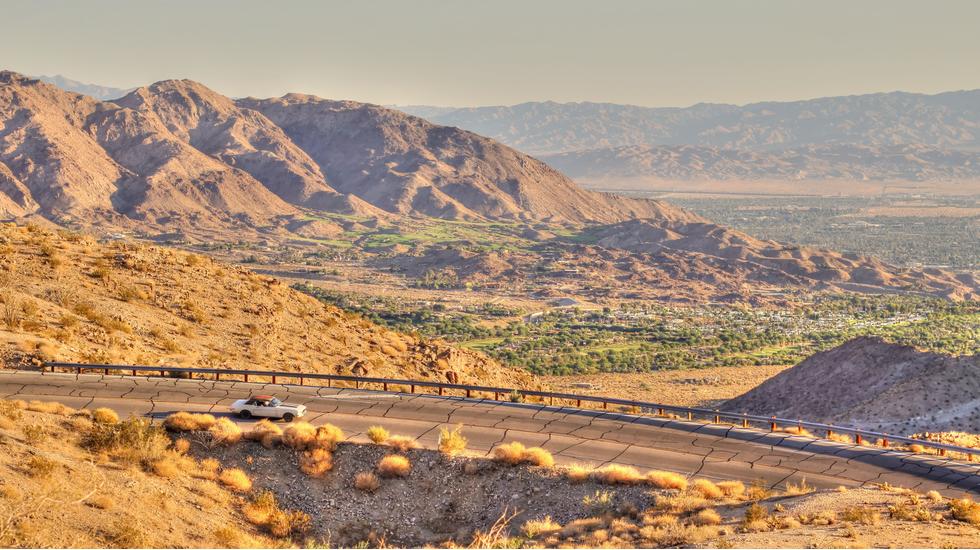 California California is what road-trip dreams are made of, with cities that sparkle with glamour and cultural significance, and easily accessible yet extravagantly beautiful natural scenery. There are Western-style frontier towns and desert moonscapes to the south-east, verdant and dramatic ancient forests to the north, laidback surf towns and sandy beaches hugging the Pacific Coast Highway to the west, and snow-capped mountains and soaring granite peaks in the rugged interior - all within easy reach of compelling and characterful cities across the state. Buckle up, your Californian road trip starts here.

Allow us to soften your landing at LAX: the new Hotel June West LA (a sister property to the chic - but pricier - Santa Monica Proper Hotel) enjoys a prime position just over a kilometre from the airport, and an easy 15-minute drive (or £7.50 Uber trip) from Venice Beach, one of LA's most diverse, progressive and walkable neighbourhoods. East-to-west jet lag generally has European travellers up at the crack of dawn: beat the queues at cult bakery Gjusta by arriving for breakfast at 7am, then rent a bike and cruise along the boardwalk to Santa Monica. Downtown LA is a 30-minute drive from the Hotel June, and it's worth the trip for a table at restauranteur Jon Yao's hit Taiwanese tasting-menu restaurant Kato, now in a bigger space in the buzzy ROW DTLA arts district complex of galleries, restaurants and design stores.

Most tourists head to Sonoma and Napa for their winelands fix, but the low-key local favourite, Temecula Valley, situated between Los Angeles and San Diego, is one of the state's best-kept secrets. Start with the much-loved Akash Winery, owned by the Patel family, where a rotation of local food trucks fuels a crowd sipping crisp rieslings and plummy zinfandels on the patio. Bed down in the fabulously quirky four-bedroom Hotel Temecula, a rustic and historic delight dating back to the early 19th century, and nix the wine haze with ham and eggs at the Swing Inn Café around the corner, before heading on to San Diego for a day of under-the-radar art shows, such as Wonderspaces, and the cultural anthropology collection Museum of Us.

It's easy to fall in love with liveable Californian cities like Los Angeles and San Diego, especially when you grasp how easy it is to escape the city for the beach, desert or forest. After a culture and taco fix in San Diego, schedule in some good old-fashioned R&R in the decadent desert enclaves of Greater Palm Springs, where Frank Sinatra and the Rat Pack built extravagant modernist homes during the 1940s and 1950s. Today, a bohemian, LGBTQ+-friendly party spirit prevails. Two Bunch Palms has recently been given a style and sustainability overhaul by new owner Erica Chang, a millennial wellness entrepreneur who upgraded this 1940s hot-springs hotel into a pioneering feel-good luxury retreat. Set the alarm early one morning to catch a searing-pink desert sunrise in Joshua Tree National Park, and stop for lunch at the Ace Hotel as you pass through Palm Springs.

Buckle up for a slow roll through two of Southern California's smallest and most seductive towns. Ojai is as famed for its bohemian, artsy community as it is for its orange and avocado groves and fertile farmland. Check into Ojai Rancho Inn and explore this laidback town on one of the hotel's cruisers, swinging by design-led stores In The Field, Summer Camp and Sam Roberts. Dine on vegan Mexican fare at Farmer and the Cook, then wake up early to hike the Shelf Road Trail, before setting off for Los Alamos.

At first glance, Los Alamos resembles a Western set, with vintage signage and historic facades. Look a little closer, however, and you'll spot cool bakeries like Bob's Well Bread Bakery, the female-owned Casa Dumetz Wines, with its lovely tasting room, and drinking dens such as the 1880 Union Saloon. As the gateway to the Santa Ynez Valley wine region, Los Alamos is prime mini-break material for food- and wine-loving Angelenos. The stylish Alamo Motel is a sister property to Ojai Rancho Inn, while the Skyview is a beautifully remodelled 1950s roadside motel with a pool, vineyard and fire pits made for stargazing.

Most visitors splurge on fancy honeymoon-grade lodges in Big Sur, but this extravagantly beautiful stretch of coastline is all about the outdoors, and camping among the redwoods at Ventana Campground is the best way to immerse yourself in the scenery that inspired writers like Henry Miller and Jack Kerouac. Lap up the local flavour (and exemplary huevos rancheros) at Deetjen's, hike the McWay Falls Overlook Trail, and follow that up with hearty soup and coffee at Big Sur Bakery, but mainly, get lost among the trees.

A little further north, the charming redwood-fringed coastal towns of Carmel and Monterey attract artists, art lovers and dedicated bon vivants. Carmel-by-the-Sea is a former artist colony where photographer Ansel Adams, author Beverly Cleary, and actors Doris Day and Clint Eastwood once resided, and it remains sophisticated and creative to this day, dotted with galleries, cafés and an unforgettable independent bookshop with a secret garden, Pilgrim's Way. The Cypress Inn, formerly co-owned by Doris Day, is a classy choice.

Monterey is the meatier of the two towns, synonymous with writer John Steinbeck, and the setting for his novel Cannery Row. A historic and fascinating destination, it is home to a world-class aquarium. Away from Fisherman's Wharf, Alta Bakery, which popped up in the film Big Little Lies, does reliably wonderful chocolate buckwheat cookies. Less publicised than the Steinbeck connection is the fact that Salvador Dalí lived in Monterey for eight years. The Salvador Dalí exhibition in the former Museum of Monterey comprises the largest private collection of the artist's works in the US.

San Francisco has been a politically progressive cultural incubator for decades, nurturing Beat Generation writers Jack Kerouac and Allen Ginsberg in the 1950s, giving rise to the counterculture and hippie movement of the late 1960s and 1970s, and sparking jazz, rock and alternative music scenes in the bars of Haight-Ashbury and beyond.

Today, San Francisco's longstanding commitment to social activism and political engagement is perhaps most tangible in the Mission District. Named after the Mission Dolores, dating back to 1776, the district has seen rapid gentrification, but the hipster vibe can't overpower its Latino roots. Old-school eateries such as Taqueria rub up against craft cocktail bars like Trick Dog and the innovative, Argentine-inspired Lolinda. The Mission wears its politics on its walls, with its hundreds of murals and street-art works, so prioritise a free murals tour by SF City Guides, starting at Precita Eyes Muralists HQ.

Bed down in the Phoenix Hotel in the Tenderloin District, a rebooted 1956 motel that has hosted Debbie Harry, Kurt Cobain, Neil Young and David Bowie. Just around the corner is the groundbreaking Asian Art Museum, one of the biggest Asian art collections in the world.

Ready to embark on your own epic Californian road trip? Visit britishairways.com/en-gb/destinations/california to book your dream California trip now.