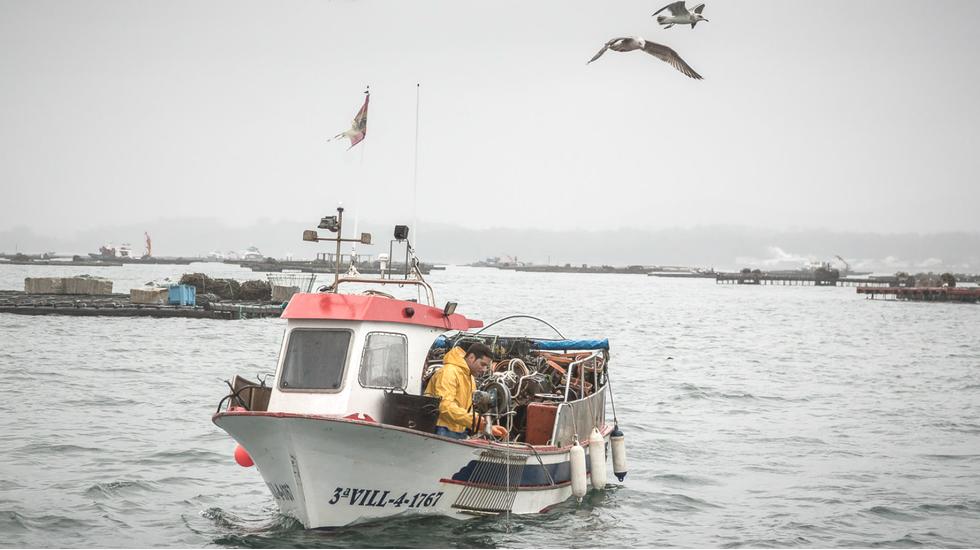 When you eat octopus from Galicia you'll think it's the best you've ever tasted. It's just everything about it: the way it's cooked, the wooden plate it's served on, the way they cut it with the scissors.

So So claims Nieves with an excitd grin as we wait to board our too-early flight. It might be known as a rather rainy, rugged region lacking the modish sex appeal of its northern Spanish siblings San Sebastián or Bilbao, but if you like seafood Galicia should be top of your travel hit list. The boiled octopus dish of which Nieves speaks ("pulpo a feira") is world-famous and underpins a proud regional food culture that hinges on the ocean. Over the next few days we'll find this out, sampling many plates of the meaty, paprika and olive oil doused local octopus, along with the juiciest clams, mussels, scallops, velvet crabs ("necoras") and fish, all packed with flavour thanks to the plankton-saturated, nutrient-rich waters of the crashing Atlantic.

The purpose of our trip is research. Nieves Barragán, previously the acclaimed executive chef at Barrafina, has just opened her restaurant Sabor (Spanish for "flavour") in the heart of London's West End. The opening strives to bring authentic flavours of Spain's regional cuisine to life. I feel incredibly lucky to have bagged a spot on one of the chef's exploration trips, which she undertakes every few months for inspiration. "I'm from Bilbao but I love Galicia," she says. "The cuisine is incredible. It's so simple but so delicious - I'm getting goosebumps just thinking about the clams."

While the seafood might be goosebump inducing enough to warrant a culinary pilgrimage, Galicia's capital - the UNESCO heritage town of Santiago de Compostela - is the final point of the legendary Camino de Santiago pilgrimage, a network of pathways established in the 9th century and walked by more than 300,000 people each year. Upon landing, we head to the old town to explore its famous cathedral, home to the shrine of St James the Great. Built between 1075 and 1122, it's all ornate carvings and gilded rooms with walls painted with scallop shells - a symbol used to guide pilgrims along the way.

A feast of market produce

Scallop shells planted firmly in our minds, we head to Abastos food market, where locals proudly display a wealth of fresh produce. Gnarly, fragrant tomatoes and bunches of vivid green brassicas known as "grelos" particularly excite Nieves; "these make the most delicious stew with pork and chickpeas, we have it on the menu at Sabor!" Inside the covered market, amid glass butcher cabinets filled with heavily salted pigs ears, snouts, and all kinds of cured meats, Sabor's energetic head chef Gisela Fernandez Moles buys us slices of warm Galician "empanada gallega". It's a sort of flat, filled bread pie made with a rich olive-oil dough stuffed with tuna, salt cod or octopus and a sweet mixture of onions and peppers. It's utterly moreish, greasy with olive oil, the fruity peppers and onions wonderfully offsetting the saline fish.

Window shopping has got us ravenous so we head to much-lauded restaurant just outside the market, Abastos 2.0, where chef Marcos Cerqueiro is making modern tapas with this feast of local ingredients. His cooking has impressed the likes of Rick Stein and - tasting dishes like sweet, creamy mussels with a kick of habanero chilli or sea-bass ceviche with crunchy sea salt and red onion - it's easy to understand why.

Over lunch, Nieves explains the mystical Galician ritual of cooking octopus in a copper pot - something she does at Sabor. "The copper changes flavour of octopus; it tastes more of octopus and it tenderises the meat." She swears by using frozen octopus that has been defrosted, cooking it for 20 minutes per kilo with one onion and a bay leaf, dipping it three times into the pot to curl the tentacles before fully immersing it.

Just as we're about to leave, Nieves disappears inside a deserted restaurant opposite only to reappear and hurriedly pull me inside, where I find chefs preparing a staff lunch of her beloved grelos. Recognising a fellow chef when they see one, they invite us into the kitchen where a huge metal tray is bubbling with chickpeas, pork knuckles and green brassicas. We stand around it and dip forks in; the chickpeas are creamy and comforting, the pork flavour-infusing the stew and the grelos lending a bitterness and bite that's utterly addictive. I can see why Nieves is so obsessed with this dish.

The following day we head to the coastal town of O Grove to meet Nieves' friend Berto Domíngues, the restaurateur behind legendary seafood restaurant D'Berto. First, we're to follow the trail of the ingredient so inherent to this region to its origin, with Nieves trying her hand at catching her first octopus.

It's a misty, rainy day with dramatic swathes of cloud sending pearlescent streaks across the darkened sky, but the clam-picking women of O Grove are out on the flat sands in force, collecting clams by the bucketload (some varieties fetch as much as 80 euros a kilo). Berto describes the four different types, bearing witness to the incredible biodiversity of the area. "This is the best, best, best," says Nieves excitedly, pointing at a "fina" clam. "It tastes like butter."

Once aboard the boat we share freshly baked tuna empanadas and a platter of the plumpest, richest mussels, sipping ice-cold Estrella completely unbothered by the fact it may be a little early. We stop at some mussel ropes to marvel at the layers of shimmering blue-black shells, each rope holding over 300kg of mussels, and are met by a fisherman who pulls up beside us in his little boat. He looks the part in his yellow macintosh. "His name is Felix," says Berto, "he's the best fisherman for velvet crab and octopus. His father was amazing, but he is better."

Nieves needs no encouragement to jump on board with Felix, and soon they are hoisting a glistening, undulating octopus out of its trap. "It's so heavy and strong it's pulling me down!" yells Nieves, taken aback by the agility of this muscular creature. For a moment our attention is grabbed away from the drama of the fishing boat as a school of dolphins leap from the waters beside us, pulling out the stops with their flamboyant aquatics. "Such exhibitionists" says Berto with an eye roll and a smile.

Meanwhile, Felix dispatches the octopus with expert efficiency and it changes colour from deep reddish-purple to white and then to grey as the life visibly fades from it. It's a confronting moment for us all and the respect is palpable among everyone on the boat.

A haven for seafood lovers

Our lunch at D'Berto is the most epic seafood feast. It's one of those restaurants where the smell grabs you first - the heady scent of universally good cooking; garlic gently infusing into warm oil; nutty shellfish changing colour on a hot grill - followed by the sight of tanks of hulking lobsters and langoustines as long as your arm. We sit around a large table in a light-filled room and settle in for the long haul as platters and plates of seafood emerge in a steady stream.

In the kitchen is Berto's sister Marisol, whose knack for cooking seafood is nothing short of remarkable. She treats each ingredient simply, respecting its freshness yet coaxing out the best flavour, often interfering no more than a light brush of olive oil, mild grilling and sprinkle of sea salt.

We gorge on mineral-rich oysters and raw clams, followed by revelatory black-queen scallops or "zanburinas" that have flesh like saline brown butter. We are incredibly lucky to taste these, Nieves explains: "Only 1000kg of these are caught each year, and Berto gets most of them - you only find them in four or five restaurants in Spain."

Tender razor clams come completely unadorned having been simply steamed a la plancha - and they're all the better for it. Next we taste the celebrated "fina" clams we'd seen earlier, swimming in olive oil and scattered with fresh pepper. Then it's time for the main event: the resplendent red palometer, a meaty, red fish with a bulging eyes that is sliced table-side and served with bowls of chips made from Galician potatoes. The flesh is creamy, meaty and gelatinous - reminiscent of dover sole - and we suck the bones clean.

It's one of those lunches that lasts through until evening, and while we might feel like eating again would recreate the "wafer-thin mint" scene from Monty Python, it's not long before we are winding our way to Xurxo, a family-run winery in the hills. Berto's friends give us glasses of buttery, sulphite-free Albariño fresh from the barrel, and in the kitchen, two stately women prep potatoes for tortillas with a dexterity that speaks of a lifetime's muscle memory.

Honing in on heritage

Galicia's pale, earthy potatoes are almost as prized as its seafood. They are slowly confit in olive oil before being folded into broken eggs with salt and cooked so the middle of the tortilla still oozes with golden yolk. Such is the traditional way, and how Nieves serves it at Sabor. What noble alchemy there is in taking three such simple ingredients and turning them into something so utterly pleasurable.

Meanwhile, another octopus boils in a copper pot. Once again we find ourselves gathered around a table, as glass after glass of local wine is poured and another banquet is offered up. A local Galician band plays bagpipes, a nod to Galicia's celtic heritage. Felix joins us (it's his octopus in the pot) and reports that another octopus he caught today escaped. "It's the most complicated creature in the sea", he explains us with an exasperated shrug.

A steaming platter of boiled potatoes topped with the octopus, sweet caramelised onions, paprika oil and big crispy chunks of salt is set down on the table. "I never eat octopus with water, only wine as it helps break it down," Felix proffers. We're certainly in the right place to observe that rule, but wine is not our sole beverage tonight. As we eat, Lis, the elderly proprietor of the eatery, stands in front of a flaming pot, this time filled with "orujo gallego", a proof-strength spirit that is distilled from wine and mixed with sugar, lemon peel and herbs before being set on fire. It's a traditional, spiritual Galician ritual called "Queimada", said to purge the body and soul, banishing negativity.

Lis strings a scallop shell around his neck and carefully ladles the elixir into ceramic cups. It's deeply herbal and sharply cut with lemon. Although it's been dancing with a green flame all night, the alcohol has certainly not all boiled off. Soon we are on our feet, dancing to the bagpipes, Berto spinning Nieves around as corks from the winery's natural fizz pop around us.

"I'm Basque, but I have no doubt that Galicia is special", Nieves yells at me above the music. "There is no point denying it - it's just a fact. That's the beauty."