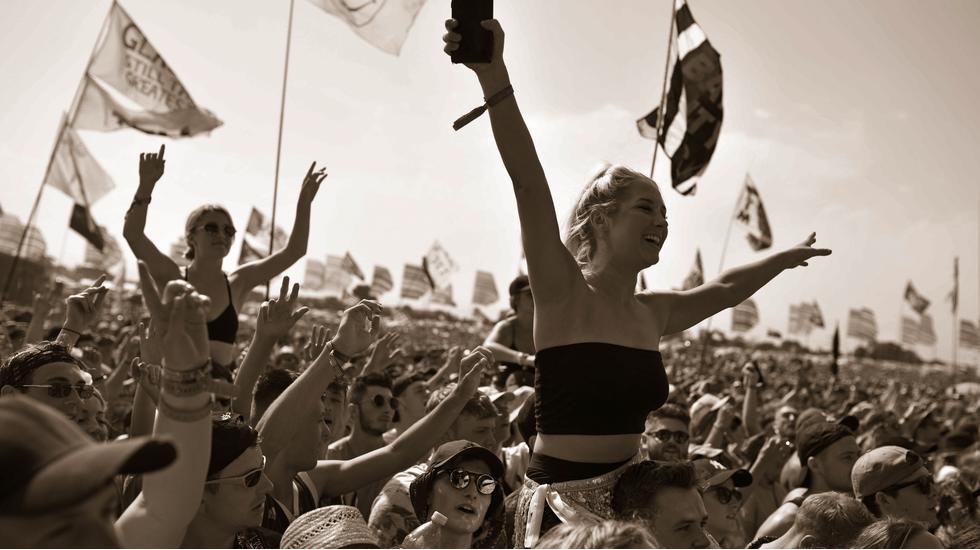 I I know there are children who grow up fixating on their wedding day or graduation ceremony, bar mitzvah or quinceañera. Happily, during my early teens, I was allowed to obsessively anticipate my first music festival. At 15, I was finally given the miraculous nod of approval to travel from Belfast with my friend Evelyn to Reading Festival. It changed my life. Of course it did; this is precisely what music festivals were intended to do.

I wore baggy Carhartt skater trousers with an "ironic" child's Barbie T-shirt over my shiny Wonderbra (the padding pockets were a great place to stash a crumpled tenner). I crowd-surfed to Rage Against the Machine. I subsisted entirely on a box of Farley's Rusks, impressed by the prominently displayed nutritional content, promising an abundance of riboflavin and thiamin. I kissed a tall, hairy French 21-year-old who looked like he could be in The Smashing Pumpkins. I met a crowd of impossibly cool older kids who were all planning to go and work in bars in Ibiza afterwards, which seemed the epitome of worldly sophistication. And I danced alongside thousands of people, in a field, bonded by a deep love of music and a shared desire to have a simply fabulous time.

In the 20th and 21st centuries, our political and cultural landscape has been shaped more significantly by music festivals than any other nation’s

I admit it was the music and hedonism that lured me through the security gates, but festivals work magic on the souls of music lovers, and that weekend meant so much more to me than a glorified gig. Festivals are platforms for influencing behaviour through the power of a progressively spirited collective, and I'd had three days exposed to new experiences, new people, new lifestyles, new habits, new political opinions.

During 2020, many snide comments have been made about "spoiled" millennials being bereft at missing out on a party or two. This devalues the impact festivals have had, not just on our cultural capital, but our socio-political landscape. Festivals are among our greatest cultural riches; it's devastating to think we might risk losing this.

Britain is arguably the most music-obsessed country on the planet. Music is in our blood, an everyday obsession, a gloriously democratic privilege, a signifier not of status but of sensibility. As food is to Italy, so music is to Britain; a pervasive, universal passion. In the UK you could easily find yourself chatting to a 15-year-old schoolgirl with an encyclopaedic knowledge of Frank Zappa records, a taxi driver who knows the lyrics to every Dolly Parton song, a school dinner lady who drives home to Black Sabbath. Music is a secondary language that every one of us understands, and for a small island, our contribution to pop music is wildly disproportionate. Britain can't claim to be the birthplace of the music festival, but in the 20th and 21st centuries, our political and cultural landscape has been shaped more significantly by music festivals than any other nation's.

The first documented music festival was the Pythian Games, a precursor of the Olympics, which was held from the late sixth century BCE at the sanctuary of Apollo at Delphi. Athletics were the main event, but it included musical competitions. During the Middle Ages, musical festivals marked the agricultural calendar. But the image most of us have in our heads when we picture a music festival first formed in the late 1960s and early 1970s, and since then, they've played pivotal roles in civil rights movements including so-called "women's lib", anti-racism and LGBTQ+ rights.

Woodstock Festival - billed as "an Aquarian Exposition: 3 Days of Peace & Music" took place in 1969, on a dairy farm in upstate New York. Max Yasgur, a 50-year-old Republican leased the land because he felt he could help bridge the generation gap and quell political tensions, particularly concerning the Vietnam War. "I'm a farmer. I don't know how to speak to 20 people at one time, let alone a crowd like this," he said when he addressed the masses on the final afternoon, just before Joe Cocker's set. "But I think you people have proven something to the world... that a half-million young people can get together and have three days of fun and music and have nothing but fun and music. God bless you for it." Yasgur was right; Woodstock spread a message of unity that went far beyond the perimeters of the farm, and progressed a number of social-protest movements of the 1960s - opposition to the Vietnam War, a push for free love and personal autonomy, a commitment to civil rights and equality.

Festivals are concerts, performances, parties, but they are also experiments in better ways of living as a collective

In Britain, Andrew Kerr, the co-founder of what became Glastonbury Festival, put on a free music festival after attending the more commercial Isle of Wight festival in 1970, announcing: "Man is fast ruining his environment. He is suffering the effects of pollution; from the neurosis brought about by a basically urban-industrial society: from the lack of spirituality in his life. The aims are, therefore: the conservation of our natural resources; a respect for nature and life; and a spiritual awakening."

These aims sound lofty, but festivals are allowed to be lofty, radical, experimental. The modern music festival was conceived as an intervention - a few days to shake up politics, our mental health, our lifestyle choices. Festivals are concerts, performances, parties, but they are also experiments in better ways of living as a collective; pop-up civilisations that thousands of revellers - entire generations - inhabit for a few days. Just three days can be enough time to change someone's life, our mindset, our habits, whether it's a spontaneous decision to try naked yoga, eat vegan food or dress in drag. More recently, Shambala was the first midsize British festival to go entirely meat and fish free; in 2019, I was at Glastonbury's first plastic-free festival, which weaned 175,000 people off single-use plastics in a weekend. Festivals work a form of gentle activism, nudging people out of whatever emotional, physical or political ruts we might be in.

No matter how many festivals I went to, I emerged transformed - and grubbier, and sleepier - by each one. I don't want to imagine a future me, without the tweaks and improvements and embellishments that every festival makes. And collectively, we should be fearful of a future without festivals. Festivals are incubators for societal change. We need them more now than ever. Just because festivals are fun, it doesn't mean they're not serious.