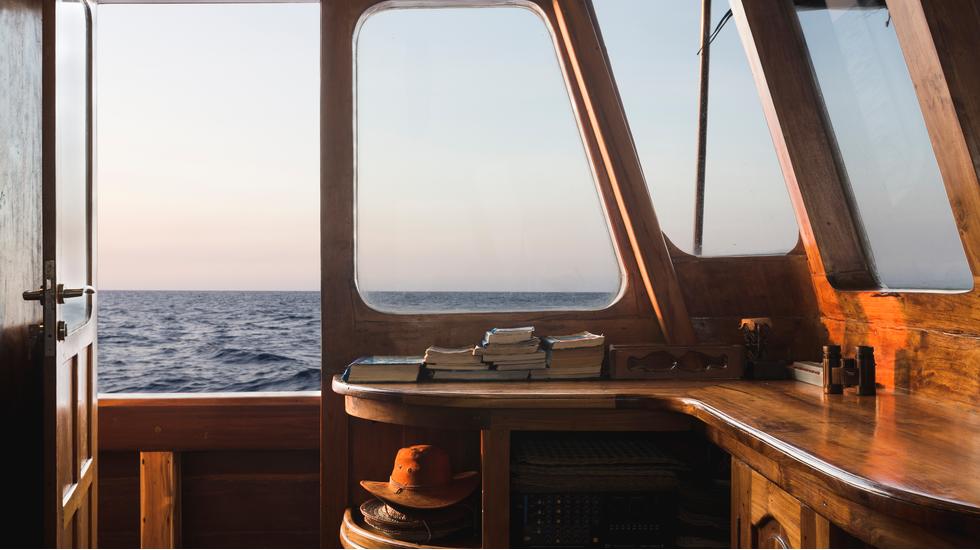 This article appears in Volume 25: The Pioneer Issue

With With the right wind you'll smell the Banda Islands before you see them. Also known as the Spice Islands, this archipelago of ten volcanic eruptions in the remote backwaters of the East Indies is so small that modern-day cartographers often overlook it. Yet in the 17th century, Portugal, Britain and Holland fought over them bitterly, for their mineral-rich soil nurtures a fragrant secret. They were the only place in the world where nutmegs grew, a spice once worth more than gold because of its exotic, romantic flavour and the fact that it was rumoured to cure the plague. In those days money quite literally grew on trees for those prepared to overcome shipwrecks, warring tribes and tropical diseases to claim the spice.

A phinisi (a traditional wooden vessel) named Tiger Blue is carrying me in the wake of explorers such as Sir Francis Drake, Ferdinand Magellan and countless others through the Maluku region to the Banda Islands. We're travelling 800 nautical miles over 11 days through the famously fierce Banda Sea from Maumere to Ambon, diving with hammerhead sharks, meeting local tribes and spotting sperm whales along the way. With just two other guests on board and a ten-strong crew of sea dogs and dive specialists, it doesn't get much more exclusive than this. A habitual landlubber, it's my first experience of living on a boat and I airily dismiss the captain's offer of a seasickness pill. How rough can the seas really be?

One of our first nights at sea answers my question. For hours I lurk in my cabin as three-metre waves pummel the ship from all sides. It bucks like a stallion and I can't help but think of the earthquake and tsunami that tragically struck Sulawesi the night before our trip, despite the fact we are more than 1,000km away. The crew are unfazed, shimmying up ladders made lethally slippery by the sea's spray as easily as a flight of stairs, while the chef coolly whips up a delicious spread of Indonesian dishes. We've been told that the best protection against seasickness is a full stomach, so I set to with gusto. Throughout our journey this beaming man cooks up everything from Lebanese mezze to crème brûlée that would put any Parisian bistro to shame in a kitchen smaller than a double bed.

The soft, peachy glow of sunrise filtering through the porthole wakes us gently. We've dropped anchor in the natural harbour of Kalabahi on Alors Island, a moon of water so enclosed it's as calm as a lake. The watery hills and lurching valleys of the night before seem but a distant dream. On the shore the outline of a mosque rises through the morning mist and the sound of the imam calling the people to prayer echoes across the glassy water. The silvery gleam of flying fish catches my eye and I look down. Local fishermen in wooden canoes are silently circling the boat, their faces shadows beneath wide-brimmed hats. A thin spire of smoke emerges from the dense forest that cloaks the hillside. It feels as if anything could happen.

A bumpy drive into the mountains and we are face-to-face with a group of elders from the Abui tribe, their teeth crimson with betel-nut juice. "They were headhunters until quite recently. Warlike peoples. Now their only chance to practise their traditions is when visitors come to the village," our guide Ahmed, a local tribesman himself, tells us. "See the little ones?" He gestures to several children watching the elders in awe. "This is how they learn the ways of their people. It protects their customs for the next generation and gives them the money to keep living in their ancestral homes."

The village feels as if it fell asleep several centuries ago and woke to find its thatched houses on stilts, the tribesmen's fierce swords and jangle of the women's heavy ankle rings severely at odds with the "new" world they find themselves in. It's a daily battle to prevent their culture from being eroded by the nearby town that is slowly spreading towards them. "It's mostly the very old and children who are here. The ocean takes the middle-aged to work on fishing boats. Those who are left are very worried about the tribe's future," Ahmed continues. Looking around I see a wily chief in a feathered headdress pulling on a Marlboro Red. When one of the women reaches into the folds of her ikat (a handwoven cloth that's unique to the region), pulls out a phone and asks for a selfie, the uneasy conflict between past and present is evident.

The region's natural wonders are also swimming hard against the tide of modernity and the consumerist culture that's so entwined with it. Once we pause in an inky channel because the crew have heard there might be dugongs (a manatee-like mammal) there. On a sand bar hundreds of miles from civilisation two shadowy figures appear and the ship's radio crackles. The local tribe wants to know our intentions. In exchange for a bag of rice and some fuel they're happy to let us look for the dugong Mawar ("Roses" in their language), but warn us not to swim with him. A commercial fishing boat killed his mate and he's so lonely there's a chance he may drag any living thing down to the depths for company. We spend a few minutes quietly floating in the bay until Mawar emerges of his own accord. Dugongs are often curious and he's keen to investigate. After a few minutes of swimming under and around us, he clutches the rubber side of the dinghy tightly in his flippers and looks at us with strangely human eyes. The boat is roughly seven feet long, the same size as him, and I have the uncomfortable suspicion it reminds him of his mate.

At Serua Island, where jets of warm air from a volcano nourish a thriving coral reef, we snorkel and dive. This volcanic spire is so steep that even the island's 100 residents have never been able to penetrate the thick jungle on its upper slopes and the mysterious creatures that live there may never be seen. Below water the reef is a whirligig of surreal corals - pink frills like a ballerina's tutu, bulging brains and upright antlers with flashes of electric blue darting between them, while the ominous shape of hammerhead sharks loom in the shadows of the drop.

A flash of yellow in a coral cave catches my eye - a butterfly or parrot fish, perhaps? Despite the fact that we're a 19-hour sail in any direction from another island it turns out to be an empty shampoo bottle, discarded in a moment and destined to pollute this reef for the foreseeable future. As I reach to pick it up a pair of clownfish swim out and nudge my hand away from their unusual home, while a translucent seahorse shyly curls itself around the neck of the bottle. It's a powerful reminder about the lasting impacts of single-use plastic. Tiger Blue tackles this problem head on, supplying us with reusable water bottles and eco-friendly toiletries that don't pollute the incredible seascapes that make our adventure possible.

As we sail on, the water becomes as blue as a peacock's tail. The boat's movements are more like the gentle rise and fall of a carousel pony than the bucking stallion of the nights before. Suddenly a dolphin leaps out of our bow wave, its back arching gleefully. The crew quickly lower the dinghy and as we zoom out the pod surrounds us, leaping and changing direction with our boat until it feels like we're actually part of it. Back on Tiger Blue I turn on my phone to Google what species they were. There's no signal and I find I'm content lying on the bow in the sun, feeling the spray on my skin and listening to the dolphins whistle.

Crossing the Banda Sea, the swell picks up again and the boat groans and creaks like an arthritis sufferer getting out of bed on a winter's morning. We shelter in our cabin watching the waves crash over the porthole. As night falls the sea calms a little and we climb to the top deck, where the captain scans the empty horizon. Dark ocean bleeds into sky and the creamy smudge of the Milky Way is reflected on the water. It feels like we're sailing through the stars.

When we finally reach the Banda Islands it seems as if we did, in fact, sail into another galaxy. A winding entrance between slopes cloaked in virgin jungle leads to an inland bay between Neira and the Api volcano, which occasionally belches evil-smelling smoke. Memories of the islands' pivotal role in history are everywhere. A Dutch fort looms above the jumble of colourful cottages that make up Neira town, while the waterfront is lined with once-grand colonial mansions, many with broken chandeliers and period furniture still languishing in their dusty rooms. On the side of the road a gentle street vendor asks if I'd like to buy any of the Dutch coins and rusty ship's parts that he digs up frequently in the harbour. The local houses are rainbow-coloured and bustling with life. Chickens peck among burning nutmeg shells in the yards - a local trick to ward off mosquitoes - while children jump in and out of the water, watched over by elderly men in longboats. As we pass by they smile and wave. Given that Indonesia's independence was only finally gained as recently as 1945, their friendliness seems generous.

Plants thrive on the volcanic soil. In the shade of an overgrown plantation our guide plucks the fruit of the nutmeg tree, split open just enough to reveal the nut in its mesh of dragon's-blood-red mace, and in the next movement peels back a strip of cinnamon bark. The sun-wizened nenek (grandma) who now owns the plantation shyly offers us cups of cinnamon and mace tea alongside crumbly sponge cake coated in nutmeg jam. One bite and we can see why people were once prepared to die for its heady, mystical taste. If the British hadn't plundered several hundred nutmeg seedlings from these fragrant gardens in the early 1800s and created their own plantations in Singapore and Ceylon, it's easy to imagine that the Banda Islands would be as highly contested now as they ever were.

As we prepare to leave the bay a kora-kora boat paddled by 34 of Neira's strongest men floats alongside us. They escort Tiger Blue out of their waters with a masculine display of synchronised rowing and chanting that demonstrates that this beautiful place has always been theirs, whatever the colonists may have believed.

Our journey continues past the island of Run. A sleepy speck just two miles long, it is so thick with nutmeg groves that the Dutch gave the British the island of Manhattan in exchange for it and considered this an excellent deal. We devour tuna sashimi that was caught just hours before and watch as the island's white sands and emerald jungles slide by. I vaguely think about taking a picture before realising I have no idea where my phone is. On a wooden sailing boat somewhere between the swells of the Banda Sea and fragrant shores of the Spice Islands, it seems that I have found something even more precious than nutmeg: the peace that comes from surrendering to the might and magic of the ocean.