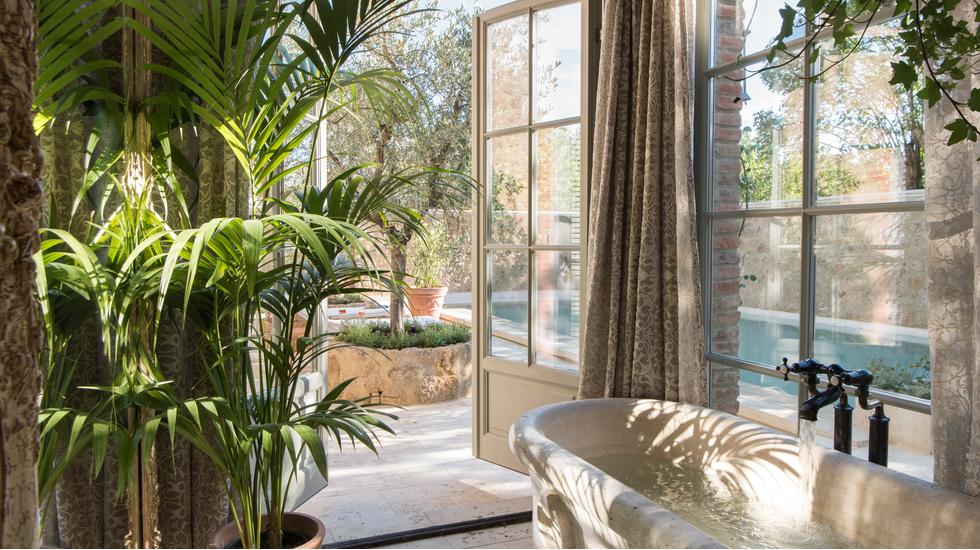 For For centuries, Italy has been famed for its pastel-hued coastal towns, flowing limoncello and beaches filled with sun-worshippers sprawled beside striped umbrellas. But now, faced with shifting tides due to the global pandemic, a few of the country's trailblazing hoteliers have found new ways to re-inspire travellers while retaining the familial intimacy long associated with Italian hospitality. The ritual of cheek kisses and aperitivo on packed terraces may be out the window (for now), but instead, a new era of ultra-private experiences, revamped guest rooms and designer collaborations are entering the limelight. Following one of the strictest lockdowns in all of Europe, these five Italian hotels have reopened with a refreshed perspective on a new kind of sweet life.

Perched on a cliffside overlooking Positano, Villa TreVille originally served as the clandestine home of famed director Franco Zeffirelli, who once hosted top-secret parties for visiting luminaries including Elizabeth Taylor, Laurence Olivier and Leonard Bernstein. Now a hotel with 17 suites spread across four villas, the secret's out about this celebrity hot spot with a picture-perfect view of the Vertical City. With its dedicated beach club and Italian restaurant helmed by chef Antonio Mellino, the hotel makes a case for appreciating Positano from afar rather than fighting through the crowds in town. Exploring the grounds peppered with bougainvillaea, hand-painted tiles and sculptural lamps by Moroccan designer Yahya Group conjures up a feeling of being in an old Hollywood movie. During lockdown, the hotel began the process of elevating its amenities. Many are now sustainably sourced, including all-natural beauty products from Vitalis Dr Joseph, Austrian honey and an artisanal selection of loose-leaf teas processed in Northern Italy. Even the stationery is sourced from local typographers Gutenberg '72. With plans to release packages that could make the hotel's hefty price tag more palatable to weekenders, Villa TreVille is in the process of transitioning from a hyper-exclusive estate to a luxury boutique hotel that pays homage to the creative forces that once summered here.

It's not every day you can sleep in a room filled with Pan Am memorabilia from the 50s or vintage Kodak signs and photographs. Taking an out-of-the-box approach to its interiors, Capri Tiberio Palace is the Blue Island's answer to a design lover's boutique hotel. You can't help but notice the eclectic details as soon as you step into the hotel's lobby, where the adjacent Jacky Bar exudes a feeling of mid-century Cuba, or the hotel's own Taschen Library of books covering art, design and philosophy. The property has worked with Italian designer Giampiero Panepinto to revamp its now-44 guest rooms. Each one-of-a-kind suite is decorated with a collection of curated vintage objects and custom textiles by Dedar & Limonta, giving guests a few new spaces to feel as if they stepped onto the set of Mad Men. With COVID-19 giving rise to more private-dining experiences, guests can opt to have their meals al fresco on one of the private terraces clad in tiles painted in the typical Vietri sul Mare-style. For a true treat, book the Bellevue Suite, which draws guests with a 360-degree view of Capri and a jacuzzi fit for a jet setter.

Le Sirenuse is Positano's prime place to see and be seen. Today, the 58-room seaside hotel, helmed by the Marchesi family, pays homage to its roots in arts and culture through design-forward interiors and artistic collaborations, plus fashion and homewares sold through its boutique, Emporio Sirenuse. Emerging from lockdown and set to make the most of the end of the summer season, the property has revamped its main hotel bar, dubbed "Don't Worry" as a nod to the bar's neon installation of the same name by British artist Martin Creed. Beyond sipping prosecco with a view, guests will have a chance to partake in new open-air experiences, including fishing excursions, wine tastings and visits to Positano's newly unearthed Roman Villa. The hotel recently released its latest design collaboration with London-based artist Luke Edward Hall, who has personalised a limited number of sustainable Veja sneakers with bold original artwork inspired by the Amalfi Coast. As if we needed another reason to shop on holiday, all proceeds from the collaboration will go to Friends of Naples, a charity that protects the artistic heritage of Campania's capital.

Tucked away in the charming town of Sant'Agata sui Due Golfi, the fifth-generation, family-run Don Alfonso 1890 is worth a journey off the beaten path, especially for the culinarily curious. The two-Michelin starred "restaurant with rooms" wows guests nightly with its new and historical creations including "il vesuvio di rigatoni" and lemon-cream dessert, two of the Laccarino family's classics. All of the dishes showcase the organic produce grown on the estate's eight-hectare farm in Punta Campanella, while meat, fish and dairy are sourced from top local producers. The interiors of the restaurant and eight guest rooms - accented with walls painted bubblegum pink, bright yellow and turquoise - were designed to reflect the bright colours of the Amalfi Coast while referencing the restaurant's global outposts in New Zealand, Macau and Toronto. With plans to open a new restaurant in St Louis, Missouri next year, Don Alfonso shows no signs of slowing down. For an after-dinner treat, explore the property's cellar, which holds a collection of more than 25,000 bottles of fine wine - the oldest one dating back to 1890 and the most expensive costing €27,000. The standout feature is the cellar's tunnels, however. Dug by Etruscans directly into the volcanic rock, the passageways are said to date back to the sixth century BCE.

Bringing new meaning to farm-to-table living in Tuscany, Borgo Santo Pietro is a five-star retreat comprising a 300-acre organic farm, vineyards, holistic spa and skincare laboratory, as well as a cooking school and Michelin-starred restaurant. While it's location in the lesser-known southwest of Tuscany (just 45 minutes' drive from Siena) may feel remote, the property prides itself on self-efficiency thanks to an on-site dairy that transforms sheep's milk into cheese and yogurt, plus its working farm featuring free-range chickens, honey bees and even alpacas, whose wool is used to craft blankets. Each of the 20 rooms in the 800-year-old farmhouse estate is decked out with custom antique furnishings, homegrown flower arrangements and fireplaces, making the quarters feel more like intimate fairy-tale cottages than hotel suites. Nevertheless, Danish couple and founders Jeanette and Claus Thottrup have taken a progressive approach to building their earthy empire. Last autumn, the property launched Seed to Skin, a skincare line that blends the natural benefits of herbal remedies with science-backed ingredients at its on-property laboratory. Guests can enjoy the benefits via the sumptuous in-room amenities or head to the spa for a signature Black Magic Glow Ritual facial. With plans to expand its skincare production facilities and start producing its own wines, Borgo continues to build on its "nurture via nature" concept.