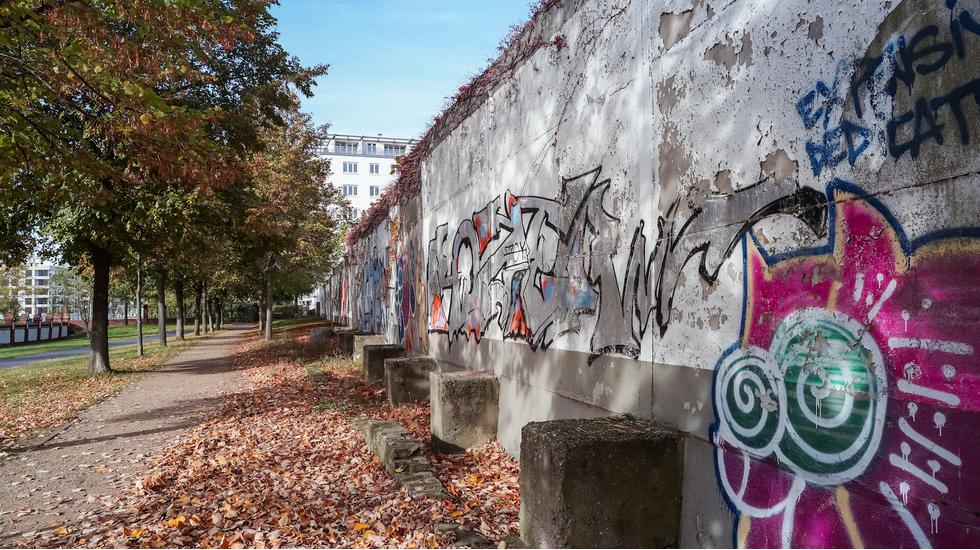 Thirty Thirty years since the fall of the Berlin Wall, the city is once again reflecting upon its inescapable past. Few places have such loaded and evocative connotations in the common psyche yet one could spend months exploring the city and only just scratch the surface of its weighty history.

The anniversary presents both an opportunity for the young to learn and for the older generation to tender a reality check. The whole thing could be unbearable, a hangover of the "wall sickness" suffered by those who lived under its shadow. But the city embodies a rebellious streak, a steadfast determination to stand up for the values of freedom and democracy.

Berlin is a city of makers, and a society that is responsive to creativity. It is through freedom of expression that it finds meaning in life, and holds perceptions to account. One of the most iconic examples is Thierry Noir, who moved to a West Berlin squat overlooking the wall in 1982.

He had a clear view of the patrolling guards and tells me, "Life by the wall was melancholic... there was no nature, no trees, only sand and watchtowers..." so he would paint giant, colourful murals of cartoon-like profiles on the wall as an act of defiance, to make it ridiculous and help destroy it. Now considered a forerunner of modern street art, Thierry's work can be taken as both a form of artistic expression and of political commentary.

He explains how the subculture was very strong at the time, attracting many alternative characters. "During the Allied occupation of West Berlin, no German soldiers were allowed to enter. It was easy for young people from West Germany who refused to join the army to come and escape army duties. It was a hard time to live, with very little money, but all of the people who were artists then are still artists now - that movement was very strong."

Thierry still lives in Berlin, and continues to paint. For the anniversary, he has collaborated with Hackney street artist STIK on a new artwork for the Imperial War Museum in London, called WALL. On original pieces of the wall, the pair have painted figures facing towards each other, the past engaging with the present.

When I ask him what the work means to him, he tells me we need to open our eyes to all the walls still standing around the world, often given new names to minimise the effects: separation line, peace border, green line, and the list goes on. "When you paint outside you change the city. The colour brings a smile to people's faces, one second of happiness... but the younger generation must not think the Berlin Wall was an art project. It was a deadly border."

His words echo in my head as I walk along the East Side Gallery, where teenagers pose for photos in front of murals commissioned 10 years ago on one of the few remaining strips of the wall. As I dodge the electric scooters littering the pavement, I come to realise it's a fine line we tread between reflection and being thankful to be free and alive now, a line that we are all navigating. In a moment of levity the next day, I try out a scooter through the Tiergarten, whizzing through the autumnal woods and coming out to face the imposing Brandenburg Gate.

What strikes me is how blissfully easily one can pass between East and West now. As we take a private bicycle tour along the old route of the wall, guided by academic Dr Lauren Van Vuuren, it's sometimes hard to tell which side we are on.

Lauren shows us one of the few remaining watchtowers, bought and turned into a museum by the brother of Gunter Litfin, the first victim of the wall who was shot trying to cross the nearby river. A block of flats has gone up around it and it obscures their view, but that's partly the point.

Streets that were once drab and oppressive are now yummy mummy territory, and the rents have crept up. Silver birch trees grow on the former death strip, nature coming back in stark contrast to other areas that have been deliberately left bare.

"There is no blueprint for how Germany should grow together. The process of reunification is ongoing and it will take another two generations for life to seem normal," explains Wolfram Putz from Graft architects. One of the most forward-thinking minds in Berlin, Wolfram is at the heart of the discourse on the regeneration and reconstruction of the city.

One could argue the art scene now defines Berlin to a considerable extent but its essence is shifting as time goes by. "Where once there were two authenticities, the official and the underground, now the counter culture is becoming professionalised," he continues. "I'm working on a big project with a co-operative which has been doing clubs. They came as squatters but have now turned 40, bought the land and want to do something good there for the community."

Wolfram does what he can to help heal the physical and mental divide, with a residential project at Checkpoint Charlie just one of Graft's many projects bridging the gap. The firm also put together a profound exhibition for the German Pavilion at the Architecture Biennale in Venice last year: Unbuilding Walls, and designed the Urban Nation Museum, the world's first museum of urban contemporary art.

He talks of the great optimism when the wall came down, "Those two months will never come back. It was like the end of the Great War. There was a feeling of lightness and connectivity to all other humans." Yet with new media, we are all connected much more easily nowadays. And creativity continues to thrive in the cultural hub.