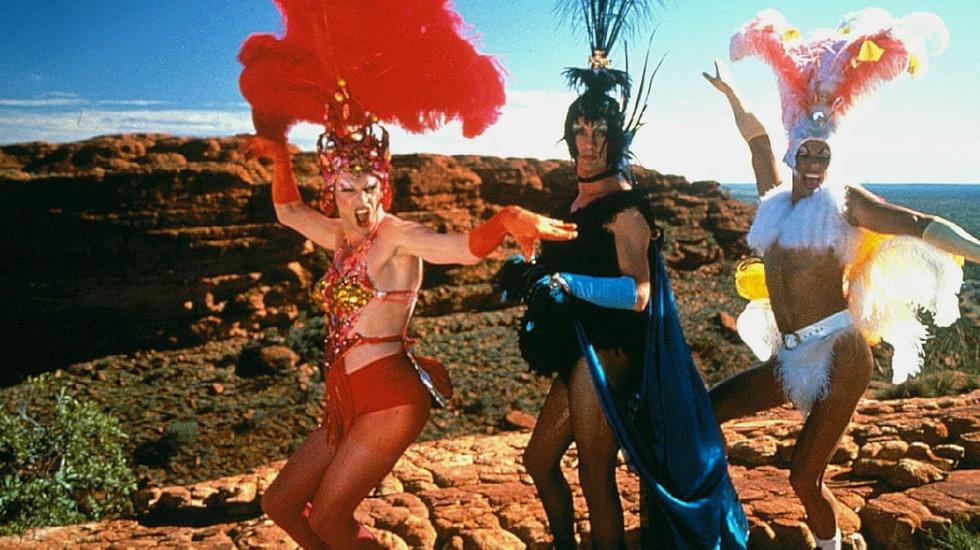 While While travel is an antidote to prejudice, it can be hard for us to fully understand what it means to be part of the LGBTQ+ community in the world's many corners. Queer culture isn't one size fits all.

Turning to the silver screen, we've picked out the films and documentaries that offer a window into hedonistic gay cruises around Europe, the subculture of trans sex workers in LA and a WLW relationship in an African country where homosexuality is still a criminal offence.

As we virtually hop between continents, cultures and genders, you can expect to bawl at Oscar-winning flicks by Black filmmakers, be moved by the movies that sparked protests in their hometowns, applaud Bollywood's first lesbian romcom and howl at the cult 90s comedies that are best taken with a pinch of salt. Grab the popcorn.

Queer culture: the best LGBTQ+ films around the world

The 2018 Oscar winner for Best Foreign Language Film follows trans woman Marina (played by Daniella Vega, the Academy Awards' first transgender presenter) as she fights for her rights following the death of her boyfriend Orlando. The award win helped LGBTQ+ activists reignite Chile's discussions around trans rights, which led to the passing of a bill in September 2018 that lets trans citizens change their name and gender on official records.

Sarah Waters' historic novel Fingersmith is the go-to title for lovers of LGBTQ+ fiction. This film adaptation plucks the story from Victorian England and drops it in Japanese-occupied South Korea in the 30s, amping up the lusty, psychological-thriller vibes the process. Film locations include Japan's Mie Prefecture as well as Pyeongchang and Nagoya in South Korea.

This film kicks off with ulwaluko, the ritualistic, coming-of-age circumcision of a teenage boy in South Africa's Xhosa community. Yet at the emotional heart of The Wound (or "Inxeba" in Xhosa) is a closeted gay romance bewteen protagonist Xolani and Vija. When the film was released in 2017, members of the cast and crew received death threats and were forced into hiding, while screenings in the Eastern Cape were cancelled due to protests and vandalism.

We don't like to throw the word iconic about, but this is it. Seven years in the making, Paris is Burning launches viewers into Harlem's ball scene of the 80s, introducing us to "vogueing" and "shade" as well as the houses - many of them Black or Latinx - that would go on to influence the worlds of dance, fashion and, most recently, hit-series Pose. Like this? Watch Pariah (2011), a drama that probes into Brooklyn's sex-positive Black lesbian subculture.

One of Spain's most successful filmmakers, Pedro Almadóvar has a catalogue of movies peppered with gay characters and storylines. Making its mark on the awards circuit, his most recent flick, Pain and Glory, starring Antonio Banderas and Penélope Cruz, follows an ageing film director who reflects on his life in the face of chronic illness and creative block.

The life of Johnny, a young sheep farmer in Yorkshire, is transformed when he falls in love with Gheorghe, a dark-haired Romanian migrant worker who's helping out during lambing season. Think of it as England's answer to Brokeback Mountain. It's a tale that tugs between tough and tender, much like the rugged, romantic moors of West Yorkshire - filming took place in Silsden, Haworth and Otley. If you enjoyed this, venture farther north to rural Scotland with post-war lesbian drama Tell it to the Bees.

Moonlight needs little introduction. The first LGBTQ+ film to win Best Picture at the Academy Awards (yes after that mix-up with La La Land), it takes us through three life chapters of Chiron, a Black gay man, as he grows up in one of Miami's most impoverished neighbourhoods.

Céline Sciamma's simmering lesbian romance ranks among the best-reviewed movies in recent years. Set on a windswept island in the 18th century (filming took place in Brittany's Saint-Pierre-Quiberon), it charts the love affair between painter Marianne and her subject, the soon-to-be-married Héloïse. Like this? Keep your eye out for upcoming Ammonite, which revolves around a romantic relationship between English palaeontologist Mary Anning (Kate Winslet) and Charlotte Murchison (Saoirse Ronan) in 19th-century Lyme Regis.

The Adventures of Priscilla, Queen of the Desert (1994)

New South Wales and beyond, Australia

Homosexual acts were only deemed legal throughout Australia in 1994, the same year that Stephan Elliott's The Adventures of Priscilla, Queen of the Desert followed a lovably flamboyant trio made up of two drag queens and a trans woman as they kicked up dust across the outback.

Set against the vibrant hubbub of Nairobi, Rafiki (Swahili for '"friend") puts a positive spin on a romance between two young women, Kena and Ziki. It would become the first Kenyan film to be shown at Cannes, but screenings were initially banned in Kenya, where same-sex acts are considered a criminal offence.

To Wong Foo, Thanks for Everything! Julie Newmar (1995)

If The Adventures of Priscilla, Queen of the Desert had you howling, this cult classic about three New York drag queens and their misadventures on a cross-country road trip to LA will be right up your street. For a more sultry jaunt across the US, watch Cate Blanchett and Rooney Mara act out Patricia Highsmith's novel The Price of Salt in the 2016 film adaptation, Carol.

It would be remiss not to mention Mädchen in Uniform; released in 1931 it was among the first films to feature a radical lesbian romance (between a student and teacher, no less) and was subsequently banned by the Nazi regime. Yet we want to spotlight the more recent Jonathan for its alternative perspective on the coming-out narrative. Set in rural Germany - note the gorgeous scenes by the North Sea - it traces the relationship between emotionally volatile Jonathan and his dying father, who has kept his sexuality a secret for decades.

Tackling issues of loneliness, self-esteem and acceptance, this documentary introduces us to Saar, who's HIV positive and seeking a sense of belonging in the London Gay Men's Chorus. On a trip to visit his Jewish Orthodox family in Israel, he grapples with cultural stereotypes as well as his own religious beliefs. Got your attention? Watch the 2019 documentary Gay Chorus Deep South, in which the San Francisco Gay Men's Chorus tours the American Deep South in the wake of the 2016 election.

Consider this heady story of first love as the lesbian answer to Call Me By Your Name, albeit set in Eastern Europe rather than the rolling hills of Northern Italy. It's that kind of retro-filtered portrayal of a summer romance that doesn't require too much brain power to watch, but has you head over heels with its hazy, sun-saturated rendering of rural Lithuania.

All aboard for a week-long hedonistic gay cruise from Lisbon to the Canary Islands. This 2017 documentary centres on five men: a Palestinian from Belgium, a Dubai-based Indian man, a wheelchair-user from France, a Polish man from the UK and an Austrian living with HIV. On their quest for onboard romance, they dive into issues such as loneliness, body fascism and finding acceptance.

If your idea of drag is death drops on RuPaul's Drag Race, you should carve out a little time to watch Viva, an ode to Cuba's dazzling underground queer performance scene and the prejudices its community faces. Is it the most gripping movie ever? Probably not. Did it make us start lusting after a trip to Havana? Absolutely.

Immersing viewers in the struggles of an impoverished neighbourhood and its craggy, sun-bleached coast, Martyr revolves around down-and-out Hassane, who takes a fatal dive into the ocean, and how his tight-knit group of male friends and family cope with his death. It's haunting, heartfelt and frustratingly hopeless, and a moving image of modern-day Beirut.

For too long, lesbian narratives tended to end in tragedy. Enter Desert Hearts, Donna Deitch's seminal 80s film adaptation of the tale of a professor who travels to Reno for a quickie divorce and falls for a younger woman. Thirty years after its release, it became the first movie to headline the OutWest Film Fest.

A modern Japanese take on the traditional, tragic Oedipus Rex storyline, this arthouse film (reported to have inspired Stanley Kubrick's adaptation of A Clockwork Orange) spirits us to the underground gay scene of 60s Tokyo. The use of "roses" (or "bara" in Japanese) in the title is a play on words that has a similar connotation to "pansy" in English slang.

Since 2014, discrimination based on sexual orientation has been outlawed in Georgia, but social attitudes towards the LGBTQ+ community remain conservative; the city's first official Pride march, organised for June 2019, was cancelled because of threats of violence from the far right. It's against this backdrop that And Then We Danced, the story of a secret love affair between two male dancers, was released. It received a 15-minute standing ovation at the Cannes Film Festival; in Tbilisi, violent protests broke out during the screening.

Filmed using an iPhone 5S, this comedy-drama follows trans woman and sex worker Sin-Dee who, having just finished a 28-day prison sentence, travels around West Hollywood and Santa Monica Boulevard on Christmas Eve to confront her cheating boyfriend and pimp. Among the first major films to cast two Black trans actresses in leading roles, Tangerine offers a glimpse into LA's trans street culture that's rarely captured. If you're a fan of this try Mala Mala, a documentary exposing the struggles of trans sex workers in Puerto Rico.

This bittersweet romance (the title is ironic, FYI) spirits us from the urban thrum of Hong Kong to the roar of Iguazú Falls and Argentina's vibrant capital of Buenos Aires. Along the way, we follow boyfriends Leslie Cheung and Tony Leung who are travelling in one last-ditch attempt to revive a can't-live-without-you kind of love.

Several movies have sought to shed light on the life of India's queer community including Kapoor & Sons and, most recently, Shubh Mangal Zyada Saavdhan. Ek Ladki Ko Dekha Toh Aisa Laga (or "How I Felt When I Saw that Girl") was the first mainstream LGBTQ+ movie to be released since the decriminalisation of homosexual acts in India in 2018. It also marks the first time a Bollywood romcom has had a lesbian woman as its protagonist.