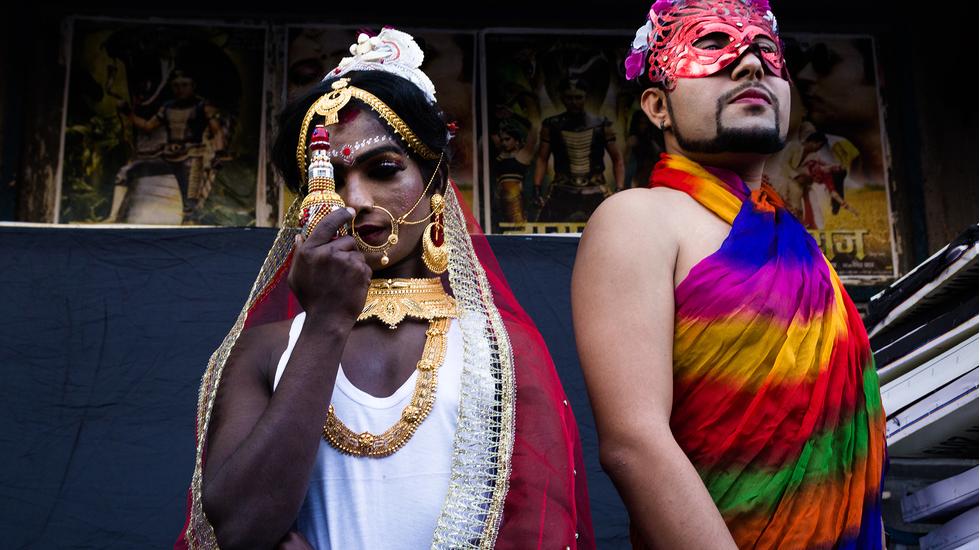 It is my body and my wish... be gone demons.

To To be a member of India's LGBTQ+ community is to be marginalised and persecuted. In the past, sexuality of any form has seldom been discussed openly here, meaning that non-traditional attitudes towards love and lust remain taboo. Only the bravest dare come out of the closet.

In a conservative society, homosexuality was viewed as against Indian culture, against nature and against science. Families of LGBTQ+ children were once advised to repress their desires through forms of counselling, medication and yoga. As adults, those in the community would be viewed as untouchables, often stripped of basic rights, bullied publicly and cast out by their own families - instead many take shelter at brothels. Gay rape victims struggle to report crimes for fear of being mobbed or lynched. Such emotional wounds are shared by many of India's LGBTQ+ community.

The wound is the place where the light enters you…

There has, however, been a turn in the tide of public attitude. In 2018, India's Supreme Court overturned the criminalisation of homosexuality, a colonial-era law first laid down in 1861. The ruling gave a refreshed sense of hope and pride among the LGBTQ+ community, a feeling that has bolstered the Kolkata Rainbow Pride Walk, which I joined last year.

The parade - originally the "The Friendship Walk", and India's first such public celebration - has been held since 1999. In a display of equality, tolerance, love and solidarity irrespective of gender, sexuality or religion, people don yellow T-shirts or colourful costumes and walk streets decorated with art and slogans reading "walk the rainbow" and "it is my body and my wish... be gone demons."

It's a day not just for LGBTQ+ people, but for all those who face discrimination. People march for children's rights, women's rights, Dalit rights, the rights of those with disabilities. As the parade disperses into a festival, exhibitions, film screenings, discussions and hangouts create the space for discussions that have been repressed for too long.

To hear peoples' stories is to understand their struggles and vulnerabilities, and to realise that our desires may be different, but they are all equally valid and parallel. There is no "normal" life in which everyone can be happy. In this photographic series, as people celebrate and express their identities, I imagine a world in which everyone's lived reality reflects their feelings within.