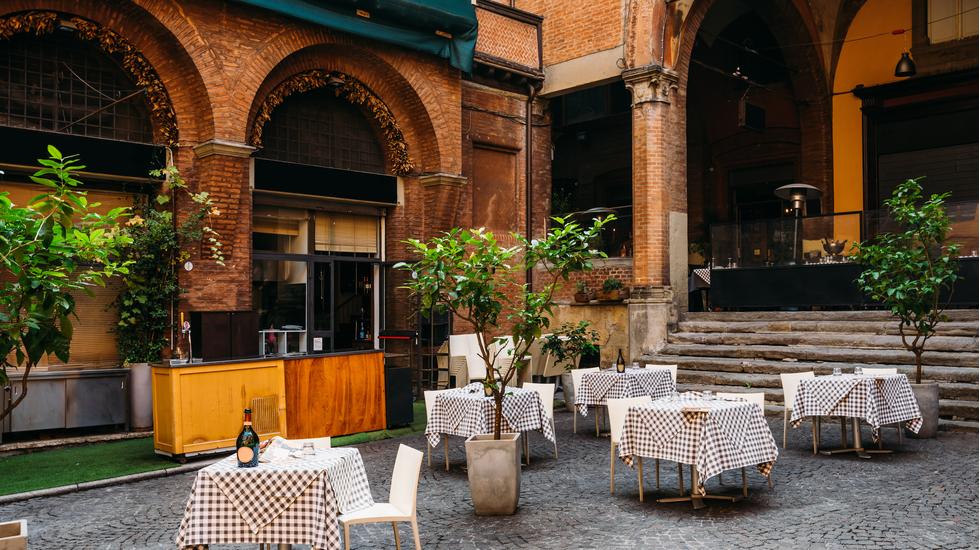 Home Home to Europe's oldest university, bright-eyed Bologna has many nicknames: "La Dotta" (the learned one), "La Rossa" (a moniker with a double meaning, alluding to the city's left-leaning political persuasion, as well as the terracotta tiled roofs that dot its skyline) and, finally, "La Grassa" (the fat one). It's this last one we'll be paying most attention to with this round-up of Bologna's best eateries, spanning a delicious market-side hangout to an underground jazz bar, and the top spot for this foodie city's famed spaghetti al ragù.

You'd walk straight past this little establishment if you didn't know where to look. Tucked away to the side of Mercato delle Erbe, a central covered market selling fresh local produce, it attracts a crowd of familiar faces day in, day out. Roll up to its kitchen-facing bar or take a pew at one of a handful of small tables and you’ll be brought over a chalkboard with the day’s menu, which usually has no more than five simple options, including the catch of the day.

A refined, romantic, live-jazz spot, this cave-like underground bar and restaurant offers a well-curated three-course menu alongside a staggering wine list featuring more than 500 Italian and international labels. Reserve ahead (being one of the most popular places in the city for live music, it gets booked up quickly) and, for a £17 cover charge, you’ll be serenaded all evening. Be sure to leave room for the tiramisu.

Bang in the middle of Bologna's student district, Berberè is a pizzeria pioneering wholewheat sourdough pizzas and catering to the ever-expanding number of health-conscious locals. Don’t think for a second that this deviation from the classic Italian pizza recipe compromises on quality, though – all ingredients are seasonal, organic and super-fresh, and many can be bought from the restaurant’s shop, next door. Snaking queues are a common sight at weekends – order takeaway and eat al fresco in nearby Piazza Verdi if you don’t fancy waiting for a table.

Located within a 16th-century chapel with frescoes and elaborate stuccoes emblazoned across every wall, Le Stanze is a sophisticated bar and restaurant that stands out from the crowd. Cocktails are meticulously crafted at the bar in an elaborate performance of whirling limbs and tinkling ice cubes, while first-class fare is whipped up in the kitchen below, before being whisked over to you in one of four palatial rooms.

Known locally as the best place for “spaghetti al ragù” (ask for spaghetti bolognese and eyes will roll), Osteria dell’Orsa epitomises no-fuss dining at its finest. Sit cheek-by-jowl with nattering students and businessmen and roll up your sleeves for some classic Bolognese fare – the daily changing menu here is basic, but brilliantly executed. If extravagance and impeccable service are what you’re after, you might have come to the wrong place. Here, you’re more likely to be briskly ushered in and waved over to take a seat as your red-chequered table is wiped down before you. But if you’re happy to drink wine out of a tumbler (at a very decent price) and forfeit the frills in the name of Italian authenticity, then this is your spot.

Centrally located on Bologna’s Strada Maggiore, Zoo is an ever-transforming café and exhibition space that hosts a variety of workshops and events and that has a delicious all-day menu. Particularly popular among students, who swarm the café’s large wooden tables in search of a convivial study-and-refuel spot, you’ll want to arrive early to bag a table at lunch.

This tiny little bar on a cobbled side street that fringes the city’s main student district is popular with the select few locals who know about it. There’s only a handful of tables, so it fills up quickly – particularly at aperitivo hour, when visitors are treated to some of the best Italian snack food the city has to offer. Think melt-in-your-mouth prosciutto, squidgy focaccia and olive-drizzled bruschetta. Looking for some fresh, organic supplies to take back to base? The bar’s adjacent fruit and veg shop is bursting with goodies from local producers.