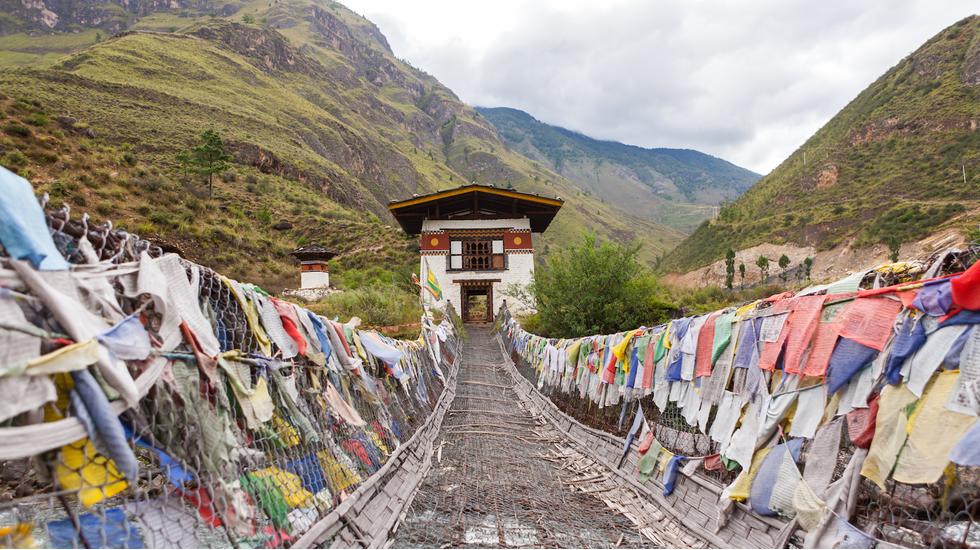 It It was the last nation to turn on the TV in 1999, it is the only country with a national park devoted to preserving the natural habitat of the yeti and its government shuns international franchises such as Starbucks and McDonalds. Bhutan preserves an air of magic and mystery, despite being sandwiched between rapidly developing powerhouses India and China. Even in the capital Thimphu, national dress - kira for women and gho for men - prevails over western clothes.

The tiny Buddhist kingdom is most famous for rejecting GDP and favouring the idea of Gross National Happiness (GNH) a notion that was introduced by the country's former monarch, the Fourth King Jigme Singye Wangchuck in 1972 and has been fawned over by international media since.

My first impressions of the country certainly suggest a simpler life. There are no garish backlit yellow signs or soulless white corridors at Paro airport, just the sun setting over a traditional pagoda-style arrivals hall and surrounding pine-clad mountains. The air is clean and there is a strong sense of space; having spent the previous month travelling between Indian smog and overpopulated Chinese cities, I feel like a weight has been lifted. Bhutan didn't become the "happiest nation in the world" overnight, and this is perhaps in itself a misleading statement - how can you reduce something so subjective by quantifying it? When I ask Bhutanese newspaper editor Needrup Zangpo about the label, he says: "We are, undoubtedly, a happy country. I feel this overwhelmingly whenever I come back home from my visits to other countries. But to believe that we are the happiest place on earth is dangerously naïve. We are a nation like any other nation in the world grappling with a number of problems.

Leaders have made citizens' wellbeing a top priority. Each year the government undertakes a happiness survey, taking into account lifestyle factors that affect wellbeing such as working and sleeping hours, as well as earnings and education. This year's figures, released in November, found that nine per cent of people are "unhappy", while the remaining 91 per cent of people in the Himalayan kingdom are "happy", including over eight per cent who are "deeply happy".

My guide KP also believes national happiness is easier to encourage because Bhutan's population is a mere 754,000. For a small nation, Bhutan has social models to be proud of: the profits from tourism pay directly for free healthcare and education up to university level for all, which perhaps heightens the sense of equality, in contrast to neighbouring India and Nepal's caste systems. It is still a developing country, but Bhutan's figure of 12 percent living below the (relative) poverty line is, interestingly, much lower than a third in the UK.

Statistics are one thing, but I want to ask more locals how they really feel. In Punakha, a town in a beautiful rural valley surrounded by farms and rice paddies, KP takes me to a bar called Hang Out - with pink peeling walls and a killer atmosphere, where punters take it in turns to choose songs to dance to on stage. I make friends with a 20-year-old woman named Sonam, and ask her if she thinks Bhutan is a particularly happy place to live. "I love living in Bhutan," she says. "Our King is like our God."

An 18-year-old student makes the same association between happiness and the monarchy: "We have no problems here, and we have a great King." As a Westerner, it's easy to be cynical about the way the country's royal family is idealised. Pictures of the King are everywhere: up on lampposts, all over badges and postcards in souvenir shops and presiding over tables in restaurants. But the more people I speak to the more genuine the adoration seems. It could well be sound evidence of an awareness among the Bhutanese that their monarch - who in 2008 quietly installed democracy of his own accord, having witnessed unrest in other countries such as Himalayan neighbour Nepal - genuinely has their wellbeing in mind.

Modernising at its own pace, the King and government have closely guarded Bhutanese culture, while Buddhism also remains strong. Young people dressed in Western clothes solidify friendships, as their parents did, chewing betel nuts; tarmac roads are in the process of being built over dirt tracks across the country, yet are still lined with red, white, yellow, green and blue prayer flags; apps tell people the best days to hang prayer flags; red-robed monks walk around texting on smartphones.

We have no problems here, and we have a great King

Buddhism has, throughout its 2,500-year history, placed great importance on happiness. A large part of that belief is based on the idea of trying not to desire things that you don't have - a concept many Bhutanese people are raised with. So perhaps it's a no-brainer that a Buddhist kingdom is happier than other parts of the world.

The story Sonam (the woman who I met at Hang Out) told me sticks in my mind, particularly because of her resilience. At 20, she has already lost her parents, has a five-year-old son, and has been married and divorced (divorce rates in Bhutan are increasing). She is nonetheless tremendously outgoing and, despite it all, is still smiling and content with what she has. It seems indicative of an acceptance that Bhutan isn't exactly the utopia the label of "happiest place in the world" would suggest - that it's just like any other country with a raft of positives and negatives - but that a focus on being happy with what you have, and having a government that places wellbeing first, give its people a significant advantage.