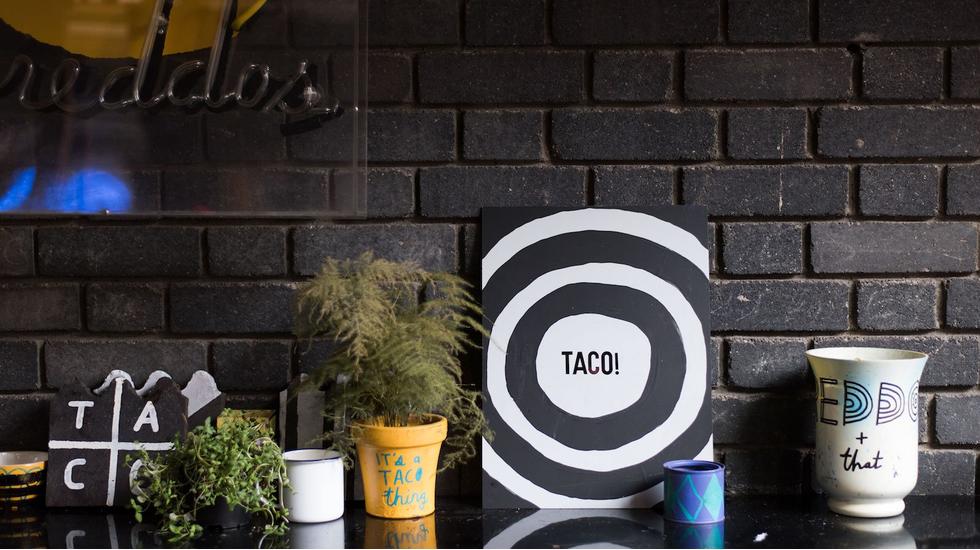 Not Not long ago, proper tacos were almost impossible to come by in London. Mexican food has often been reduced to a caricature of Tex-Mex - messy platters of sour cream, sizzling steak strips and unidentifiable grated cheese. The light, zesty flavours and rainbow-palette that defines true Mexican cooking has been lost on us. But ever so slowly, that's beginning to change. And as any lover of this joyous cuisine will know, good Mexican food begins with good tacos.

Best friends Nud Dudhia and Chris Whitney fell in love with Mexican cooking after travelling around the country, grazing at roadside food trucks and feasting on traditional recipes cooked by fiercely proud locals. They spent the next decade returning to Mexico to learn the ins and outs of the cuisine, the core flavours of which are rooted in indigenous ingredients like chilli, limes, buttery avocados, corn and bitter chocolate. They found tacos at every turn - soft corn tortillas heaped with marinated pulled meats, fried fish and citrus.

Back in London, they set up their first Breddos stand in 2011 in a Hackney car park, to the sweet relief of hungry taco fanatics across the capital. Since then, they have become the star stall at Dinerama street food market in Shoreditch, hosted endless pop-ups and released a critically acclaimed cookbook. Last week they opened the doors of Breddos Taqueria, their first permanent space in Clerkenwell.

The menu will mirror their street food offerings, with their signature combination of classic Mexican recipes, global twists and British ingredients. Tacos include baja fish with cabbage and lime mayo, fried chicken with fermented habanero, catch of the day with salsa verde and pig's head pibil with sour orange. All come with a range of fresh salsas, muddled up each day. Their tortillas will be made from corn ground in-house using a machine imported from Mexico, and the drinks list will include local beers, Mexican cola and craft cocktails drenched in mescal. There will also be inventive sharing dishes like chicharrón (braised pig's skin), beef tartare with black pudding mole, Mexican 'tortilla pizzas' and mutton barbacoa. Mother may we.

SUITCASE caught up with Nud and Chris to hear all about their new space, their plans for the future, and to generally shower them in love for making perfect tacos a part of our new daily routine.

Tell us how this all began. What gave you the idea to start selling tacos?

I [Nud] travelled through Mexico and just fell in love with the cuisine. Years later, when I met Chris at uni and we started to think about a food business together, it was a no brainer - we had to open a taco shack!

You describe your tacos as 'non-traditional'. How are they so?

We're not Mexican and so we don't have access to 'Grandma's traditional recipes'! We have taken what we have learnt from travelling around Mexico and with that, used our own culinary heritage and ingredients to create something different. This means we aren't being limited to traditional Mexican recipes and it allows us to use ingredients that we find interesting such as sichuan pepper or soy.

What traditional Mexican elements are you sure to keep in your food?

All of our dishes do use traditional ingredients and spices from Mexico and most are based around a traditional dish. We follow traditional processes such as making marinades and salsas or charring the ingredients over coals.

Do you think Mexican food has been misrepresented in England?

For a very long time it has been but it seems that there's now a new wave of interesting and 'respectful' operators that are bringing the vast and complex cuisine to the UK.

What was your first ever taco experience?

A fish taco a beach in Puerto Escondido - it was revelatory!

Tell us about the street food in Mexico. What kind of thing can you expect to find at the roadside there?

Mexicans, rich or poor, will eat one street side meal a day. The culture of street food is so ingrained in Mexico that it really is a part of daily life over there. Every region has a different style of cuisine and way of cooking. For example in Yucatan, the food is made using marinades called recados and the use of Seville oranges and habaneros is widespread. In the North, they cook over wood and use flour instead of corn for their tortillas. One thing is for sure, wherever you go you'll find taqueros (taco vendors) on the streets selling meat that is cooked or stewed on a corn tortilla with an abundance of salsas to choose from depending on whether you like it spicy, zingy or just plain meaty. My favourite is the Al Pastor which you find in DF Mexico - spit roast pork with roasted pineapple and salsa verde.

What do people tend to drink with their tacos in Mexico?

Could you sum up the flavours of Mexican food?

Sweet, spicy, salty, sour, umami - all in one mouthful!

I think visitors are opening up a lot more to eating street food when in Mexico because of the quality of the traders out there using great meat and seasonal vegetables and introducing the masses to new styles of food.

In what way do you think British produce lends itself to this kind of cuisine?

We have some of the best beef and pork in the world. Our meat at Breddos Taqueria comes from Warrens in Cornwall where the cows are looked after very very well, with great diets.

Why is the music at your restaurant such an important feature?

Music has always been a part of Breddos from the back in the days when we were in a shack in a car park. It's something that keeps the vibe going and the customers happy. It's also a big deal in Mexico where you can't escape the sounds of the country.

What kind of experience do you want people to have when they eat at Breddos?

Fun, relaxed and totally informal. We want Breddos to be a place where people are comfortable coming in for a quick breakfast taco and a coffee, a boozy lunchtime meeting or a cozy evening date.

What's next for you guys?

Right now, we want to focus on making the taqueria the best it can be and eventually open another taqueria! But before that, more travelling to Mexico and maybe another book.

Discover More
Quilombero: The London Pop Up You Need to Know About
Read now