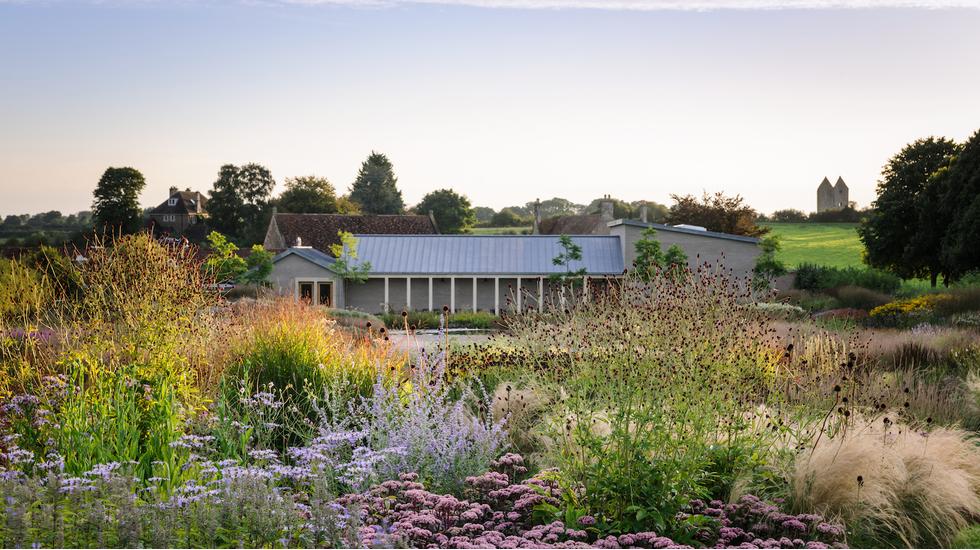 Orchards Orchards unfurl across meadows threaded by the River Brue. Lanes flanked by hedgerows overflowing with cow parsley give way to narrow streets lined with Hamstone cottages and medieval churches. From up on Lusty Hill, a 16th-century dovecote broods over the seemingly sleepy West Country town of Bruton.

As locations go, it's an unassuming spot for a cosmopolitan enclave of bon vivants. Tucked between Yeovil and Frome, with a population that hovers around 3,000 and a social life that hugs a single street, this South Somerset bolthole proves that good things come in small packages. Since the internationally renowned Hauser & Wirth gallery opened here in 2014, Bruton has enjoyed a flourish of popularity. Today, it punches far above its featherweight when it comes to world-class contemporary art, design-driven boutique hotels, sustainable farm-to-table restaurants and idiosyncratic shops that have earned it cult status among those in the know.

Correspondingly, a who's who of city-dwelling celebs and media types have decamped to the sticks, bringing with them a sprinkle of stardust that has given this medieval market town a moniker of "Notting Hill-on-Brue". Yes, Bruton has since been ranked among the "coolest" and "most fashionable" places to live in the UK, but snobbishness is kept at bay by a collective, unadulterated pursuit of the good life. This is a place that is as communal as it is bucolic, albeit in a thoroughly modern, cultured guise.

For years, poor transport connections meant that Bruton avoided the radar of Londoners seeking a break from the Big Smoke; now the number of train services running between here and Paddington Station clock in around four each day (and take roughly two and a half hours), making a car-free micro-break more do-able, but keeping it far enough off the beaten path that it's not overrun with visitors.

We've consulted locals, perused galleries, trodden country trails and quaffed a good amount of Burrow Hill cider in a bid to find the best places to stay and play in Bruton.

At The Chapel is where Bruton’s beau monde worships the holy trinity of good design, food and drink. This 17th-century, Grade II-listed church now houses a hotel, restaurant, wine store and bakery. Find sanctuary in one of its eight rooms, where white-washed walls are canvases for mid-century furniture and original details (we love Room Two for its magnificent stained-glass lancet window) and bathrooms dotted with REN products are clad in marble. A buttery croissant is spirited from the on-site bakery to your door each morning. Divine.

A few miles out of town, this 17th-century manor (formerly Hadspen House) was the home of the Hobhouse family for two centuries. Bought by billionaire Koos Bekker and his ex-Elle Decoration Editor wife Karen Roos, owners of the upmarket South African farm stay Babylonstoren, in 2013, it was six years before The Newt became the beacon of the good life that it is today. The nectar-hued Palladian hotel artfully combines old and new across its individually designed rooms (The Granary is our favourite). It’s nestled in a 300-acre estate, surrounded by landscaped gardens, a baroque-style maze of 460 apple trees, a working farm, mushroom house, gardening museum, treetop walk, wild-swimming ponds, thatched ice cream parlour, farm shop, “cyder” press, café, restaurant and world-class spa. This is a countryside retreat, and then some. Not staying here? You can still visit the grounds.

Rubbing shoulders with Hauser & Wirth gallery, this 18th-century farmhouse turned six-bedroom hotel has a charm that permeates its many layers of history. Against a characterful canvas of peeling wallpaper and weathered floorboards, original artwork includes a cubist-style mural by Guillermo Kuitca and a video installation by Pipilotti Rist. Individually designed rooms are as characterful as the shared kitchen is communal – it’s fully stocked, in case you get peckish.

Like Bruton itself, this 12-bedroom boutique hotel is understatedly fashionable. Number One inhabits a former Georgian townhouse, medieval forge and row of cottages. Set around a quaint courtyard it’s a must-visit for city types looking for a break from the urbane, thanks to its focus on Somerset’s crafting heritage and country culture. There’s a playfulness behind its pared-back aesthetic, which pairs a demure palette and period features – fireplaces, gilt mirrors, exposed beams, antique fittings – with bold prints. Guest goodies include a welcome package of local cheese and organic toiletries from Great Elm Physik Garden. Breakfast taken in Osip restaurant is especially good. Freshly baked brioche? We’re sold.

If you enjoy flitting through the Scandi-style homewares of Caro on Bruton’s High Street, head to owner Natalie Jones’ B&B a short walk away. Danish throws and a wire-frame bedside table are illuminated by bare Edison bulbs, making this 18th-century cottage a petite retreat for design-conscious weekenders. Breakfast is taken in At The Chapel.

Bruton revolves around its high street. Veer off a few streets, however, and you’ll stumble upon The Wing. Owned by the couple behind Phillips & Skinner antiques shop, this sleek yet cosy wooden cabin isn’t the most bougie when it comes to design, but no matter – you’ll spend most of your time on your private terrace gazing out at nothing but rolling hills. Breakfast comes in the form of a voucher to be redeemed At The Chapel. Heavenly.

Bruton is twee, but if you want to immerse yourself in Somerset’s undulating countryside, we recommend climbing in among the knotted branches of the nearby Stourhead Estate. Here, the wood-clad Bower Treehouse is a place of quiet extravagance rooted (quite literally) in nature. There’s an outdoor bathtub in the treetops and, at ground level, a fire pit and barbecue ideal for al fresco dinners. Want to branch out? We love the Scandi-style Cheriton Treehouse – it’s a 15-minute drive from Bruton and is surrounded by wildlife and views over the brooding Blackmore Vale.