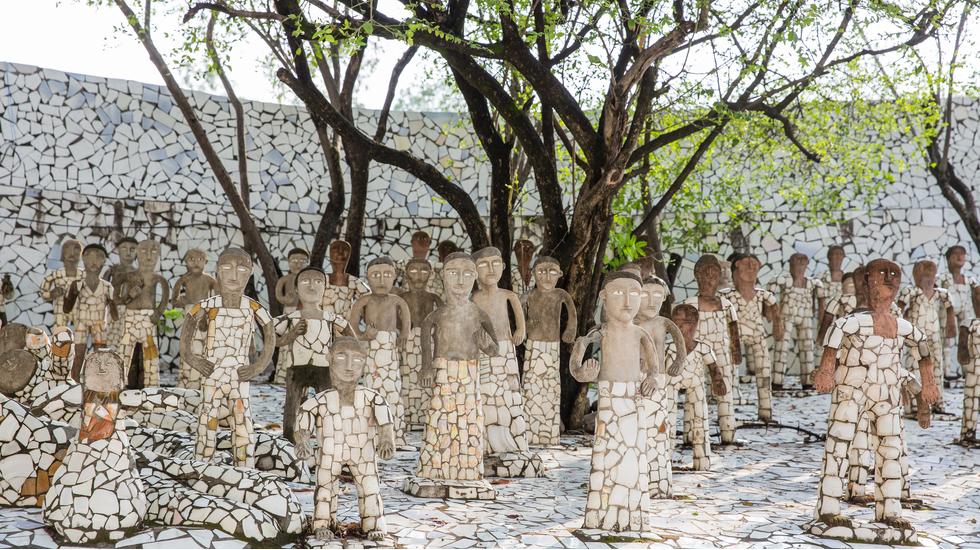 Driving Driving into Chandigarh from the nearby Himalayan foothills, our bus passes through sprawling flatlands and rice fields zig-zagged with paths. As we draw closer to the city, the meandering streets of the rest of the country are slowly replaced by broad boulevards that run in straight lines, each meeting at a perfectly perpendicular angle with its neighbouring street. The city's grid-like road structure more closely resembles American blocks than the snaking alleyways of the towns that surround it.

Chandigarh was India's first planned city. Designed by the Swiss-French architect Le Corbusier, it was commissioned in 1950 by India's first post-Independence Prime Minister, Jawaharlal Nehru. Punjab and Haryana province had lost their previous capital, Lahore, after it was partitioned into Pakistan. Chandigarh was to be the forward thinking replacement: a "dream city" symbolic of a new, independent India. It is seen today as one of the greatest architectural experiments of the last century, and one of the few planned cities that "actually works".

The recent resurgence of interest in mid-century design has seen a revived appreciation for brutalist architecture, a movement characterised by its use of concrete, raw, clean lines and cuboid structures. However, as many fans of the style look to European buildings as examples, such as the Barbican Centre, Trellick Tower and Sheffield's Park Hill complex, it is Chandigarh that showcases one of the most extensive examples of brutalist architecture. Importantly, the city also embodies brutalism's aim to link architecture with social issues and public well-being; to the belief that urban planning can create happier and more cohesive social structures.

Our taxi driver speeds around the organised, ordered roads of the city. He explains to us that it is divided into sectors: Sector 17 is the city's retail centre, while "going to Sector 25" has become a euphemism for dying, as the crematorium is located there. Compared to road maps of Delhi or other large Indian cities, Chandigarh's block design is meticulously planned. Each sector is the same size and the roads that link them flow perfectly around the uniform buildings. It is a green city, with large swathes of grass incorporated within the grid layout: "the whole city is a park", Le Corbusier writes. The central plaza is pedestrianised, the buildings around the main square all designed to the same dimensions.

Le Corbusier took these strict dimensions, which guide the layout of Chandigarh, directly from the proportions of the human body. Based on the measurements of a six-foot tall man, he deduced the "golden ratio" - approximately 1:61 - which was the total height of the figure with his arm outstretched in relation to the height of the navel. This ratio guides the layout of the plaza, and the dimensions of the buildings in relation to it. Le Corbusier believed it would put the human body at the centre of design, creating a more symbiotic relationship between building and body, as the former mirrored the dimensions of the latter. It is Chandigarh's Capitol Complex where Corbusier's vision of the golden ratio reaches its desired perfection. The complex is a government compound located in Sector 1 of the city; it is the clearest manifestation of Corbusier's design, the buildings here most emblematic of his modernist signature. The layout of the buildings, as well as the positioning of the lakes and statues in between them, all echo the ratio dimensions exactly.

We visit the complex at sunset. As the sun goes down, an orange light seeps over the city and bounces off the raw concrete edges of the government buildings. We walk past the High Court, a striking building comprised of cuboid concrete grids. Offering a contrast to the grey structure, three central pillars are painted red, yellow and green. From here you can see the Palace Assembly, where eight columns support a large sweeping flick of concrete that comes up from the building's roof. The open front of the Assembly frames a view of the nearby Himalayas. Described as the "modernist acropolis: Corbusier transforms concrete - a symbol of the everyday - into regal, arresting palace-like structures. It is a masterclass in brutalism's belief in the transformative power of tough, raw materials and structures to take on subtle, unexpected beauty.

Chandigarh is an unexpected diamond; an exciting counterpoint to India's other major cities. Intriguing and beautiful, it brings you as close as you can get to one of the last century's greatest architects.