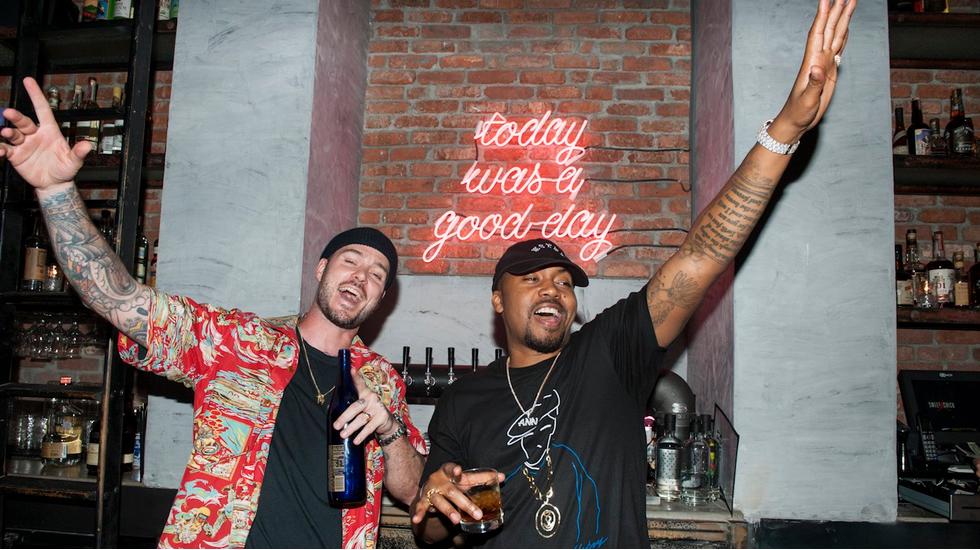 Raised Raised in New York as a child of Irish immigrants, the Sweet Chick founder John Seymour grew up on stews and roasts. After-school hangs with his father, a bartender, meant homework time was fuelled by homemade burgers consumed barside.

Today, John Seymour's food staples (and palette) have realigned. At Sweet Chick, his New York-based fried-chicken joint, the hallmark dish is fried chicken and waffles drenched in maple syrup. A plate linked to the South, its origins can be traced to the African-American jazz clubs of New York's Harlem.

That tidbit, and many other foodie facts, was gathered while taste-testing Sweet Chick's lengthy menu ahead of it's London launch. Read on for more chicken-related content (don't even pretend that's not a regular in your Google search).

Tell us about Sweet Chick; how did it come about and where did the name come from?
After learning the New York origin story of Chicken and Waffles, I was inspired to open a neighbourhood spot that highlights and elevates the dish, while building a full-service restaurant around it. As we were testing a number of brines, we found that adding sweet tea to the brine process gave our recipe a perfect taste balance. While thinking about sweet tea and the sweetness of maple syrup someone said “Sweet Chick” and it just stuck.
Rapper Nas was an early backer of Sweet Chick, tell us about your partnership…
Nas is the soundtrack of NYC and legend worldwide, so for me it was unreal that he wanted to get involved. It really convinced me that we had built something special at Sweet Chick. His support and love for the brand inspires us all to keep striving for greatness in every aspect. But it’s more than a partnership, its a community that we have around the restaurant from our staff, friends and guests; and Nas is part of that, which is really cool.
What are your childhood food memories?
Growing up in NY you are introduced to so many flavour profiles at a young age. I mostly remember eating stews and roasts at home as my parents are Irish immigrants. My father was a bartender and I spent a lot of time after school hanging with him doing homework on the bar and eating his homemade burgers. Those are probably the staple meals of my childhood.

The restaurant’s hallmark dish, fried chicken and waffles, is linked to the South but also to African-American jazz clubs of New York’s Harlem. Can you tell us a bit more about the origins of this dish…
In the 20s at M Wells in Harlem, a jazz musician finished his set late at night and went into the kitchen. The musician wasn’t sure if he wanted breakfast or dinner so the chef said:“I have fried chicken left over and I can make a waffle.” And so, chicken and waffles were born.

Do you view chicken and waffles primarily as a breakfast dish? What are some other solid breakfast orders on the Sweet Chick’s menu?
It is truly a dish that can be eaten anytime. We have a bunch of breakfast/ brunch options, from ricotta pancakes to veggie hash with fried eggs and we are always testing new dishes.
Best food spots in New York…
It really depends on what you’re craving at the time. In NY you can find good food in almost every neighbourhood – from hole-in-the-wall spots to fine dining. I typically eat in Downtown, Manhattan and Brooklyn.
And LA…
Stop at the first taco truck you see.

You’ve New York locations in Williamsburg, Long Island, Queens and the Lower East Side. How do you choose your locations and where might you open up next in NYC?
I have always chosen locations with a gut instinct, and being from NY helps a lot when you are familiar with the place. We don’t currently have plans to open any more spots in NYC, but never say never.
Five of the best places to order fried chicken in the US…
Wow, thats hard. I’m still testing. Check back in 5–10 years; by then I will have eaten at every fried chicken place in America.

Other food cities worth visiting…
In the US: New Orleans, Nashville, Austin and San Francisco.
Where are your favourite places to eat in London?
I haven’t had enough time and will be trying a lot more places in the coming months but for now: Blacklock, Gloria, Kricket, Smokestak and my Aunt Madeline’s house for an amazing Sunday Roast.
What would be your last meal?
Honestly, if I die walking down a NY street with a slice of pizza in my hand I will probably be content with life I’ve lived.
What are you reading at the moment?
Shoe Dog by Phil Knight.
What podcasts and TV shows are downloaded for your next flight?
The Joe Rogan Experience. I’m also rewatching Peaky Blinders on my way to London.
What would you do to improve airplane food?
Reheated food never really works so I would suggest a raw food menu.
And finally, what’s in your SUITCASE?
New white Nike Air Force 1’s, a few go-to outfits and lots of room so I can fill it with shopping.