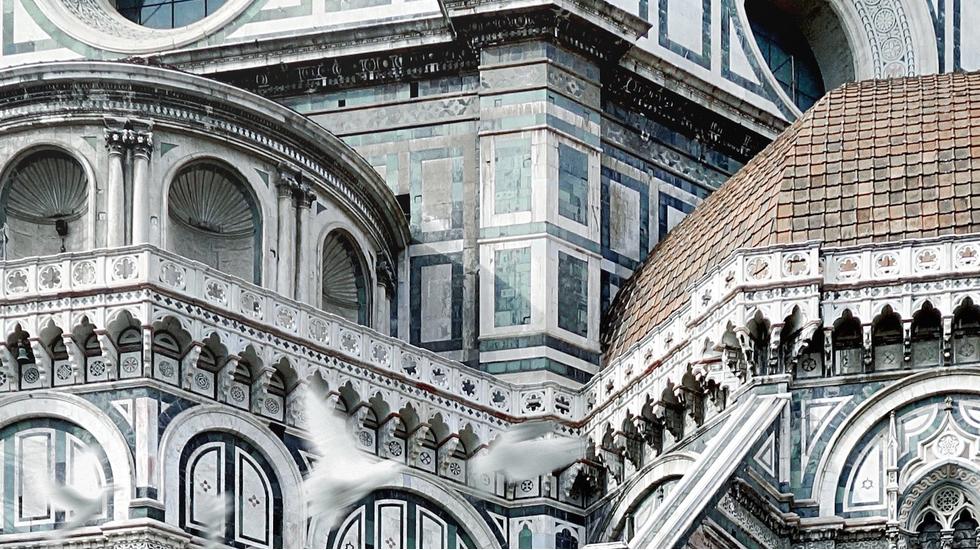 Birthplace Birthplace of the Renaissance, Florence was once the epicentre of the intense growth, innovation, artistic abundance and scientific discovery that swept across Europe in the mid-14th century. Inspired by a renewed interest in ancient Greek and Roman cultures, medieval values were eschewed in favour of new philosophies and modes of living that saw the beginnings of humanistic thought and an immense cultural shift.

The ideals of the Renaissance seeped into every part of ; it was a confluence of art, philosophy, science and literature that culminated in some of history's most important works of art and scientific discoveries.

More than a third of the world's most valuable art pieces reside within the remnants of the city walls; salient works include Michelangelo's David, Caravaggio's Medusa and Botticelli's Birth of Venus. Renaissance notions of order, beauty and rationality are demonstrated in the city's architecture; perfectly symmetrical domes, courtyards, arcades and fountains. A short walk through the city's historic centre will take you past countless museums and churches including the Uffizi Gallery (home to the world's largest collection of Renaissance art), Galleria dell'Accademia (for Michelangelo's David) and Il Duomo di Firenze.

Climb to a lookout point and you'll recognise the archetypal image of Florence: terracotta rooftops, rolling Tuscan hills, the prominent outline of the Duomo and the flowing Arno river that divides the city. A series of bridges connect the historic city centre to the south bank, including the iconic Ponte Vecchio. Marked by the overhanging shops that line its edges, locals say the bridge escaped damage in World War II because Hitler thought it too beautiful to destroy.

The Oltrarno District on the south side of the river, is slightly more removed from the hoards of tourists that descend year-round. Once overlooked, it has seen a revival in recent years. Residential dwellings are interspersed with trattorias, wine bars, artisanal boutiques and antique shops, along with hip cafés and bars set in restored medieval buildings.

Although the tourist traps are inevitable, our guide to Florence aims to entice you away from the obvious and towards the alternatives that the modern day city provides.

Occupying the first floor of a 16th-century palazzo, Ad Astra is one of the city’s greatest hidden treasures. The hotel is nestled on a quiet street lined with vespas, and the building – once a luxurious hideout for aristocrats – belongs to one of Florence’s most noble families, whose members are immortalised in the oil paintings lining the stairs. Ad Astra’s main living space is about as chic as it gets. With a soundtrack of jazz, there’s a frescoed ceiling, bookshelves, twinkling glass chandeliers, a tiled fireplace and plush velvet sofas. Each room is unique, with sumptuous textiles and colourful antique furniture – think standalone roll-top baths surrounded by walls covered with gilt-framed artworks. A patio wraps round the edges, opening out onto the largest private garden in Europe, flecked with roses and graceful statues. Leaving the hotel would be impossible if it weren’t for the surrounding area of Oltrarno, a bohemian district brimming with artists’ studios, boutique shops and independent cafés. Rooms from £220 per night.

Centrally located in the city’s Oltrarno district, it’s barely recognisable as a hostel. Set in an old school hall, Tasso Hostel’s common area and bar has been transformed with industrial-style furnishing and a stage for live music. Events are held each weekend; expect parties, live music, open-mic nights and poetry readings.

Offering an idyllic panorama of the city skyline from its rooftop garden bar, Palazzo Guadagni is a boutique hotel with a historical feel. Set in a 16th-century palace, it features antique furniture, frescoed ceilings and grand fireplaces in some of the rooms.

A bed and breakfast set in an historical palace, SoprArno Suites was created by an architect, a carpenter, a designer-calligrapher and a lawyer “with a passion for vintage furniture”. Artwork is carefully selected for each space, and each room is uniquely furnished; antiques from Tuscany and around the world are paired with original pieces such as a fire hydrant-turned-lamp.

Set in an ancient mill that dates back to the 13th century, La Martellina is surrounded by nature. This bed and breakfast is 5km out of Florence on the Arno river, but well-connected by bus routes and a bike path along the river. Rooms are decorated with antique furniture and wide wooden shutters open on to a picturesque view of the surrounding valley.

The top choice on our list for those in search of somewhere with a contemporary vibe. While the Continentale hotel is no less charming than other entries on our list, it’s sleek minimalism debunks classic Florentine Room with a View-style pensions. Inside, walls are dotted with black-and-white fashion and classic European films run on a loop on a giant plasma screen in the foyer. During your stay, don’t pass up the opportunity to zen out at the white iris beauty spa, which uses a range of products developed in Parma.

Opulent to the extreme, roses and spectacular frescoes proliferate the premises of Villa Cora at every turn. Built by Baron Oppenheim for his wife in the 1870s, the hotel is a love letter in art and architecture. Ask for a room on the first floor (the piano nobile), all of which are protected by the Italian government as historically important. If the beauty of your room becomes to much, rest up by the massive heated outdoor pool – the only one in Florence – and order a martini from the outdoor cabana bar.

Having undergone a wholesale renovation over the course of five years, this historic hotel reopened in spring 2021, with a new spa to follow in the autumn. Breakfast is sensational, as is the leafy pavement-side aperitivo spot run by renowned Florentine restaurateur Fabio Picchi. The spa will be the largest in central Florence and is being built on the site of the former Capitoline thermal baths of the Roman Florentia.

An easy stroll from the central train station, this place makes for a superb pit-stop at any time of the day. Future-looking and vibrant, it showcases an ongoing stream of local artist collaborations and community projects, with interesting dining options that offer the food you actually want to eat when on holiday in Italy (think leisurely al fresco breakfasts and goodies from artisanal producers). The interior design is sleek, with views of Piazza Santa Maria Novella.

Old-school opulence triumphs over minimalism at this 15th-century palazzo, but it’s all the more fabulous for it. The location, in the heart of the old city, couldn’t be better, with the Uffizi, Ponte Vecchio and iconic Piazza della Signoria just minutes away. Ground-floor Restaurant La Chiostrina, whose floor-to-ceiling windows overlook a light-flooded internal courtyard, tempts with a menu of expertly prepared and exquisitely presented Florentine specialities.

Positioned somewhere between a high-end hostel and co-living space, The Student Hotel’s main drawcard is its rooftop pool, offering bird’s-eye views across Florence. And, while it’s housed in an imposing 19th-century palazzo, it is one of the few relatively affordable hotels in the city centre. Look out for the giant graffiti art installations.