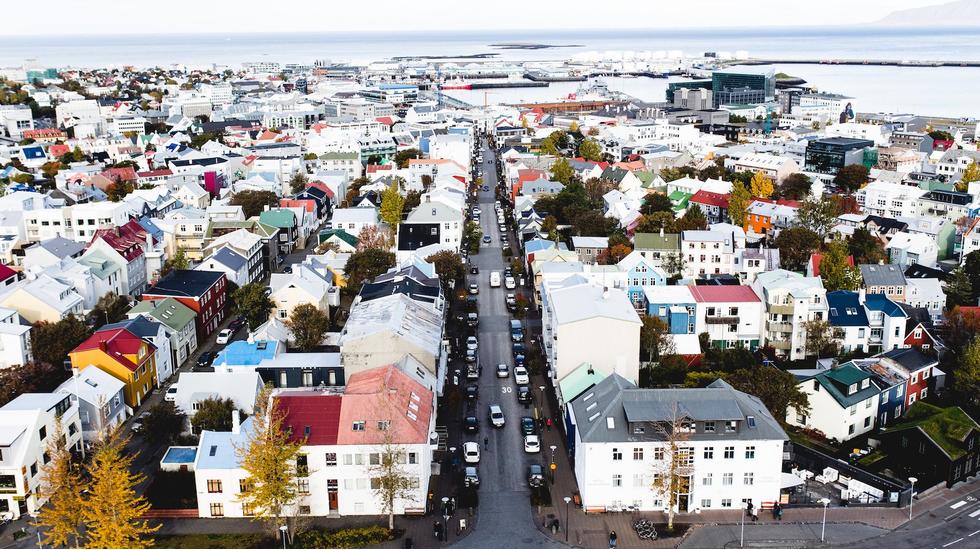 ReykjavÃ­k ReykjavÃ­k is the world's northernmost capital: in the summer, the sun doesn't set on the Icelandic city. With rainbow-coloured buildings set against an alabaster landscape, the city is uniquely placed close to some of nature's great wonders - including the Northern Lights and the Blue Lagoon. "Reykjavík" means "smoky bay" and, as the word suggests, the weather can be tempestuous. Still, that doesn't stop this tiny city drawing the crowds.

Reykjavík is fast becoming one of the popular capital cities and has a defiantly cosmopolitan buzz: it's clean, green and compact. With a progressive culinary scene, surprisingly lively nightlife and an air of nonchalant Nordic cool, this city has personality despite the cold. Where else could spawn eccentrics such as the celebrated musician Björk or have a bar dedicated exclusively to The Big Lebowski?

The oldest and grandest hotel in Iceland, Hotel Borg is known for its art-deco style and high-flying clientele – the building has become a city landmark in its own right. Located in the heart of Reykjavík, each of its 99 rooms is different, customised in the hotel’s signature style down to the smallest detail. It’s rumoured that modern-day royals Beyoncé and Jay-Z stayed here. It’s the place to stay if you want to be among the trappings of luxury.

This biscuit-factory turned hip hostel is the definition of Icelandic cool: Kex has its own brewery, excellent restaurant and regularly hosts live music. It’s an ideal place for those seeking for a good vibe without breaking the bank. The private rooms are minimal but have a distinctive aesthetic, lots of them come with a sea view. Don’t miss a meal in the gastro pub where dishes are inspired by Icelandic heritage and local produce.

Located in the heart of city, the historic building of Hotel Kvosin mixes old and new. Rooms are spacious and open plan, with living areas and kitchens done up in think white with touches of blue. The Klaustur bar is a great place to start the night – afterwards move to Reykjavík’s nearby bars and restaurants.

Reykjavík Residence is a cross a between hotel and guesthouse in a well-located (and rather beautiful) building. Sleek, mini-apartments mean you can really make yourself at home, while breakfast delivered straight to your door in the morning is the stuff of dreams.

It might be a Hilton but Canopy is actually one of the city’s coolest hotels, offering a design-led stay where exposed volcanic brickwork is softened by velvet in shades of ocean. The hotel is set across six connected houses in downtown Reykjavík, making it the perfect place to start exploring the city and beyond, while a variety of rooms will suit all kinds of travellers. Don’t miss the fresh fish in the restaurant.

Luxurious and well-located in the old harbour area of the city, Black Pearl offers some of the best apartments in Reykjavík. Spacious and bright with ample living space, the deluxe suite even has its own private lift. Black Pearl pride themselves on service and making guests feel special – book yourself an in-room massage just because.