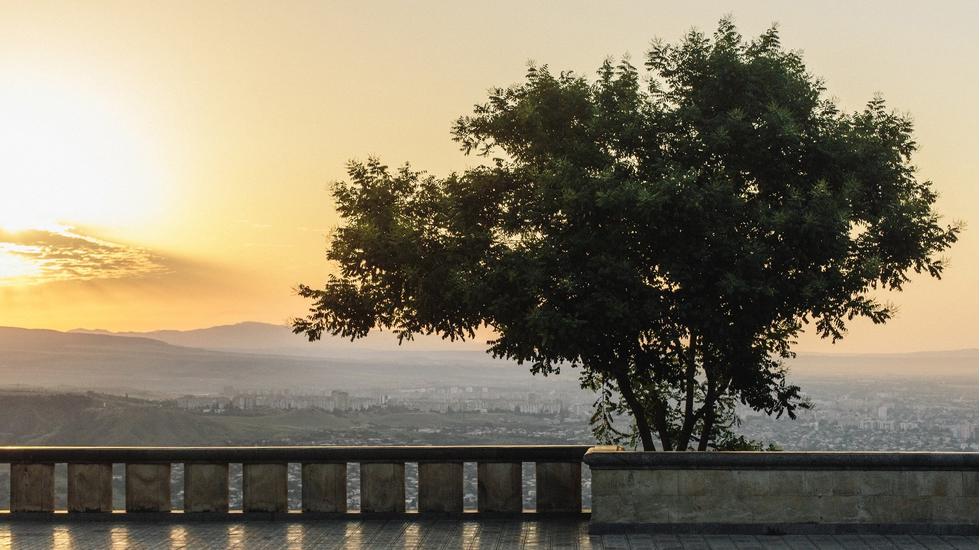 Wedged Wedged between Europe and Asia, within close proximity to the lucrative Silk Road, Tbilisi's advantageous position has not only defined much of its turbulent past, but it has also created a distinct cultural blend that has influenced the city's religion, language, arts, cuisine and architecture.

In the 15 years since the "Rose Revolution" - a shift from communist rule in 2003 - the city has bounced back with a vengeance thanks to an emerging creative set determined to put Tbilisi on the global map. A hodgepodge of crumbling balconied buildings, stern Soviet structures, grand European piles and Moorish architecture provides the charming setting for a slew of design-led hotels, high-fashion boutiques and buzzing restaurants and bars, packed with the city's liberal elite.

Top that with the dramatic setting of the nearby mountains, delicious food, and warm, Georgian hospitality, this is a city that's worth visiting over and over again.

Housed within the atriums, passages and courtyards of a soviet-era publishing house, the Stamba Hotel’s design has retained the building’s brutalist framework but with added sheen to bring it bang up to date. While industrial-chic interiors have been done time and time again, in the bedrooms this theme gets a refresh. Exposed brick and bare concrete are offset by gold furnishings and bold tiling; check in to the Aviator Signature, if only for the gold bathtub conspicuously standing in the middle of the room. Subterra, you’ll discover a chic casino buried in the depths of the hotel’s equally appealing library. A good choice for those with a taste for luxury – as indicated by the website’s “helicopter” tab.

The sibling of Stamba, this neighbouring hotel boasts similar allures while helpful staff donning Wes Anderson-esque uniforms set the scene for a somewhat quirkier stay as soon as you pitch up. Dark-wood floorboards, vintage-light fittings and patterned wallpaper that would seem kitsch anywhere else are juxtaposed with warehouse-style windows that flood the rooms with a soft morning glow; if you can, opt for a room with a terrace. Come evening, saunter downstairs for at the hotel’s bar and lounge among Tbilisi’s coolest cats, who spill out onto a buzzy outdoor greenhouse and garden.

On the left bank of the Mtkavri River, Fabrika Hostel has put Chughureti, a once-forgotten district, back on Tbilisi’s map. Housed in an old sewing factory, emblazoned with graffiti by over 30 local artists, the hostel sits within a larger concept that includes cafés, bars, restaurants, artist’s studios and shops championing local crafts. Inside, the large, open-plan lobby – filled, of course, with laptop-wielding hipsters – makes way for a number of room options that include dormitories, private quarters and mini apartments with terraces the look out onto the crumbling facades of the historical neighbourhood.

One of many boutique hotels popping up in the city, this on-trend option doesn’t break the bank, unlike its competitors. Luxurious bedrooms feature terraces and freestanding baths, adding a touch of luxury to Communal Hotel’s simple furnishings. Considered details – think wicker headboards, framed artwork, a vintage drinks trolley and marble tabletops – place this entry top of our list for places to stay. Sitting on a quiet street just a stone’s throw from the Old Town and a few blocks from Vino Underground, ideally situated for daytime adventures and late-night debauchery – there’s nothing else quite like it in the city.