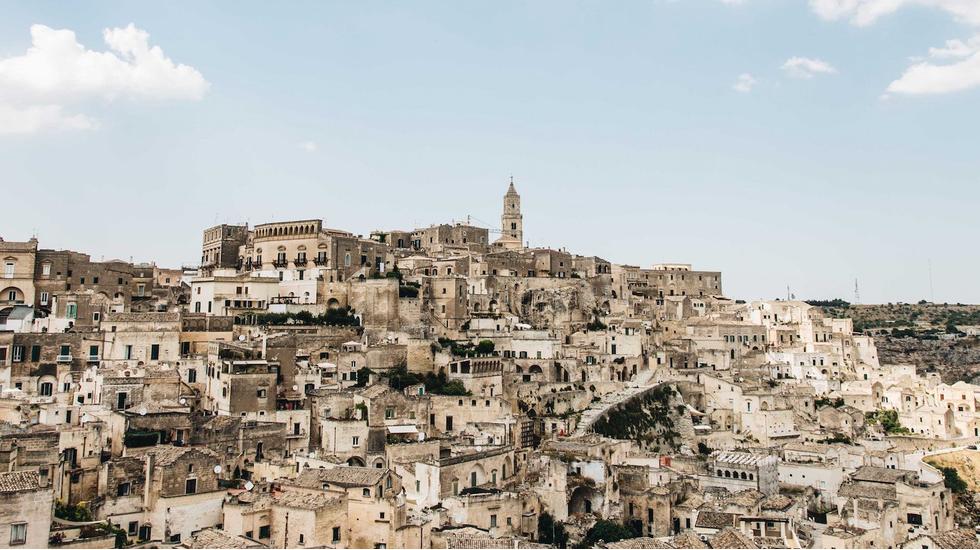 Standing Standing at the mouth of a cave, we watched as evening descended. Stretched before us was a scene of dilapidated beauty. The last of the day's light bathed a honeycomb of dwellings that draped over the flanks of a ravine, its golden glow picking out a patina of sandstone, muted terracotta and flaking peach. A gentle sawing of crickets began to chorus. All else in the backstreets was quiet. As the cool night air drew in, lights flickered like fireflies in the maze of buildings below us. Three years had passed since I first heard the story of Matera. Finally, I had made it here. I was utterly enchanted.

Matera was the first stop on our road trip through southern Italy, and the two nights carved out of our itinerary here were the real reason for the whole trip. Despite being just over an hour's drive from Bari, southern Italy's second largest city and a regional airport hub, Matera has stayed off the tourist trail. While Puglia has become a hotpot - the curiously conical dwellings of Alberobello and the sparkling white city of Ostuni heave with visitors each summer - Basilicata, Puglia's neighbouring region and the home of Matera, is yet to catch on.

Visit Matera now and you'll find the ancient city blissfully quiet, its authenticity unadulterated. It's mostly only Italians that visit here, the sing-song energy of their conversation the soundtrack that hums through the city's streets.

Matera may not be on the tourist map yet but the lure of its story - one of the most dramatic tales of rebirth in Europe - is irresistible. As one of the oldest continually inhabited cities on earth, the city is characterised by a maze-like network of ancient cave dwellings - sassi - that have been inhabited since the Paleolithic era. Less than 70 years ago, around 15,000 people were still living in these caves; large families and their livestock squeezed together in dark dwellings with no natural light, electricity or water. Matera was overcrowded, riddled with disease and crippled by poverty. In 1945 Carlo Levi's book Christ Stopped at Eboli threw light on life in Matera and a wave of political attention followed: the Italian Prime Minister denounced it as the "shame of Italy" and a mass evacuation of the sassi took place, leaving a vast abandoned city in its wake.

Fast-forward to today and the tide has turned once again for Matera. Boosted by its Unesco heritage status and the attentions of various filmmakers, the city has received an increasing interest in its restoration. A wave of entrepreneurs have breathed life back into the sassi, transforming its cave dwellings into boutique hotels, stylish restaurants, artists' workshops and galleries. The shame of Italy no more, Matera was crowned as Europe's Capital of Culture 2019.

With Matera's story entrenched in our minds and darkness having fully fallen, we headed into our cave - a lovingly restored dwelling that would be our home for the next two nights. Part of Locanda di San Martino, our room was set apart from the main hotel, tucked down a narrow backstreet that placed it right in the heart of the sassi. Inside, the pared-back design allowed the beauty of the cave to speak for itself: rock-hewn vaulted ceilings, bare sandstone walls and a rain shower taking centre stage in the main room, its glass encasing blending elegantly with the surroundings.

The next day we were woken by the sound of church bells ringing out across the ravine as a soft morning light seeped through a small porthole window into the dark cave. Shaking off the night's hibernation, we set off, eager to explore the city. We headed first to Casa Noha, a restored cave-home-turned-museum, where a series of rooms have been elegantly repurposed to tell the fascinating tale of the rise and fall - and now rebirth - of the city.

Inspired by Casa Noha, we explored the city with fresh eyes. Reaching the rock church of San Pietro Barisano, we stepped out of the midday heat into its cool interior - a quietly beautiful space with rough arching walls painted with faded frescoes in muted shades of mustard, terracotta and sky blue. Rock-hewn statues lined the perimeter of the main room, at the centre of which a vast, empty frame suspended between pillars took the place of the missing altar. In the space below the church a series of small underground vaults linked by narrow tunnels were carved with little niches where corpses were once drained.

Blinking back into the sunlight, we wandered on, our path soon skirting the city's edge. The road meandered along the border where the crumbling sassi surrender to the rocky ravine, the opposite mountainside forming a rugged slope pockmarked with caves. As the path swerved back towards the city, we spotted a suntrap terrace and stopped for lunch. Kiev Café may not sound authentic, but its flavours were: chewy mozzarella-laced parmigiana, a caprese salad bursting with fresh tomatoes, and hunks of Matera's bread - the city's pride and joy.

As afternoon shadows cast across the street, we started making our way back to our hotel, lured by the promise of a visit to its spa. We surrendered ourselves to the labyrinthine sassi en route. In some areas, nature had reclaimed long-forgotten backstreets: little nests wedged their way into cracked walls while vines straddled alleyways, green tendrils inching along disused telephone wires. In other streets, wrought iron balconies, sea-green shutters and heavy bougainvillea broke up the neutral palette of the houses. Every now and then we stumbled across a viewpoint - striking vistas unannounced by the normal fanfare of selfie sticks and camera touting tourists.

Back at the hotel we headed for the spa. Housed in a converted cave dwelling, the spa's sauna, steam room and relaxation spaces were dotted around an atmospheric collection of vaulted rooms. The pool, however, was the unrivalled focal point: its illuminated waters flowing through a series of interconnecting chambers, reflections of ripples dancing on the sandstone walls.

Fully relaxed, we went out in search of dinner. The sun was going down and locals now filled the main square: elderly men donning farmers' caps clustered in sunny patches on low walls, children darting to and fro, old ladies, deep in conversation, shuffling past arm in arm.

We headed to Osteria San Francesco, a fantastic restaurant run by a husband-and-wife team. The minimalist style of the space - a white arched stone ceiling, simple furniture, the noise of the open kitchen muted behind a glass wall - allowed the food to speak for itself. We kicked things off with poached eggs adorned with shavings of truffle and parmesan. Tender wine-soaked veal cheek followed, as did an unforgettable lasagna.

The next morning - our last in Matera - we woke early to catch the sunrise. We stumbled from the inky cave in time to see the sun's glowing orb breech the horizon and bathe the sassi in a soft, peachy glow. We ran through the streets, racing the rising sun to reach our favourite viewpoint, our eager footsteps echoing along the cobbles. Aside from a man balancing a tray of freshly baked bread on his shoulders, the streets were utterly deserted.

We settled down at the viewpoint to take it all in, watching as a gathering of starlings undulated above the sleeping city. The sunrise said all: a frail moment of magic and transformation before the real world kicks in. Matera too - long-forgotten and once cast aside - has been quietly transforming itself as modern life has crashed on elsewhere. Now, as the city prepares itself for a new dawn, is the moment to visit Matera. A city that's busy unravelling its own mesmerising story of transformation as it slips back into the consciousness of the world.