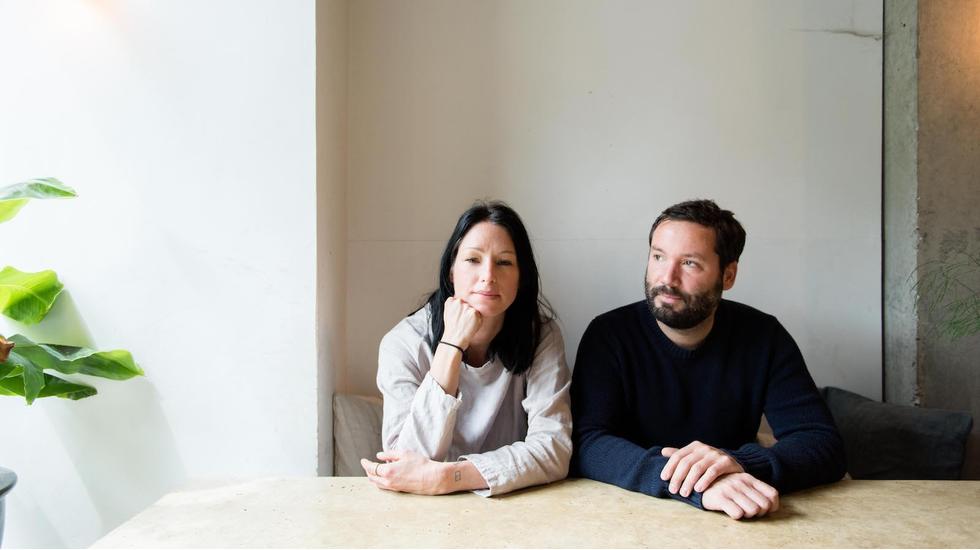 Living Living around the corner from Rawduck is not always a good thing. Whenever it comes to planning drinks, dinner or brunch, we have every intention of booking somewhere new. And then we remember Rawduck's concrete bar stacked with jars, the fanning banana leaves, the spinning vinyl, the natural wine and the eclectic, satiating food. Any hopes of branching out are dashed in an instant. Rawduck is the sister restaurant of Ducksoup in Soho and the two spots couldn't be more different to look at - while the Hackney branch is a big, breezy dining room with long sharing tables and a large open kitchen, Ducksoup occupies a glowing, stripped-back nook on Dean Street, with most of the seats along the upstairs bar. But both restaurants are rooted in the same culinary philosophy.

Clare Lattin (owner) and Tom Hill (executive chef) celebrate simple, seasonal food in their constantly shifting menus. They overflow with colourful, comforting dishes which hum with the memories of their travels around the Mediterranean, the Middle East and South East Asia. On Rawduck's brunch menu, hiitake dashi with poached eggs and tarka dhal huddles up beside labneh with grilled aubergines. There are (surprisingly delicious) drinking vinegars, fig, heather honey and almond milk with turmeric, black pepper and ginger juice. And lifesaver espresso martinis. In the evening, the menu offers charred quail with curry tahini sauce, salted cod with bibier chilli or buttermilk fried chicken with fermented soy. Over in Soho, diners slurp oysters from their shells and feast on sharing plates of slow-roasted lamb shoulder with artichokes, squid-ink fettuccine and shaved fennel, mint and capers. They sip on natural wines in an array of colours - gold, amber, peach. In both spots, the wine list takes up an entire wall, scribbled on a chalkboard. Clare and Tom were some of the first purveyors of natural wines in London and are still some of the best. "Once you start drinking natural wine, your taste buds change and you can't go back." Tom tell us.

And now they have released their first book - Ducksoup Cookbook: The Wisdom of Simple Cooking. It encompasses all that is great about the two restaurants: a passion for fresh ingredients, experimental cooking and conversation-starting flavours. It brings Rawduck and Ducksoup's signature dishes into the home, including ferments, preserves, brunch dishes and comforting dinners. You would have to have a pretty serious aversion to the kitchen to not to want to throw on some kind of fabulous linen apron and get going with these recipes right away. We popped into Rawduck to chat to Clare and Tom about food, travel and the joys of fermenting.

Tom: Fundamentally our cooking is the same in both restaurants - seasonally led and as simple as can be - we try not to overdo the cooking process, allowing each ingredient to speak for itself. You won't find rich sauces overpowering the flavours of the ingredients. The main point of difference is that Ducksoup tends to be more Mediterranean focused, our menu often follows blue skies and sunshine. But of course, in winter, we are hearty and satisfying. At Rawduck, our inspiration comes from more far-flung places and you'll find flavours and seasonings from Japan and India as well as the Med and Middle East. A more healthful approach to cooking is perhaps more apparent here, because we do a lot of fermenting which appears in dishes on the menu, as well as making our own drinks such as fruit kefirs, drinking vinegars and kombucha.

Where do your culinary inspirations come from when creating a menu?

Clare: We travel a lot and take ideas from our experiences, but never in a like for like way - we often take a small element of a dish and turn it into something else. For example, we were recently in Venice and went out for morning chicchetti (small snacks often served on bread) and we ate some delicious ingredient combinations. Tom took these and turned them into his own dishes, a cold plate, warm salad or risotto. Because our cooking is so uncomplicated and seasonal, often the food in the restaurant comes from dishes that we're cooking at home. It's very much an evolving thing; Tom changes the menu weekly and it's rare that anything makes an appearance twice, which is something our customers have come to love. They really enjoy being surprised by what Tom is cooking from week to week.

What do you think sparked the recent obsession with locally sourced food in London?

T: I don't think it's that recent, when you look at someone like Fergus Henderson of St John. He's been celebrating locally sourced for over 25 years, as have many others. But it is much more the norm now, as it should be. There are many factors that have made the world a much smaller place - and we've picked up many influences from how other countries do things, which in turn has made us work with our own food suppliers and farmers in a different and better way.

How did you become interested in pickles and ferments? What excites you about them?

C: Originally it was the health benefits they offered. We went to Japan and were totally inspired by their incredible approach to pickled and fermented foods in their diet. But at Rawduck, the fermenting is as much about the taste as the health aspects - fermenting foods create such a surprising flavour dimension. Few ingredients can touch on it. It's like creating your own mystery in the world of flavour.

What kind of reaction do you see when people try natural wines? Are people surprised by the difference in flavour?

C: Yes. I think a lot of people are astonished by the difference from the non-natural stuff they've been drinking, but in a totally good way. They are surprised that the flavour of mass-produced wine is so far removed from the flavour of the grapes. A natural wine is so full of expression, from the grapes to how it was made and where it was grown. The natural wine movement has moved on dramatically from when we first started selling them five years ago.

What are the main differences in having a restaurant in West and East London?

T: Rent is probably the biggest factor - although saying that East End rents and premiums are shooting up rapidly. Customer spend is higher in Soho - being East we are a neighbourhood restaurant so spend is expected to be lower. Other than that, I would say predictability of trade. In Soho you can pretty much bank on the pattern of trade, but in East you can't so much. It took us a solid 18 months to get a good handle on the patterns. In Hackney our audience tends to be younger, although both restaurants do share similar customers.

Why do people in London suddenly love brunch so much?

T: I think it comes back down to the world being smaller and having access to how other countries do things. Brunch is a big thing in America, New Zealand and Australia and all of these countries have had a massive influence on the UK restaurant scene in the last seven or so years.

How does the atmosphere at brunch differ from dinner time at Rawduck?

C: It's much faster and louder. It's a light space; simple, clean and modern, so it works really well at brunch. Plus the communal tables are perfect for both families and large parties. In the evening, the lights go down and the candles come on. It's more subdued.

Where would you buy a crate from?

The guy who makes flatbreads in Ridley Road market. They're just flatbreads but there is no 'just' about them.

The Marksman on Hackney Road.

Most interesting chef around at the moment?

Merlin Labron-Johnson at Portland and James Lowe at Lyles.