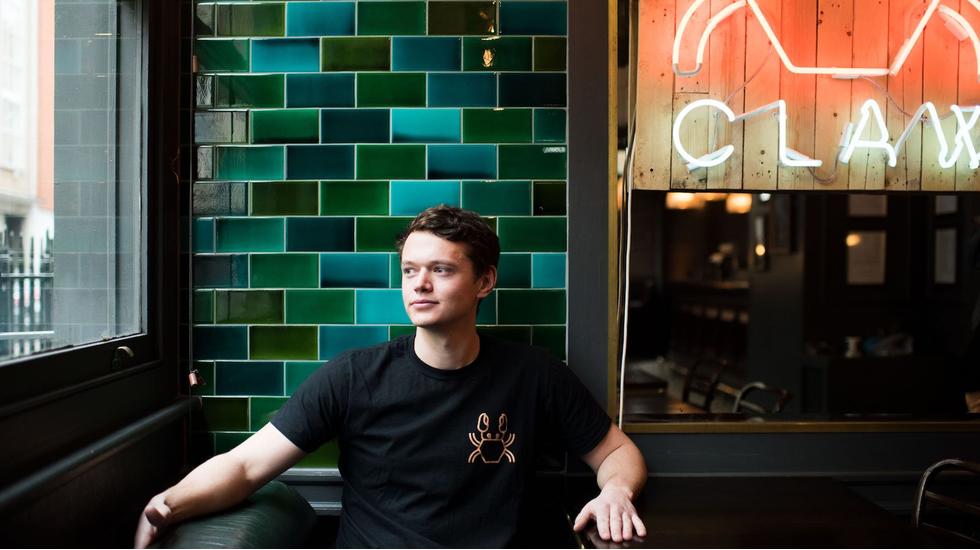 "Sociable sustainable seafood" is the promise of CLAW, the only purveyors of crab you need to know about this summer. You'll find inventive seafood, seasonal vegetable dishes and, most importantly, monumental crab sandwiches at one of their many pop-ups and street-food stalls, as well as at their recently opened takeaway site slap bang in the centre of the City.

Founder Fabian Clark grew up spending summers on the choppy English coast, gorging on shellfish plucked fresh from the surrounding waters. Back in London, he found himself pining for a juicy crab sandwich, just like the ones he'd eaten on the Isle of Wight. Baffled by the lack of fresh crab available, he dived into research and was surprised to discover that Britain exports around 80% of its top-quality fresh seafood to Europe.

"I realised that we don't appreciate the abundance of seafood on our doorstep", he says. "To generalise, Britain has always had a love affair with fish and chips, but beyond white fish I think the appetite starts to die off. Along the coast people really do cherish what's on their doorstep and use the amazing produce. I wanted to bring a bit of that inland." Soon enough, Fabian had quit his job in branding (where he had learnt a good deal about the food industry) and launched CLAW with the aim of bringing fresh crab and other fish dishes to festivals, markets and pop-ups around the country. The sweet, fleshy crabs served at CLAW come straight off the boat from a fisherman in Salcombe, Devon, and are probably the best you'll ever get your hands dirty over. As well as being one some of the most versatile seafood around, crab is also among the most sustainable. Which means going to town with lashings of melted butter without a morsel of guilt.

We paid Fabian and the team a visit during their recent residency at the Sun & 13 Cantons pub in Soho. Over dishes of crab claws in burnt-lime butter, kimchi-fried soft-shell crab, crab mac 'n' cheese and a perfectly charred crab, Fabian told us more about CLAW, upcoming pop-ups and why seafood is best kept British.

Do you think Britain has lost its appreciation for home-grown seafood? Do you think that's changing?

With the growth and popularity of food, people are becoming more adventurous and willing to try something different. In the last five years I've noticed a slow but steady increase in the appreciation of sustainable and locally sourced food, whether it's meat, fish or vegetables. As a result, I believe undervalued seafood such as welks, cockles and ling are slowly on the up.

What do you love about British crab?

It's lobster's less expensive cousin and packs a bigger flavour punch. Crab is incredibly sustainable and we have such an abundance of it across our shores. Compared to lobster and other shellfish it definitely has a deeper taste profile.

Tell us a bit about where you get the crab for CLAW from. Why did you choose Devon?

Suppliers all around the country will always say their region is the best for something and there are numerous debates about where the best crab comes from. Whether it be Devon, Cornwall, Grimsby or Swansea, the fishermen always say they have the sweetest crab. I initially started buying crab from wholesalers in London, which was all sourced from Devon but extremely expensive. Once I started buying larger volumes I began speaking to crab pickers all around the south coast because I knew the quality would be high, but most importantly, I knew I'd be cutting out the middle man. We use two suppliers, one in Devon near Plymouth and the other on the Cornish coast near Tregoose. The latter also supply some of the best quality fish we've ever seen; we once received a whole coley fish that still had rigamortis!

What should really good crab taste like? Are there any specific qualities you look for?

How would you describe the food at CLAW?

We're conscious that many people prefer meat, but we're trying to change that and demonstrate that seafood can be delicious, accessible and fun. Preconceptions of seafood have connotations of a whole grilled fish or a fruit de la mer but at CLAW the food is much more casual. Some of our most popular dishes have been the most basic, such as our crab mac 'n' cheese, squid and charred avocado burger or our cracked crab claws in burnt lime butter.

What's your favourite thing on the menu right now?

We recently did a four-night pop-up and the weather was really cold so we decided to run a crab and raclette toastie - it was absolutely delicious.

You're planning to open a restaurant soon. What kind of place do you want it to be?

We want it to embody our ethos of promoting sustainable seafood in a casual environment. It will be a place you could linger for a couple of hours or just grab something for the road.

What's next for CLAW?

We're opening a takeaway site in Finsbury Avenue Square in the City in mid-April. It will serve all our street-food classics along with some new seafood dishes, but also some meat and veg so there's something for everyone. We're looking to open a permanent restaurant later this year and are currently reviewing options. Watch this space!