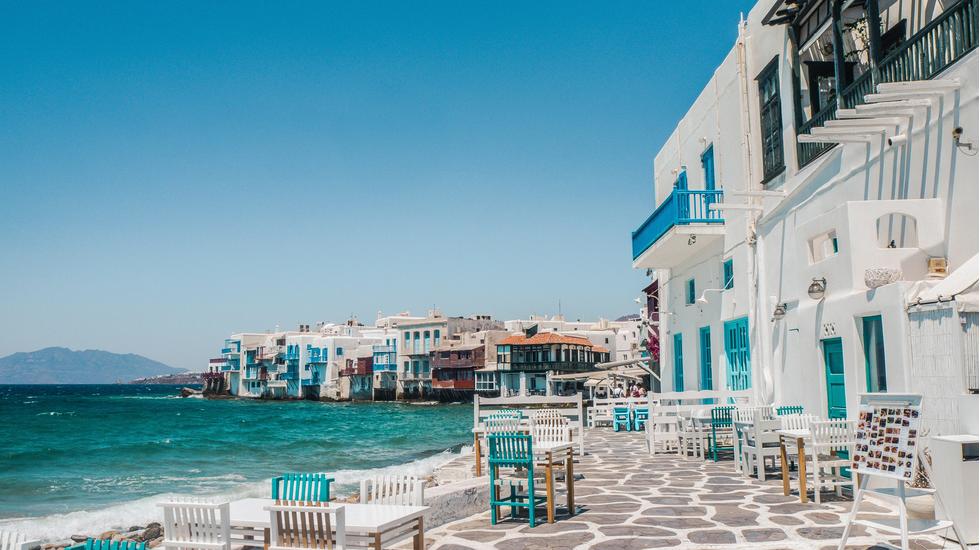 Situated just 26km from Athens' bustling port of Piraeus, the dinky island of Aegina has a knack for making you feel like you've teleported to a scene from ancient Greece, or Mamma Mia! - we couldn't resist. A hefty chunk of the triangle-shaped island is overtaken by an inactive volcano, while, elsewhere, you'll find sprawling fields of almonds, olives, figs and pistachios. With a full-time population of just 10,000, the island's pace of life is slow and thoughtful, making for an ideal sun-soaked escape.

Fishermen huddle around the port, hauling in their daily catch, while laid-back locals make a beeline for their favourite bakery to snag feta- or tahini-based pastries. Don't be fooled, though. Come Friday, boho crowds of Athenians escape the city for a long, lazy weekend of swimming, feasting and socialising. Follow their lead and meander between the cobblestoned streets of the Old Town, paddle in gin-clear waters, then dance until sunrise at one of the island's vibrant beach bars.

Aegina is one one of Greece's oldest inhabited islands, so it would be rude not to carve out a day to tour some of the many crumbling ruins. Start by heading to the Temple of Aphaia - an incredible monument that signifies one part of the "Sacred Triangle of Temples"; the other two being Sounion's Temple of Poseidon and Athens' Temple of Hephaestus. After that, Aegina's highest peak, the Mount of Ellania, beckons. Once you've climbed to the top, you'll be rewarded with the sight of one of Europe's oldest ruins - the Temple of Ellanios Zeus.

There's true beauty and pleasure to be found in staying in a hotel that reflects its surroundings - a space that weaves history and culture into every detail of its personality makes for a magical getaway. For that reason, we suggest bedding down at Nikolaou Residence. Of the property's three spacious studio-style suites - Rhodi, Elia and Fistiki - we like Rhodi the best, for its earth-toned furnishings, hints of soft grey detailing and abstract illustrations. With two glorious private terraces, mornings are best spent drinking in undisturbed sea views while scoffing a platter of freshly baked, spinach-packed pastries.

Try any of the waterfront tavernas in Aegina and you won't be disappointed. We're swinging by the open-air, no-frills Nontas. Set in the picture-perfect village of Perdika, the family-run eatery has been serving traditional Greek dishes since it first opened its doors back in 1936. From homemade pies and line-caught fish to an entire menu dedicated to pistachios - an island speciality - you may well find yourself returning for breakfast, lunch and dinner. Our order? The pistachio-pesto squid, which has to be tasted to be believed.

Friday nights are well spent at Bocampo Beach Bar. Join holidaying Athenians lounging beneath bamboo parasols, plunge between cocktails into the warm and sparkling Aegean and dance until dawn to top tunes spun by local DJs.

That friend who enjoys remote living. They'll appreciate the tranquillity and natural beauty.

Visit in September; that way, you can attend the island's famous Pistachio Festival - yep, seriously. The four-day event, which takes place in September, transforms Aegina's Old Town into a vibrant market set-up, with stalls of proud locals showcasing their finest produce. Jazz enthusiasts, however, should look to be on the island between 8 and 28 August, when the International Music Festival of Aegina takes place.

Whether you like them or not, grandad-style sandals are back and they're here to stay - just minus the socks this time. Pack a pair of these Ancient Greek scalloped-strap sandals to ramble Aegina's winding streets in true local style.

Take a direct flight from London Gatwick to Athens International Airport, from where Aegina is just a 40-minute ferry ride from the city's main port of Piraeus.