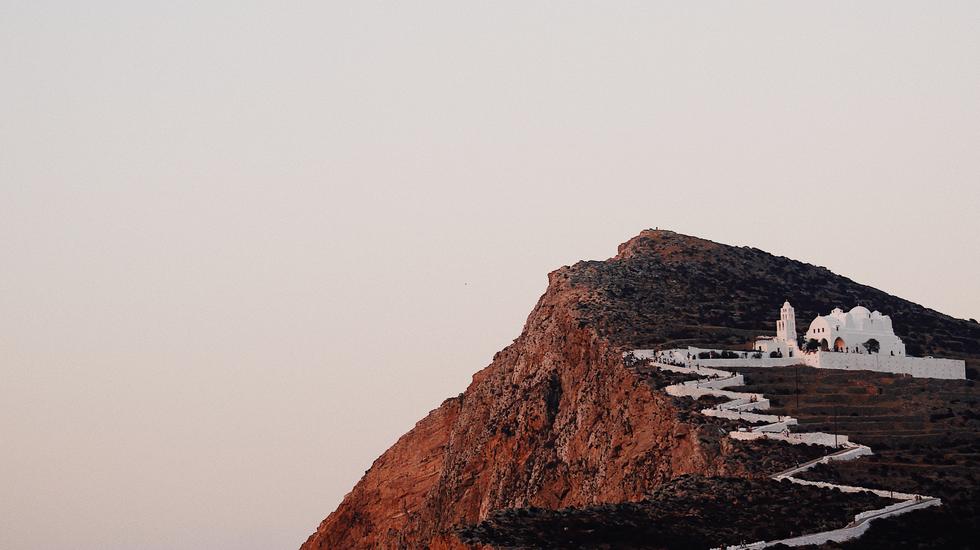 The The Greek islands have a unique draw: blue waters, whitewashed houses, unparalleled seafood and bronzed septuagenarians playing backgammon in the afternoon heat. A little-visited, unspoiled island is the Holy Grail here - and something that's increasingly hard to find. Give Mykonos and Santorini a breather and try catching the ferry out to one of these lesser-known Greek islands. You almost probably don't already know about them, though the ouzo's on us if you do.

Ikaria, Folegandros and the 12 lesser-known Greek islands for a secluded summer getaway

Samothraki is a boho enclave of sleepy villages with panoramic views; visit for the hundreds of natural pools and waterfalls scattered across the island. Pack hiking boots as well as bikinis so you can explore the terrain - Mount Fengari (meaning "moon") is the highest peak in the Aegean and said to be the spot from which Poseidon watched the Trojan War - before taking a cooling dip. Don't miss the thermal pools at Therma either.

Best for: getting back to nature

Kythira has everything you could want from a Greek island; beaches, myths and seafood on tap. Rent a car to tour the island and you'll find crumbling monasteries scattered between hidden coves. Make a pitstop at Chora Castle, a 13th-century Venetian fort with impressive views of the island. The idyllic capital of Chora is packed with higgledy-piggledy artisan shops; look out for handwoven fabrics and locally gathered sea salt.

Best for: the all-round island experience

Kythnos comes from the Greek "to hide" and this islet is arguably Greece's best-kept secret. Athenians frequently make the short journey to the island, but few tourists have ever heard of the place. A low-key islet with classic Aegean beauty; think sun-parched mountains ringed by green-blue waters, with plenty of shoreline tavernas in which to while away the hours. For a culture hit, head to Panagia Kanala, one of the most important pilgrimage sites in the Aegean.

Lefkada is connected to the Greek mainland, meaning you can drive straight to its beckoning white sands with minimal effort. Visiting the island is like going back in time; traditional village life plays out with inhabitants sitting outside their houses in the cool evening breeze - a far cry from the summer humdrum of Mykonos or Corfu. Stumble across forgotten villages and centuries-old wells dotted among ancient olive groves before hitting the beach, the best being on the rugged west coast.

Best for: a local experience

Named after Icarus, the doomed youth who flew too close to the sun, this wing-shaped island seems to have magical properties; residents live longer than almost anywhere else in the world. It's believed that a diet primarily of vegetables, olive oil and herbal tea is responsible for their glowing disposition. Beyond prolonged life expectancy, Ikaria is known for its mountainous terrain, offering a hiking paradise of paths crisscrossing between forests and lakes.

Best for: increasing your life expectancy

Leros may be late on the holiday scene, but this quiet island is steeped in history. A Byzantine fort, harbour town built in the style of Mussolini's Italy and ancient shipwrecks scattered off the coast are just some of the delights that await. This is a Greek island with distinctly Italian feel (it was ruled by Italy between the world wars) meaning you can sip the perfect cappuccino while strolling through Italianate tree-lined boulevards.

Best for: a culture hit

Evia is the second largest of all the Greek islands, just a hop, skip and a jump from Athens. As well as rugged mountains and beautiful beaches, there are plenty of ancient sites to peruse and a city for those who can't do without cosmopolitan living. Head to the green north of the island to horseback ride and hike across the fertile landscape with lush vegetation continuing all the way down to the coastline.

Best for: a quick escape from Athens

This tiny island (it's less than 12km by 4km) is spectacular; emerald-green water, deserted beaches and an undulating landscape, all heady with the scent of wild thyme and oregano. The medieval-looking capital of Chora sits on a clifftop, making it one of the most striking towns in all of the islands. From there, walk up to the white church dedicated to the Virgin Mary - the best place to watch the sunset.

Best for: a romantic break

The journey to Amorgos may be long (it's a six-hour ferry from Athens) but it's worth it for the otherworldly atmosphere that awaits on an island imbued with spirituality - although that may have something to do with the amount of raki that is drunk here. Visit Hozoviotissa monastery, dramatically built into the rock-face by hand. Rocky terrain means Amorgos is also an excellent place to hike; it's said that wherever you are on the island, you can always see the blue sea all around you.

Best for: getting away from it all

Skopelos is so picturesque that Hollywood came calling; Mamma Mia! was shot on the island thanks to its rolling hills, clear waters and pretty churches. Fortunately, its time in the spotlight has not resulted in boatloads of tourists making their way to its shores; island life remains fairly unspoiled. Sunburnt landscapes, quiet tavernas and cobbled towns are yours for the taking - just don't start singing.

You'll want to stop off at Patitiri, the lively village from which everything spills out. Hora, the old town is like a cornucopia of godly goodness - sprouting with passion flowers and fruit trees - which is best experienced in the evening, when the daily dispatch of day-tripping tourists have been ferried back to the bigger islands. A visit isn't complete without ogling the subaquatic majesty of Alonissos' Marine Park, the largest marine-protected area in Europe. Before you go, grab a packet of sweets from the Women's Cooperative of Alonissos - actually, it's a four-hour boat-ride back to Agios Constantinos; grab two.

Sound familiar? Pink Floyd fans might recognise this place as "Castellorizon," their Grammy-nominated song inspired by Dave Gilmour's jaunts on the island. Of course, it comes with all the secluded, pine-fringed beaches you'd expect from such an island, but the its main village - a dusty riot of pinks, yellows and green neoclassical buildings which hug the bay - is the real draw. "Bijou", "bougie" and "chi-chi" are all often used in conjunction with Kastellorizo. It might be the largest island in an archipelago of the same name, but ferries to the Kastellorizo only run a couple of times a week, meaning it has remained a highly exclusive destination.

Best for: an undercover bohemian escape