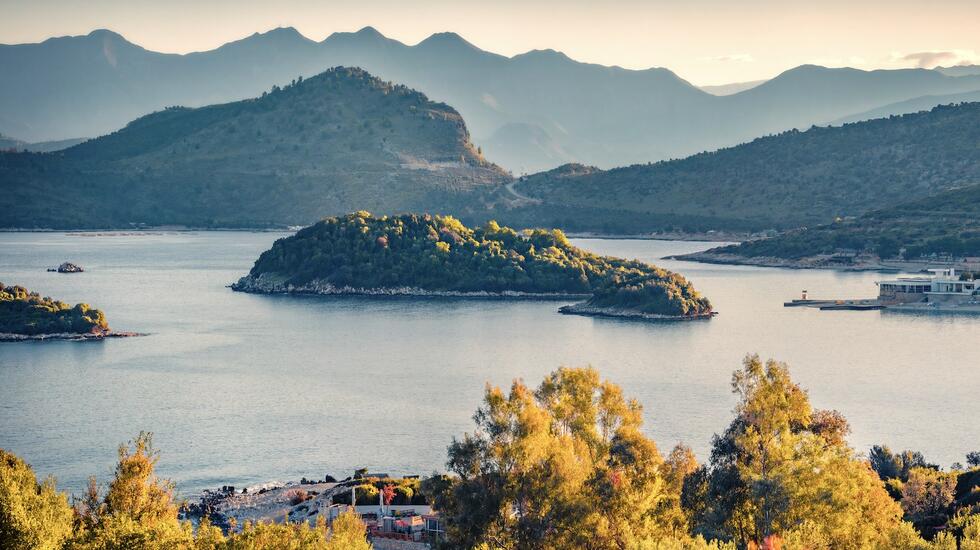 Kissing the border of Greece and separated from sun-baked Puglia by a slither of water, the craggy coastline of Albania is fast becoming a favourite destination among serenity-seeking travellers. Blessed with tranquil shores and rugged cliffs, plus a striking autumn leaves season, the region offers plenty of pretty towns to explore. Our choice? The sleepy and stunning Ksamil.

Sitting pretty on the country's southern tip, Ksamil's white-sand beaches, crystalline waters and hip hangouts rival those of many better-known Ionian hotspots, at just a fraction of the price - and with a fraction of the crowds, too. Spend September days rambling around ancient ruins, dancing beneath bamboo-clad beach shacks and feasting in ridiculously cool restaurants with our pick of the town's best bits.

A 15-minute drive south of Ksamil lies Butrint National Park. Spanning some 94sq km, the Unesco World Heritage site is home to wetlands, freshwater lakes, salt marshes and open plains. But this isn't your average green space - it also contains the ruins of the ancient city of Butrint, which dates back to the eighth century BC and was once a thriving fortified city with an acropolis.

Let's be honest, accommodation isn't quite up to The Ned levels in this area of the world just yet. What Ksamil stays lack in design kudos, though, they more than make up for when it comes to dinner with a view. Bed down at the centrally located Poda Boutique Hotel and head straight to its shoreside kitchen for a tempting array of frozen cocktails, fruit platters and grilled specials. You won't be disappointed.

A sea-facing restaurant that serves the freshest fish in town? It's got to be Ostro Beach Bar & Restaurant. Combining the best of Ksamil's no-frills attitude with sunny island style, interiors showcase seagrass pendant lights, wooden screens, braided chairs and corner sofas - and that's not even mentioning the covetable crockery. Our order? A caesar salad, fried calamari and crab croquettes to start, followed by the seafood risotto and linguine shrimps zucchini, with a slice of crumbly cheesecake being the pièce de résistance. There's also a superb sushi menu, if that's what you're in the mood for.

Head to Bora Bora Ksamil. As old-school as they come, this low-key wooden kiosk sits on the edge of white-sand Plazhi Bora Bora beach. Wrapped in a gorgeous green blanket of wild flora, the bamboo canopy provides welcome shade from the midday sun - grab a seat under it and enjoy a refreshing cocktail. But it's also just as perfect at sunset, when twinkling lights and a house playlist draw a crowd of relaxed bohemians.

That friend who is always up for an adventure, who will have no qualms about setting sail and exploring the neighbouring Greek isles. After your Albanian stay, head to Corfu next - it's just across the sea.

A pair of stylish open-toe shoes hardy enough to allow for a proper trek? We'll have three pairs, please. Pack these Balenciaga Tourist embroidered two-strap sandals for the ultimate level of comfort when stomping around town. Crafted from hard-wearing ripstop and complete with a chunky rubber sole, you'll smash your daily step target in no time.

Take a direct flight from London Gatwick to Corfu International Airport, from where Ksamil is just a one-hour catamaran crossing away.