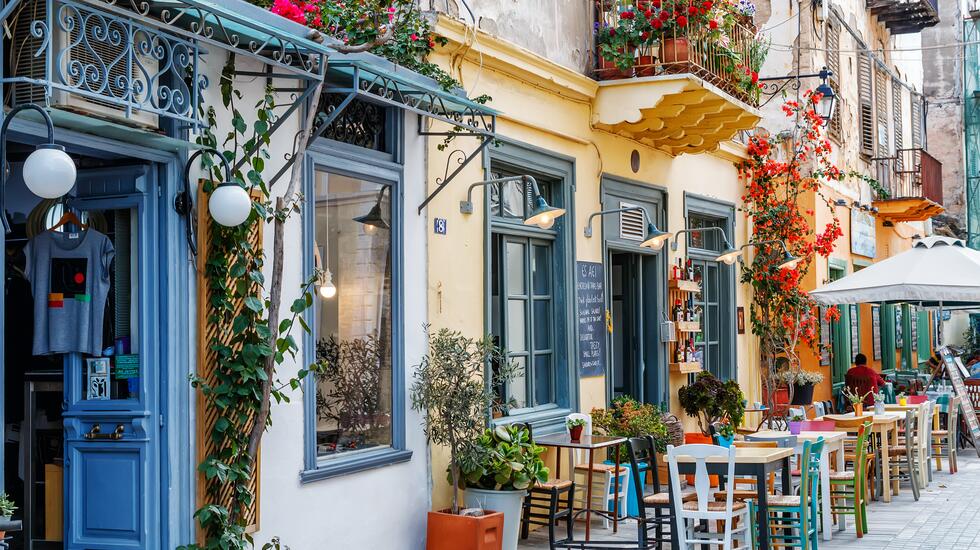 Just a two-hour drive from Athens, Nafplio is exactly what you'd picture a charming Greek getaway to look like: sun-drenched tavernas, leafy squares, steep, higgledy-piggledy streets and beaches beautiful enough to rival those of the Caribbean. Made the official first capital of the newly liberated Greece in 1829, this remains a thriving port city thanks to an idyllic position on the Argolic Gulf. This is a top destination for those seeking a Greek escape minus the crowds of better-known hotspots - Mykonos, Rhodes and Paros, we're looking at you.

The beauty of Nafplio is that it doesn't take long to explore the entire city. Gaze at colourful flowers and overgrown palm trees hugging Venetian villas, swim between various sandy beaches (Neraki is the best of the bunch) and feed your inner boffin with a tour around the many ancient ruins.

We'd argue that one of the best ways to get to know a city is by exploring its most ancient architecture, and Nafplio is blessed on that front. Start with a wander around the hilltop Acropolis - built by the Venetians and later inherited by the Byzantines and Ottomans - then gear up for a visit to the legendary Palamidi Castle. You'll have to climb a staggering 999 steps to reach it, but it's worth it for the panoramic sea views at the top. Artsy types, meanwhile, should drop by the Komboloi Museum, where a phenomenal collection of beads is on display, including 700 different types of rosaries.

Converted townhouses, family-run guesthouses and quirky boutique hotels are in abundant supply in this buzzy metropolis. There's Carpe Diem Boutique Hotel in the centre of the city, where a private outdoor courtyard promises a glorious sun-soaked stay, and the unassuming Regno Di Morea, where interiors are so chic they could almost pass as a contemporary art gallery. Also in the centre is Anthemion Suites and Villas, whose in-house restaurant is known for rustling up some of the finest Greek grub for miles around. Whether you're in town for a romantic retreat or a mini-break with your best mate, there's a place sure to suit your vibe.

Often it's the restaurants with the gritty interiors that serve the tastiest meals. Enter, Pidalio Taverna. Just a short stroll from the water's edge, its tempting menu offers traditional Greek cuisine with a contemporary twist. Start by ordering the zucchini croquettes, before grabbing a plate of the prawn orzo with a side of the spicy feta dip. Seafood lovers will appreciate the sea bass fillet with grilled veggies.

The sexy and stylish 3Sixty bar is home to one of the finest-looking cocktail menus we've ever seen - and that's seriously saying something. Snag one of the dark-leather banquettes or one of the bar-facing stools. We suggest the latter, partly for its close proximity to the vast collection of spirits, but largely so that you can watch bow-tied mixologists whip up all sorts of playful conocotions. Insider tip: party people should rock up after 9pm, when talented local DJs take to the decks.

That friend who makes an annual pilgrimage to Athens. They can squeeze in a trip to the capital, too, and get the best of both worlds.

Ask any sun-worshipper when the best time to visit Greece is and they'll likely say July. While we love nothing more than sunning ourselves on the high-season Greek sands, there's also something blissfully beautiful about visiting in the early autumn. The light is golden, the air is fresh and the landscape, serene. For that reason, we suggest planning your trip during the month of October.

Nobody wants to be sporting a pasty poolside look. Which is why you need these Amanda Harrington tonal tan drops, which promise a natural olive glow. No tangerines here.

Take a direct flight from London Gatwick to Kalamata International Airport, from where Nafplio is just a 90-minute drive away.