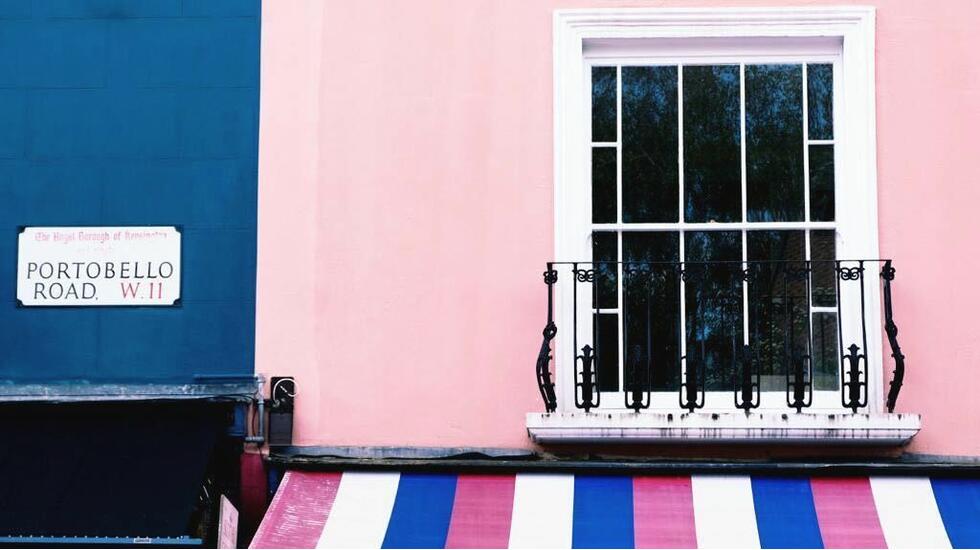 There's something of a foodie renaissance cooking in London's Notting Hill: Palestinian kitchens plating up slow-cooked lamb and herb-drenched kufta; French-inspired bistros offering freshly baked sourdough and forkfuls of creamed greens; neighbourhood eateries putting a devilishly delicious spin on British classics. These newly opened restaurants might be injecting a fresh lease of flavour into west London, but this part of the city has long been a crossroad of cultures.

Back in the 50s, Notting Hill became known for its fiercely free-spirited attitude. Local photographer Charlie Phillips documented much of his youth on film, covering everything from race riots to early carnivals. Today, his artwork can be viewed in a selection of museums and galleries around the world, including London's Tate Britain and the V&A. Fast forward to the 80s, and Westbourne Grove became a honeypot for shoppers, with vintage emporiums and antiques stalls popping up left, right and centre. It was the Noughties, however, that saw the high-end boutiques moving in, many of them in townhouses painted in shades of pastel, with tourists flocking in particular to a certain Notting Hill Bookshop - that one is on you, Mr Grant. Sure, this newfound revolution is putting Notting Hill back on the map, but on this occasion, we're seeing a celebration of W11's multicultural history, one dish at a time.

Alice's antiques arcade. Sitting pretty on Portobello Road since 1887, it's the place to browse everything from stoneware and street signs to musical instruments and life buoys.

The Distillery offers the ultimate spirited sleepover, with a 60-strong gin list and top-notch tasting tour laid on for guests. Three snug bedrooms come complete with old-school vinyl collections and turntables, vintage furnishings and plush bedspreads - plus, the added bonus of undisturbed vistas of Portobello Road. Or, if you're attempting dry Jan, there's The Lost Poet. This intimate four-key guesthouse champions the borough's eclecticism through geometric wallpapers, abstract art and bespoke decorations - the botanically inspired penthouse is worth breaking the bank for. Alternatively, stroll a little further afield to The Hoxton's newly opened Shepherd Bush outpost, where stunning mid-century interiors await.

A teaser of what's to come at Akub, left, and a peek inside Gold.

You're going to want a forgiving waistband. First stop, Straker's. Headed up by chef and social media star Thomas Straker (aka the king of butter), this handsome haunt flaunts the sort of pared-back interiors you wish your own kitchen had - a zinc-topped bar, plants climbing up walls and rustic shelves stocked with independent spirits. The food? It's a 10/10 from us. Marinated olives, wood-roasted oysters, grilled broccoli and custard-drizzled figs - we could go on. Next up, Dorian, the French-inspired bistro that whips up a storm of seasonal goodness. Make it your choice for sweetbreads and seafood-stuffed salads, trout and turbot, chocolates and cheeses. We're eagerly awaiting 16 January, when Palestinian kitchen Akub is set to make its debut. Elsewhere, local favourite Gold is best suited to a romantic dinner date, thanks to its candle-strewn tables. For those that prefer to go hard at breakfast, brunch spots Buvette and Sunday in Brooklyn hit the spot.

The Pelican's front, left, and the interiors of Caia. | Photo credit: Steven Joyce for Caia.

That old-school boozer down the All Saints Road? It's had one hell of a refurb. All blonde woods and dried plants, The Pelican showcases sustainable, local produce, while a bottle menu lists wines' ages and origins alongside a line-up of trophy-worthy light bites. Meanwhile, nearby Caia bar delivers killer cocktails and soulful soundtracks.

That pal who will happily join you in ordering the biggest cake on the dessert menu. If all else fails, you know where to find us.

Hunker down and devour Stanley Tucci's page-turner Taste: My Life Through Food, in which the actor and foodie shares his thoughts on the art of falling in love over dinner, his favourite five-star meals and a fair few celebrity anecdotes, too.

Notting Hill Gate is your nearest underground station, and is serviced by regular Central, District and Circle line trains.