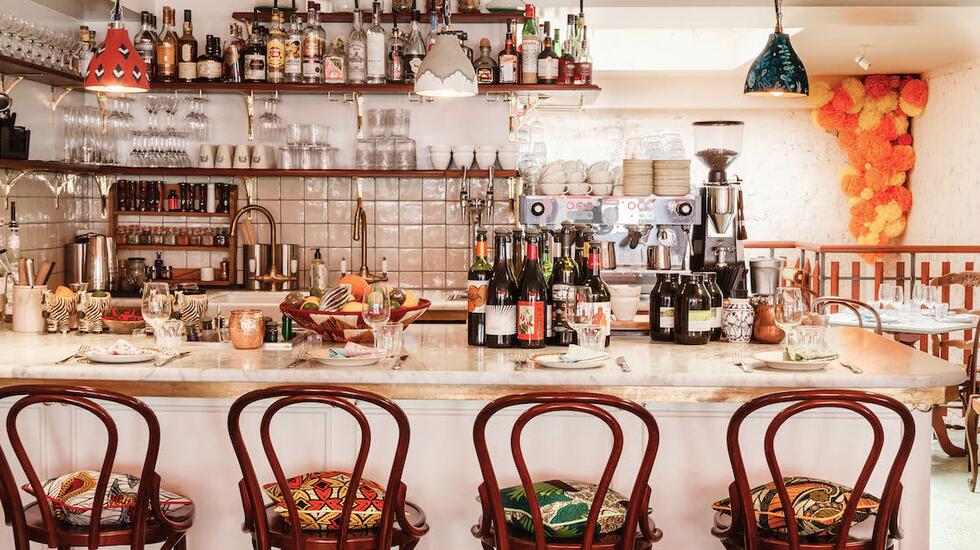 Breakfast Breakfast is the most important meal of the day - said every proper foodie to ever exist. But, while we've all listened to the science behind fuelling our body with the right ingredients, squeezing in the time to make a delicious creation that doesn't result in missing the train is no easy task - and frankly one we'd happily avoid participating in.

With that in mind, we've taken to London's streets to find the breakfast spots worth visiting. Some are better suited to pre-office outings; others make for a dazzling date destination, but all promise a top-notch menu. From a sun-drenched terrace in Chiswick to a Middle Eastern favourite in Bloomsbury, these are the places to make a beeline for.

Full English fry-ups and flaky pastries: where to kick-start your day

You'll be spoilt for choice at this Hackney hangout, thanks to its multiple dining spaces and varied menu. Located just a short stroll from London Fields and Broadway Market, Mare Street Market has a quirky attitude and welcoming vibe. We suggest booking a table in the Market Dining Room, where a loft-style set-up is decked out with sparkling chandeliers, overgrown potted plants and crumbling statues evocative of ancient Greek ruins - a room Holly Golighty would be only too willing to start the day in. Make it an all-day dining experience, grazing between the deli, pizza house and beer garden.

At some stage, we've all been served a bowl of gloopy, lumpy, bland porridge. Which is why we're so grateful to 26 Grains founder Alex Hely-Hutchinson. Having honed her craft in Copenhagen, where she immersed herself in the complicated process of pre-soaking grains, Hely-Hutchinson brought her secrets back to London, to her Old Street pop-up, before opening in Neal's Yard. At 26 Grains, you'll find layers of berries, seeds and oats served up amid cool, Scandi-style interiors. Start your day right with a bowl of the famous five-grain porridge, with spiced apple, butter, sesame and almond granola. Not quite on board with porridge yet? There are plenty of savoury sensations on offer, too, including a smoked salmon plate. You'll find a similar winning formula at Hely-Hutchinson's second restaurant, Stoney Street, in Borough Market.

Brought to us by Melanie Arnold and Margot Henderson, Rochelle Canteen has been serving the tastiest runny eggs and generously buttered sourdough toast in a former school courtyard since 2004. Housed in what was once the bike shed, the airy space acts as a hub for edgy creatives. Enjoy your grilled delights solo or round up the troops and enjoy an early-morning feast with the gang.

Proof that Marylebone has a strong brunch offering beyond ritzy Chiltern Street, Paddington Street's Opso is on hand for good vibes and great Greek grub. Work your way through the basket of freshly baked breads and pastries while waiting for your main squeeze - the dreamy apple-crumble French toast. Gorgeous, wood-finished interiors are the cherry on the top of our very berry pancakes.

Although there are now multiple outposts across town, Farm Girl's firstborn in Notting Hill remains our firm favourite. Weave your way through hanging plants, neon signs and faux-fur chairs to grab a table, before ordering a rose matcha tea and plate of the buckwheat berry pancakes. Bookings aren't taken, so you'll have to join the snaking queue of discerning foodies and yoga enthusiasts to taste the rewards. It's worth every minute, in our opinion.

At Chiswick's most photogenic breakfast spot, sofas come finished in pink-and-cherry velvet, cacti crowd every corner and aromatic coffee is served piping hot. Plonk yourself in a cosy booth and keep the breakfast brioche in your immediate eyeline. Party people should save their visit for the weekend, to make use of the secret garden sun terrace. Reminiscent of a beach club, it's the place to come for experiential mixology and banging burgers.

A menu that fuses East Africa and the Middle East with Asia? Sign us up, pronto. With its blush-pink facade, Jikoni could easily pass as an arts boutique: think glass-fronted windows framed by wicker chairs and patterned cushions. Inside, you'll find dark-wood chairs, vibrant tablecloths and walls clad in hand-painted illustrations. The menu speaks for itself, but if the pineapple-glazed bacon and sweetcorn pancakes are on, order at least three. Keen cook? The Jikoni cookbook is available to buy, presenting authentic recipes and stories from an immigrant kitchen.

Staying true to its Aussie roots, Milk Beach serves a sunny all-day brunch. We'd like to tell you to try something other than Granny Elly's banana bread (with espresso cream and a side of cheese), but truthfully there's no point deviating from something that never fails to hit the sweet spot. The decor? Architectural Digest fans are in for a treat: picture exposed floorboards, walnut-wood wishbone chairs, whitewashed walls and rattan pendant lights.

With its cutting-edge architecture, you'd be forgiven for assuming that this place is some sort of art installation, but step inside and you'll find a brilliant brunch menu. Crispin is the brainchild of friends Dom Hamdy and Oliver Hiam - better known as the guys behind Borough Market's Scotchtails stall and Aldywch's Lundenwic coffee shop. Swing by for plates of smoked salmon and burrata, perfectly poached eggs and a heavenly cinnamon panna cotta.

The Barbary Next Door

Looking for a new breakfast spot in the capital? We've got you covered.⁠ ⁠Tucked away in Neal's Yard, The Barbary Next Door takes its cues from Moorish Spain and North African cooking (and interiors), serving up a menu of spice-imbued morning dishes in a rustic, rosy-hued dining room. Start off with ras-el-hanout pumpkin bread slathered in a pumpkin and sunflower seed clotted cream, then dive straight into the unmissable four cheese bourekas and bus station eggs. Switch your classic cortado for a fresh mint tea - trust us, you won't miss the caffeine.

A weekend canalside ramble should always end at Towpath. Open from 9am, it's one of the capital's best-loved al fresco food spots. Check out the chalkboard specials, then tuck into the likes of fried eggs on toast and granola with yoghurt, fruit and maple syrup. Sip your coffee while watching the swans swim in concentric circles, then grab some flapjacks to-go for an afternoon treat.

Everyone knows that no breakfast banquet is complete without a good cup of joe, and we can think of no better place to grab ours than WatchHouse. Starting out in a 19th-century townhouse on Bermondsey Street, the coffee connoisseurs have since expanded across the capital, with 12 individually designed outposts spanning Covent Garden to Holborn. We're heading to the flagship outpost in Tower Bridge, partly for its soft industrial design, but largely so we can enjoy our breakfast on the river's edge.

Ask any New Yorker where to go for breakfast and they'll march you straight to the doors of Sunday in Brooklyn. Sitting pretty in the heart of Notting Hill, this is the first UK offshoot of one of America's best-loved foodie joints. That weekend date you've been planning? Sorted. Head down mid-morning and choose between one of the sun-soaked outdoor tables or a cosier indoor spot. Menu highlights include the cauliflower patty melt, grilled asparagus, maple-drizzled pancakes and jam brioche. If the honey bear on holiday cocktail is on the menu, order it - it's 5pm somewhere.