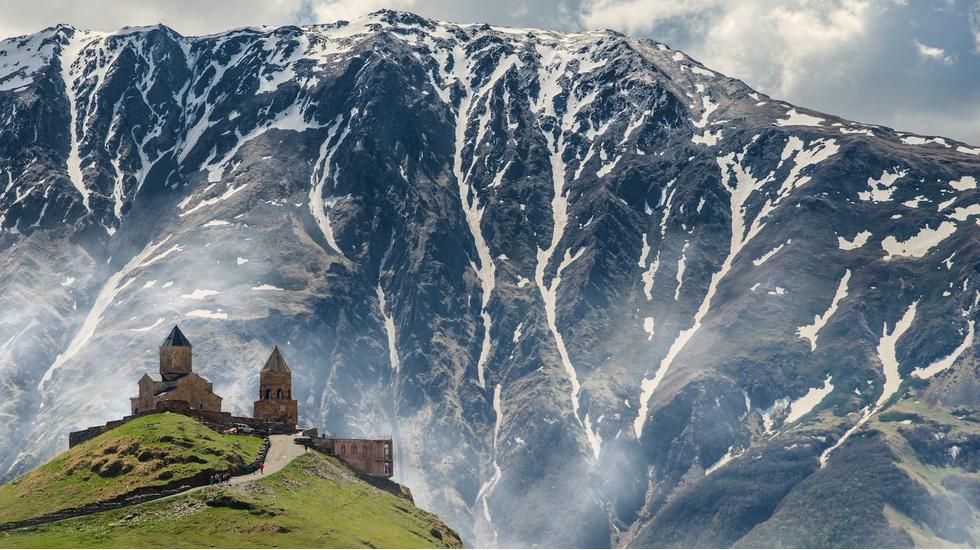 On the craggy slopes of the Great Caucasus Mountain Range, Stepantsminda is a small valley town steeped in ancient history. Commonly referred to as Kazbegi, the town is perched in the shadow of Mount Kazbek - known in Greek mythology as the place where Prometheus was chained as punishment for teaching mankind how to make fire.

Travellers use the town as a base for ice climbing, hiking and mountaineering, while the hot springs and alkaline lakes surrounding the cliffs beckon weary limbs. Spend mornings admiring medieval watchtowers and the 14th-century Gergeti Trinity Church before heading into the valleys for long walks exploring the region.

Hikers should head to the Dariali Gorge and trek the Devdoraki Glacier, passing the Gveleti Waterfall en route. History lovers, meanwhile, should make a trip to Upper Truso Gorge, where abandoned villages, ancient forests and glaciers pepper the landscape.

A wildlife fanatic. Keep an eye out for snakes as you hike around the Gveleti Waterfall (Gveleti translates as "place of snakes"). Keen twitchers should head into the steep valleys where eagles, hawks and griffon vultures nest and swoop among the branches.

Go in the summer months for blue skies punctured by snow-capped mountains. September is the ideal time to miss crowds but still make the most of the weather.

Base yourself at Rooms Hotel Kazbegi, where discrete geometric design places emphasis on views across the valleys.

This De Mamiel Winter Facial Oil uses the fatty acids from arctic cranberry seed and sea buckthorn along with a delicate alpine lavender fragrance to restore vitality and protect your skin from cold weather.

Fly into Tbilisi International Airport, from which transfers to Stepantsminda take between three and four hours by car.