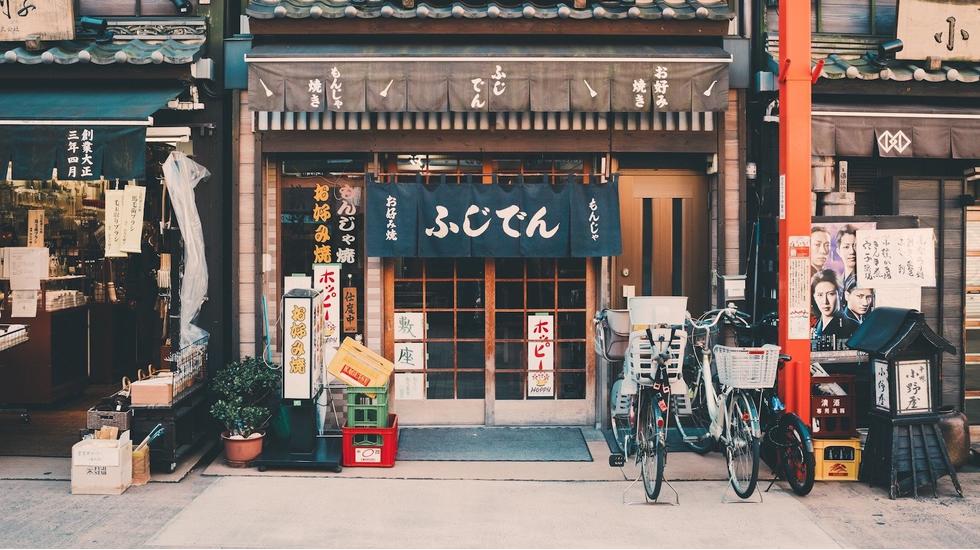 When When the pink hill first comes into sight, my bike rounding a corner to reveal a huge mound of cerise bushes ahead, it's a surreal sight. Like something from a fantasy film set, complete with several tourists amiably wandering around with dogs dressed up in hats and bow ties.

As I begin to scale the path cut through the rosy bushes, I begin humming "think pink!" under my breath, reminded of the delicious song from Audrey Hepburn's film Funny Face, celebrating all things bubblegum pink and magenta.

I'm in the Hitachi Seaside Park; a huge, sprawling stretch of space that feels a little like a much prettier, very Japanese Center Parcs. A place where bright banks of flowers - including these Kochia bushes, which are replanted every year and slowly blush into vibrant colour over autumn - are interspersed between Ferris wheels, pebble gardens, gaudy fairground rides and cafés where one can stop off for a coffee after a spot of cycling.

Two days into being in Japan and the ability to swoop around corners at speed, legs pumping, is proving welcome.

I'm here to experience a new-ish tourist trail known as The Diamond Route. Taking in three prefectures north of Tokyo - Ibaraki, Fukushima and Tochigi - the route offers up a delectable array of sights, experiences and culinary possibilities outside of the more established tourist destinations like Kyoto or Osaka.

It's an old passage to tread, dating back to the Edo period, when merchants and nobles would use the Osho Kaidu route to allow safe movement between cities. These historic precedents are still visible today, from old Samurai schools to religious shrines and traditional ryokan accommodation.

The day began early. Pre-gleeful cycling, I was up at 5am thanks to jetlag, catching another dazzling array of pinks from my balcony at Oarai Hotel as the sun rose over the sea, painting the sky salmon.

Visitors are encouraged to venture out to see the Isosaki Shrine torii gate if they're up at dawn, but I made the rather more lazy decision to take a bath. It's number one of two that day, given that our Diamond Route trail is peppered with lots of good options for hot water.

After the Hitachi Seaside's technicolour sights it's on to Sake+Soba Nakaya to sample some of the region's local specialities, including locally brewed Hitachino Nest Beer, followed by a stay at Nakamuraya Ryokan, a place known for its extensive spa options thanks to its location in Iiazaka Onsen. The ryokan has been operating for 120 years and in the hands of the same family for the last 80.

The town, which is one of the oldest spring sources in Japan, boasts nine public baths, one of which we visit that evening. It's a soothing experience - the slight smell of sulphur, the wonderful lack of self-consciousness found among bathers all ages, from giggling young friends to elderly women hosing themselves down after a good long soak.

Between the elaborate home-cooked dinner in our Ryokan, complete with plum wine (another local speciality) and all the bathing, by the time my head hits the pillow - on the floor, beds here being traditional futons on Tatami mats - I'm immediately ready to drift off.

The next day we head slightly off-piste in the direction of Matsushima Bay in Miyagi, where we visit the small waterside Godaido Temple and vast, tree-flanked Entsuin Temple.

This area was badly hit in 2011's tsunami, something we're acutely reminded of when visiting the Ishinomaki Lab in the afternoon, a local business set up in the wake of tsunami to provide DIY skills and easily assembled furniture to those who'd lost everything, as well as designs and materials for public spaces. Now they specialise in beautiful, functional designs that are sold worldwide.

On the way there we stop off at Enman-Tei for lunch. A much-loved ramen shop, the original premises were also destroyed in the tsunami. Now, though, it's thriving once again.

I order the special - seafood ramen. A vast, steaming bowl brimming with shrimp, scallops, clams and an intact, gigantic crab. The crab stares up at me from the bowl, legs elegantly arranged over the side like it might scuttle out, and I stare down at it.

I am mesmerised. I am excited. I am hungry. I am very quickly becoming aware that I have absolutely no idea how to go about eating this. Luckily I am saved from my own shellfish ineptitude by the co-owner, who emerges to patiently dismantle this imposing creature bit by bit. It's delicious.

The next day is given over to high-altitude exploration. First stop: Bandaisan Goshikinuma Lakes. In 1888 the eruption of the nearby Mount Bandai forever altered the mineral make up of these lakes, rendering them a dense turquoise.

Snow-dusted peaks hover beyond the impossibly vivid waters. And peaks are exactly where we're headed afterwards, hopping onto the Grandeco Ropeway to weave our way up into the mountains.

It's enthralling - that first moment of careering out and up the side of a mountain in a small, glass bubble, trees endlessly falling away beneath our feet. In winter this is a ski resort, the whole scene transformed into a snowy wonderland. But for now the leaves are just starting to turn auburn.

At the top, the views are unsurprisingly spectacular - plenty of further craggy peaks sprawling out into the distance, each a slightly different gradation of dark, almost inky blue. Up here it is cold, crisp, and quiet; just the sounds of voices, rustling leaves and the smooth whir of cable cars coming and going in an endless loop.

After the peaks, more water. At the Urubandai Lake Resort Hotel we visit perhaps my favourite onsen of the week; a secluded outdoor space where steam rises gently from the water, the view ahead one of pewter lake and gold-dappled trees.

It's not quite as spectacular sight as Lake Inawashiro though, which claims the title of fourth-largest lake in Japan (every sight and destination here comes with a clear set of rankings, whether it's the height of a statue or the age of a building).

Docked to one side there sits a magnificent swan boat complete with crown, serene, implacable and faintly dreamlike as the sun begins to set behind it.

By evening I'm up to my shoulders in warm water again, on the balcony of Shousuke no Yado, Takinoyu, where my private outdoor bath is situated on a balcony overlooking a roaring waterfall. Appropriately, I'm reading Flights by Olga Tokarczuk - a steady companion for a week on the move.

Over the next two days this place becomes our base for a series of explorations, from the Samurai School Nisshinkan - a former training academy for young samurai soldiers, detailing the historic (not to mention rigorous) education system for young students, while also allowing us amateurs a chance at trying out some archery - to the Iiamoriyama Memorials, set up to remember a group of young samurai who allegedly died by ritual suicide on a hillside, thinking that a battle they were participants in had been lost.

We also visit Ouchijuku, a former post town that once functioned as a stop off-point for travellers passing back and forth between the north and Tokyo (or Edo, as it was then known).

Now, the long, straight street of thatched-roof buildings have been transformed into a number of shops where you can buy anything from food to flutes to ceramics to yukata to kitsch knitted vegetables. Clear plastic bags of fruit look almost jewelled in the light, while the brook on either side of the walkway is punctuated with bright crates of bottles, the contents kept cool in the flow of water.

Our final day takes us towards Nikko, Tochigi, in the direction of the Kanmangafuchi Abyss. A picturesque gorge full of tumbling rocks and even more tumbling water, the main sight here are the 70 or so Jizo statues (a deity known as the protector of travellers, as well as women, children, and the deceased), each clad in a red cap and bib. Of varying sizes, these mossy lines of figures stare out solemnly over the path, ever-watchful.

Afterwards, we wander around the Nikko Toshogo shrine. An ornate set of buildings forming the final resting place of Tokugawa Ieyasu, who founded the Tokugawa Shogunate (who ruled Japan for approximately 250 years until the mid-19th century. Everywhere there's a preponderance of gold leaf, as well as elaborate carvings of birds and other, more fantastical, creatures.

Like many shrines in Japan, here Buddhist and Shinto iconography intermingle, with elements of the two faiths sitting side by side.

It's a rather grand ending to the week - one that's much more touristy than many of the destinations we've experienced, all queues and cameras. It makes me realise how much I've appreciated the quieter spaces we've seen.

As we round our way back towards Tokyo for a final sleep, my head is full of blue skies and green woods and gold walls and thick, pink banks of flowers and low white buildings with mountains behind.

It's been a swooping tour of history and faith and food - never before in my life have I so greedily filled myself with sashimi - and one that's left me hungry for more.