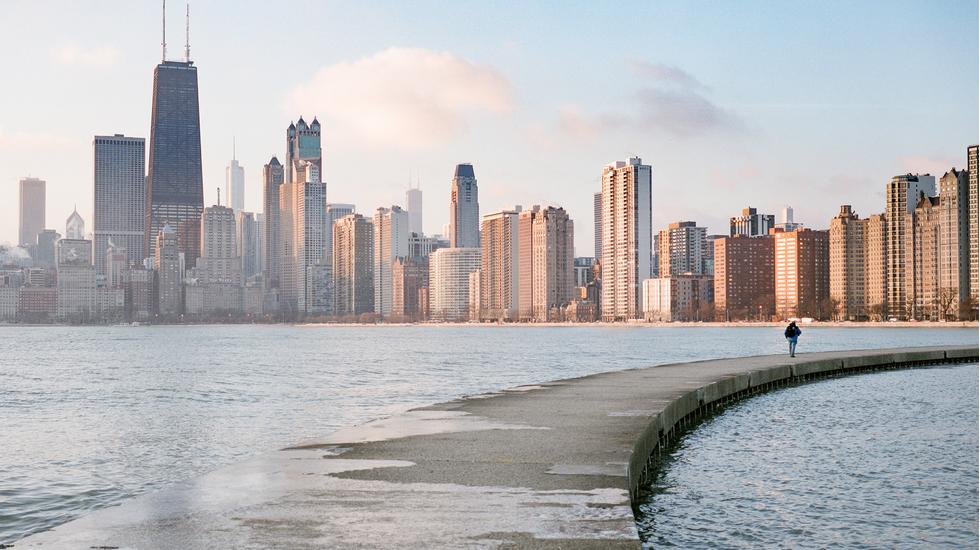 The The blue hue of the pre-dawn light reflected in the windows of the wintry skyline as I parked in downtown Chicago. Hesitant to leave the warmth of the car for a cold day of photography, I grabbed my camera, extra rolls of film, and a tripod I slung over my shoulder like a frozen log.

A few minutes into the journey, I could already feel icicles forming in my beard. The route was quiet at first. Only a few souls, wrapped in nylon and polyester like colourful burritos, occupied the bus stops and parks. Yet despite the frigid weather, it wasn't long before the city was bursting with life.

As the sun swelled in the sky, droves of people shuffled from commuter stations and blurred as they hurried over bridges and traversed the avenues. The "L" trains spread like branches through the streets as they screeched above crowds on viaducts so rusty you could almost taste the iron on your tongue.

Every block felt like its own short story. In the alley to my left, a ray of light slashed diagonally across a brick wall, fracturing into dozens more as it passed through a fire escape and blinded the passers-by on the pavement below. Another block up, hotel guests sauntered in and out of pools of sunlight, their breath hanging in the air as they dragged fancy luggage behind salt-encrusted boots.

Regardless of the neighbourhood, everyone I passed that day seemed immune to the cold. Sure, maybe some grew irritated by it, but Chicago is undoubtedly a tough city with a particularly hardy breed of people. Later that night as I returned to the comfort of my vehicle, it was clear the magic and beauty of this frozen metropolis hadn't disappeared just because the warmth of the summer had.