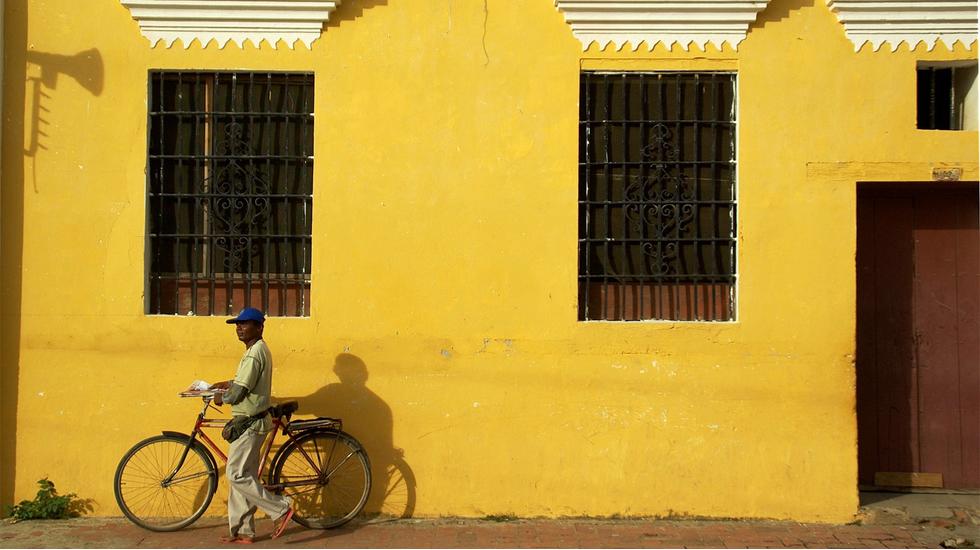 Gabriel García Márquez in The General in his Labyrinth

Five Five hours into our journey, I'm beginning to have doubts myself. It's the Wednesday of Holy Week, or Semana Santa, and my friend and I have decided to leave the ever-so-pleasant town of Santa Marta on Colombia's Caribbean coast for a large area of wetland 300km south that contains Mompós (also spelled Mompox), an otherwise sleepy colonial town renowned for the exuberance of its Easter celebrations.

But getting there is difficult. At around 5PM we had clambered optimistically into our air-conditioned collettivo mini-bus, but it was an hour later before we left Santa Marta, the bus becoming impossibly full as we picked up locals travelling to see family for Easter - among them a mother with a newborn baby; from another house a nighty-clad 90-year-old woman, bundled in with a pink-edged lime-green towel for a blanket and a stoical attitude to the radio's aggressively loud jingles and over-zealous DJ.

As the sun dipped, we left behind the mountains of the Sierra Nevada de Santa Marta and turned off the main road, passing through villages with names like El Dificíl, while our driver steered with one hand, the other clamped to his ear as he chatted on his phone.

Now, five hours since Santa Marta, we've stopped outside a thatched house in a rural village. This is not Mompós. Those of us hoping to get there, it turns out, are to be decanted into the sticky night and a beaten-up Ford with an equally decrepit driver, Santiago, who has a growl for a voice and who seems, like us, not to know where we're going - or whether Mompós really exists.

I am rammed against the front passenger door by a large man who squeezes himself between the driver and me, and who apparently has no choice but to put his arm around my shoulders. But as we set off into the darkness, the car creaking over the potholes and under our weight, I find I'm increasingly thankful for the presence of my sizeable neighbour, as he acts as a guide to our lost driver.

After a while we hit a newly made but unfinished road. A frog jumps, cartoon-like, across the beam of our headlights. Santiago makes frequent and sudden swerves to the road's edge, where, as I try not to notice, there are great ditches ready to swallow us up. Without warning the road runs out and down to the swampy Magdalena River, which we cross on a rudimentary platform nudged across the dark water by a motorized canoe. Somehow our car makes it up the steep bank on the other side, and after following the course of the river, we find signs of life that signal Mompós: women cooling off in rocking chairs outside houses painted, confusingly, with 'Feliz Navidad' and images of Santa and sleighs.

We sleep at La Casa Amarilla, and the following morning a local guide awaits us, unrequested, in the hotel entrance. His name is Leonardo Fidel Nieto Carvajal, and he takes us out into the already baking heat to see the Baroque confection that is Santa Barbara - one of the town's six churches. From the top of the octagonal Moorish bell tower we look out over a sea of old terracotta-tiled roofs, bounded by the slow-flowing Magdalena. It was this body of water, linking the Andean interior with the Caribbean coast, which made and unmade the town's fortune.

Established in 1537 by Don Alonso de Heredia, the brother of Cartagena's founder, Mompós became a thriving centre of commerce. In 1810, it was the first town in the country to declare independence from Spain, and provided the Venezuelan liberator Simón Bólivar with an army. On a plinth in the leafy Plaza del Libertad are Bólivar's words: "To Caracas I owe my life but to Mompós I owe my glory". But during the same century the town was decimated by cholera, and when the river's main channel silted up and changed its course, the once glorious town became a backwater, cut off and forgotten.

Leonardo takes us into one of its old colonial mansions, now inhabited by several families and in a neglected state. Hens scratch in the courtyard while a boy plays balero with an improvised stick and string, his bare feet skittering along grand old tiles that still have a sheen from the polish and wear of several centuries. Mompós is sometimes cited as inspiration for Macondo, the forgotten town in One Hundred Years of Solitude; but there are much closer parallels with the town in Chronicle of a Death Foretold, which is set on a mangrove-edged, silted river that's clearly this part of the Magdalena, which García Márquez knew well.

As in that novella, the town while we're here is busying itself with a great event. Another colonial house, this one well preserved and on the grand Portales de La Marquesa, belongs to the Cabrales family, and as we pass they're assembling the main float, now stabled in their huge entrance, for tomorrow's Good Friday procession. Further along the street, a Roman soldier disappears round the corner. Other costumed figures hurry after him, carrying velvet pennants embroidered in gold. In the church of San Francisco, flowers are pulled dripping out of buckets to adorn the floats being prepared there for this evening's procession. At intervals, trumpets are sounded by men in purple robes tied with a white cord of five pompoms - one for each of Christ's five wounds. These are the Nazarenes, a Semana Santa role passed from father to son in Mompós.

As six o'clock approaches, white-shirted men with trombones slung over their shoulders gather in the square. Other Momposinos bring out wooden chairs and cups of coffee, settling in to watch the imminent spectacle. Colombian tourists eat fluorescent-coloured ice cream in fluorescent-coloured cones, and children ride on their parents' shoulders clutching balloons.

As the orchestra starts up, the procession begins its slow progress through the square. Teenage Nazarenes come first, carrying the lighter floats. Bubbles blown by onlookers hover above their heads like halos. A woman burning incense is shooed away by the marshals. As the sky turns lilac and dusk falls, lanterns illuminate the faces of the painted wooden models on the larger floats, which represent scenes leading up to the crucifixion. In one of them, helmeted Roman soldiers flagellate a prostrate Jesus, whose suffering is mirrored in the grimaces of the Mompós men carrying this heavy scene, sweat pouring down their faces. For a few seconds they smile gratefully as women flutter white-lace fans at them. The band may be shrill, and the floats gaudy, but it's a solemn and moving spectacle. The ultimate chronicle of a death foretold.

As the procession moves on through the town, we abandon the crowds for cold beer and rocking chairs on the Plaza de la Concepción, under an arch of the elegant but dilapidated old market. Bats swoop, strains of classical music play from the bar, and the moon rises over the murky waters of the Magdalena. Magical realism? Resurrection? In this setting, I'm ready to believe anything.