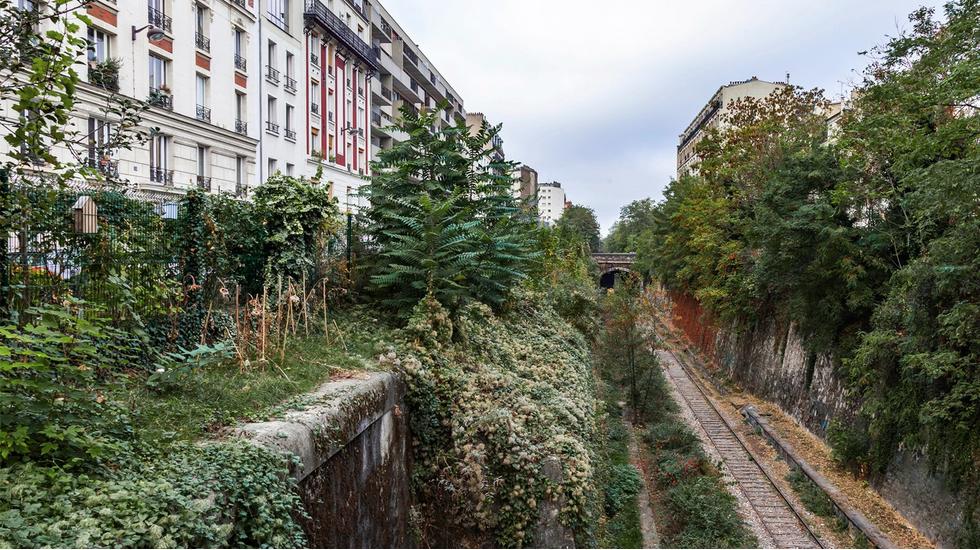 Montmartre? Been there. Eiffel Tower? Done that. Champs-Élysées? Next please. There's much more to Paris than its tourist attractions. Navigating the former La Petite Ceinture railway line illuminates a different side of the City of Light.

If you've visited Paris before, the chances are that you've already taken a picture in front of the Eiffel Tower, seen the Louvre, walked down the Champs-Élysées, looked up at the gargoyles of Notre Dame and gazed across the city from the hill of Montmatre. You've likely checked off all the essential tourist hubs and now you want to get a sense of the real Paris.

Far from the tour buses that run through Place de la Concorde and the groups taking selfies on Île de la Cité, the outskirts of Paris are home to cultural charms that are worth every minute of the metro ride. Or, if you're up for it, a journey along a different set of tracks.

The defunct 19th-century railway La Petite Ceinture once encircled Paris, linking the city's margins. Meaning "the little belt" in English, the 19-mile line was constructed between 1851 and 1867, but fell into disuse in the 1930s, after which its walls were tagged with graffiti and rare plants and animals moved into the abandoned space. Today, the city is working to repurpose La Petite Ceinture as a biodiverse pathway across the capital.

The railway's first refurbished section, located in the high-end 16th arrondissement, was opened to pedestrians in 2007. It's at this most western edge of the city that visitors will also find the sprawling Bois de Boulogne, home to the Longchamp Racetrack, the Fondation Louis Vuitton and the Jardin d'Acclimatation. On the park's border, the Musée Marmottan Monet was once the hunting lodge of the Duc de Valmy, and now houses the world's foremost collection of Claude Monet paintings - the painter's second son, Michel Monet, bequeathed his entire collection to the museum in 1966.

In the adjacent 15th arrondissement, a one-mile stretch of La Petite Ceinture is also open to the public. Beginning at Rue Olivier de Serres, the tracks run up against Parc André Citroën. On the other side of the park sits La Javelle, a popular hangout and open-air concert space on the western bank of the Seine.

Follow La Petite Ceinture farther southeast to the 13th arrondissement, and you'll find a reconstructed part of the railway that connects the Jardin Charles Trenet to Le Jardin du Moulin de la Pointe. This neighbourhood is known as the Chinatown of Paris - the Quartier Asiatique - and showcases an eclectic mix of newly constructed high-rises and traditional Haussmann-style architecture. With Chinese grocery stores, restaurants and businesses, the atmosphere here is unlike anywhere else in the rest of the city. When exploring, make sure to visit Pâtisserie de Choisy, a traditional Chinese bakery with French flair, and Restaurant Raviolis Chinois - its house-made "raviolis" (dumplings) are a must-try.

In the neighbouring 12th arrondissement, La Petite Ceinture becomes raised above ground level, similar to The Highline in New York City, offering expansive views of the surrounding quartier. A small park with community gardens has been constructed around the tracks and merges into Square Charles-Péguy. Look out across the Bois de Vincennes, Paris's largest park which stretches almost 2,500 acres and encapsulates the Parc Floral de Paris and the Parc Zoologique de Paris.

From here, La Petite Ceinture cuts through a large park that runs up to the border of the 19th arrondissement and right across the Villette Canal, where one of the most unusual bookshops in Paris can be found floating in the water. Anchored towards the canal's middle section, L'Eau et les Rêves stocks a collection of marine-inspired literature, fiction, nonfiction and guidebooks in an old barge. Browse its titles before taking a break in its indoor-outdoor café.

If you trace the tracks of La Petite Ceinture all the way to the 18th arrondissement, you'll not only come across other rehabilitated sections of railway, but also refurbished train stations, such as Le Hasard Ludique. Originally the Gare Saint-Ouen, the building was a train station from 1863 until 1934. It has gone through several reincarnations since then, and is now a restaurant, concert venue and arts space. During autumn, spring and summer months, the tracks here are open to the public; dine along the rails or peruse the murals and graffiti art that have come to define the line. Farther down the road, housed in another abandoned station, is La REcyclerie, a hipster eatery dedicated to "upcycling" - in addition to its café and bar space, it offers educational classes, talks and film screenings.

This leads us to Paris's famed Boulevard Péripherique, the road that marks the city's borders. Cross it at Porte de Clignancourt and you'll come upon the Marché aux Puces de Saint Ouen, the largest flea market in Paris. This sprawling mishmash of open-air and covered shops has been drawing antiques collectors for centuries. It's ideal for picking up one-of-a-kind mementos, window shopping or people-watching.

The most rewarding part of playing flâneur, is that you never quite know what you might come across along Paris's labyrinthine streets. It could be a rare book from a bouquiniste (bookstall), the spotting of a particularly chic Parisienne or perhaps stumbling upon one of only four Wallace drinking fountains in the entire city that aren't painted green. It's what makes Paris endlessly enthralling to its residents, and what makes all visitors fall in love: the prospect of wonder.