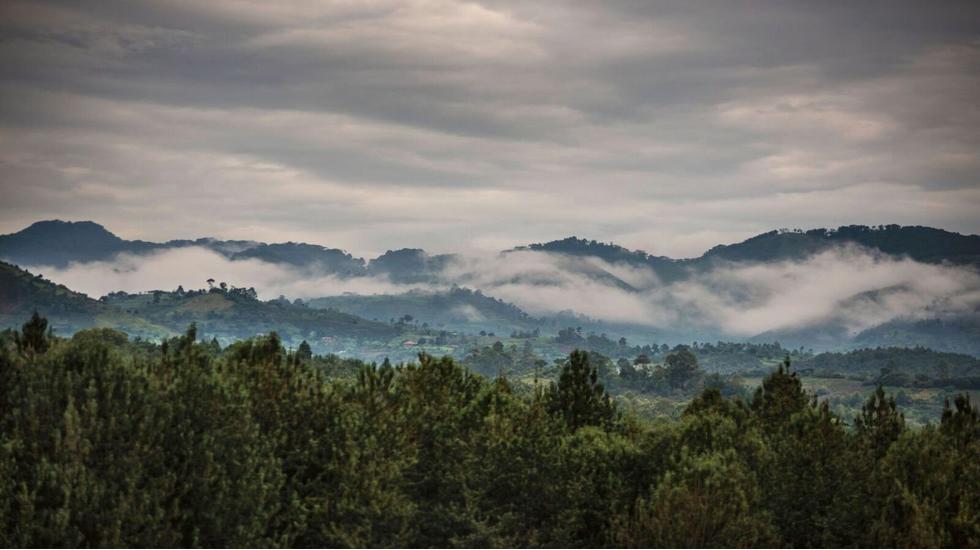 I I am balancing on a springy tangle of thick undergrowth while a cloud of mosquitoes hovers hungrily. The elusive mountain gorilla that my group has been tracking tumbles expertly down the slope and stops right in front of me. Idly he leans back against a tree trunk and his deep brown eyes, compassionate and intelligent, lock unblinkingly with mine. Never did I think that I'd have a staring match with a mountain gorilla.

This adventure started in Rwanda's meticulously maintained capital, Kigali. On arrival my guide, Yassin, a patient man with a broad knowledge of the local wildlife, met me with a vintage Land Rover that was going to be my mode of transport for the upcoming days. As we rattled rhythmically along, the landscape transformed from the urban sprawl of low-slung houses into endless rolling greenery. I waved back at the excited young children gathered in groups on the dusty sidelines, with their wide smiles and curious eyes.

I was on my way to Virunga Lodge, one of four luxury camps that make up Volcanoes Safaris. Founded 20 years ago by a conservationist and businessman called Praveen Moman, the company was the first to introduce gorilla tourism into these fragile post-conflict regions. The aim was to promote conservation and to improve the welfare of local people through employment opportunities and community-based initiatives. Along with wanting to witness the mountain gorilla in its natural habitat, I was keen to see how Moman's efforts had played out.

I leaned back in my seat, the crisp fragrance of fresh rain wafting through the open windows, and continued my journey northwards. By now the curving road had narrowed into a slither of a dirt track that snaked along the edge of a precipice. The deep valley below was overshadowed by the mountain opposite, its peak illuminated by the late afternoon sun that had begun to emerge from the dispersing clouds.

Perched on a ridge, Virunga Lodge has ten bandas, or houses, each with a cinematic outlook - either of the looming Virunga volcanoes or of the scenic Bulera and Ruhondo lakes. Their glassy surfaces reflected the rainbow that appeared, like magic, for my arrival.

Later, over a warming goat stew in the main house, I chatted to Moman. Born in Uganda, where his family were part of the pioneering Asian community that initially arrived in the country through the British administration, he moved to the UK as a refugee during the Amin expulsion. In the early 1990s he returned to his home country, with "a partly romantic vision based on childhood memories", to set up the safari company.

I asked Moman how gorilla conservation sustains the livelihood of the locals, and his eyes lit up. "To me, it is quite simple. Sensitively controlled tourism is essential for the protection of gorillas," he said. "Conservation efforts alone do not pay - especially in African countries where you have oil and minerals to make money from - but using tourism to connect to the local communities creates an income and a livelihood for them. Without that you won't get any support for conservation." As a result, all the Volcanoes Safaris lodges are not only managed by locals, they also all run their own community projects ranging from simple educational dance groups to vocational initiatives that equip the locals to make a living.

The next morning, in anticipation of my gorilla experience, I rose before my 5AM wake-up call and scrambled up in the dark underneath my mosquito net. As I left my room, the air chilly and slightly damp against my skin, the horizon was starting to radiate a hazy pink. A soft glow was cast over the landscape, creating a dreamy setting for my adventure into Volcanoes National Park - the home of the mountain gorillas.

Located on the northwestern edge of Rwanda, the park is a 60 square-mile expanse of dense rainforest and overgrown bamboo - part of a wider tangle of thick jungle that spreads west over the border to the Democratic Republic of Congo and north to Uganda. This region is home to half of the gorilla population, with the rest located deep within the Bwindi Impenetrable Forest in southwestern Uganda. The Rwandan zone is the territory for 30 gorilla families. Ten are tracked for tourism purposes, and the rest for research. Every day eight people are allowed to spend one fleeting hour with a family, and the length of your trek will always be dependent on the gorillas' location.

As it turned out, the Isabukuru family was under two miles away, but as we entered the rainforest it soon became apparent that reaching them would take some time. The trees were high and densely packed. Some had ancient trunks plaited into great sinews that plunged into a ground so muddy that it became exhausting to navigate.

After some time trudging uphill through glutinous sludge, our convoy slowed down. The group's chatter became hushed, the silence absolute. Beck, our guide, waved us over, leading us through the trees to a clearing. Unsure of what to expect, I glanced around nervously before I saw a flicker of black fur through a tangle of bushes and a gorilla, baby in tow, ambled out and settled down a few metres in front of me. Not the largest of the species, her sheer hulk was still frightening. I watched her fingers, so much like our own, dexterously tear bamboo leaves off a tree, all the while keeping a watchful eye over her inquisitive child. "Baby gorillas are like our human kids," whispered Beck, who was standing next to me. "They are curious and will try and touch you. It's okay if they do - just stand still and don't touch them back."

Before I could consider this thought the bushes started rustling again, and in a flash the entire family appeared in front of me, youngsters swinging from branches above our heads, others lazily munching on bamboo leaves, while the brawny silverback - the dominant male in the group - sauntered over and idly reclined into a pile of foliage, scratching his belly as he yawned. These gorillas are far from tame, but they are accustomed to humans, which meant that we were able to openly observe them as they went about their business. As I watched on in silence I thought about Moman's words from the night before. Could it really be that my presence there, as a tourist, was supporting the gorillas' very existence?

The evidence seems to suggest that this is correct. Moman's project has helped to significantly increase the gorilla population - from around 620 in the early 1990s, when conservation efforts first began, to about 880 today. It has also formed the basis of Rwanda's emerging tourism industry. The arrival of the luxury hotel brand One & Only, as well as the government's controversial overnight doubling in price of the gorilla permits to USD $1,500, are testament to this. The price hike was seen as an outrage at first, but as Moman explained: "With fewer than 100 permits a day, gorilla tourism has to be a high-value product. I am not against the rise in price because, as I keep saying, tourism is important for the conservation of gorillas, but it hasn't been done in the most appropriate way."

All too soon the golden hour passed and I began my descent, sliding treacherously downhill. A couple of hours later, dirty and happy, I climbed back into the Land Rover and began the drive to Uganda, already anticipating my next gorilla encounter in the Bwindi Impenetrable Forest.

Early the next morning, over porridge and fresh fruit, I chatted to Joselyne, the manager at Bwindi Lodge, who suggested that my upcoming encounter in the Impenetrable Forest would be different to the last. "The forest has that name for a reason," she laughed.

Indeed, I soon found the 128 square-mile Unesco World Heritage site to be as unyielding as its moniker suggests. The compact jungle vegetation was only navigable by way of machete-wielding guides, who expertly hacked at the dense shrubs and the wild twisting vines. This allowed only a glimpse of the gorillas as they moved around the undergrowth, shifting in and out of view. Far from the display that I received in Volcanoes National Park, this encounter brought home the truth that, habituated as the gorillas may be, they remain wild and elusive creatures. This is still their homeland, and I am a mere visitor, fortunate enough to be invited in.

The next day, as I travelled northwards through Uganda, along the border of the Democratic Republic of the Congo, I was struck by the diversity of the land, as the emerald-green mountains gradually flattened into the dry, grassy plains of Queen Elizabeth National Park. The air was dry and hot as we bumped along the crumbling roads, dodging deep potholes and passing herds of elephants flapping their ears.

Sticky and dusty, we slowed down at the eastern edge of the park, where the scenery had transformed, once again, to reveal the gaping drop of the Kyambura Gorge. This tropical ravine was home to a family of chimpanzees, whose frenzied, visceral shrills echoed down below. As the sinking sun turned the sky a vivid orange that slowly dissipated into puffs of pink and purple streaks, I contemplated everything that I had seen over the past few days. The mountain gorillas would almost certainly have been hunted to extinction were it not for pioneering conservationists like Moman. The proof, for these vulnerable creatures, is in their happily rising population. Without tourism, there would be no gorillas.

Spend seven nights in Uganda and Rwanda, staying at all four Volcanoes Safaris Lodges in Virunga, Gahinga, Bwindi and Kyambura from £5,590. Price includes permits to see chimpanzees and mountain gorillas as well as international flights on Rwanda Air from London Gatwick with africaodyssey.com.

Discover More
The Last Eden of Africa: A Journey through the Okavango Delta, Botswana
Read now