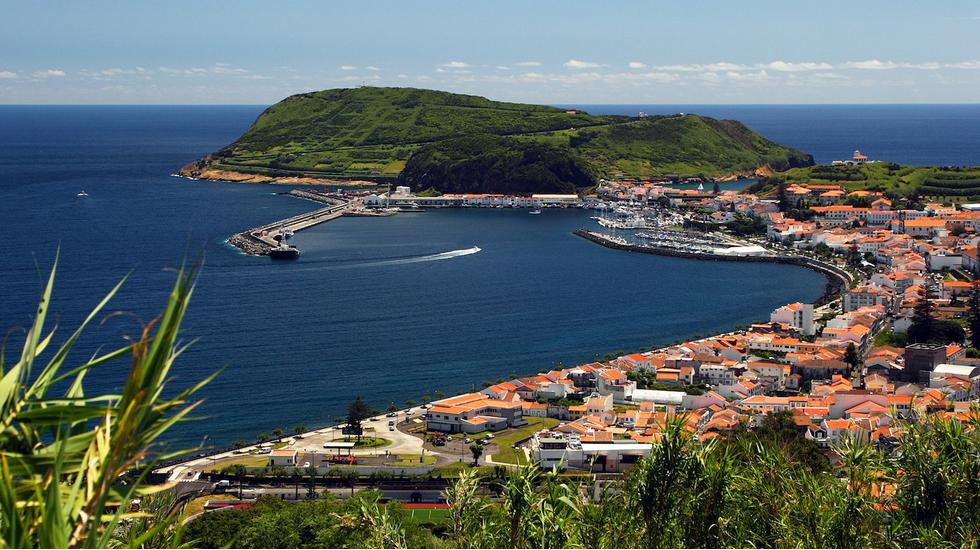 Once an oasis stumbled upon by seafaring adventurers and professional whalers but now popular among yacht owners around the world, nature is well and truly in charge on this small Atlantic island. It may be by-product of vigorous tectonic plate shifts but it isn't all black sand beaches and dusty vistas - you'll find plenty to entertain on this lesser-visited haven. Luscious vegetation blankets rolling hills, while an abundance of blue hydrangeas have earned it the nickname "ilha azul" (blue island). To the west, the eerie remnants of Faial's last active volcano, Capelinhos, loll out into the sea like a parched tongue, dramatically contrasting the rich colours that flourish around it. The lunar-esque terrain now lies like a graveyard, home only to a lighthouse which has been renovated and turned into a museum to mark the location's eruptive history.

The south-easterly tip is the island's cultural and commercial hub where you'll find the marina town of Horta. Minimalist houses appear as white dots in the lap of Faial's hilly jade vista, while a flotilla of yachts bob in the bay - boats flock here from all over the world to break up their Atlantic crossing, making it a hive of activity. In the last century the port walls have become an open-air gallery as superstitious sailors daub them with paint for good luck before embarking on a voyage.

With many whales and dolphins residing in this part of the world and a national park covering the majority of the island, Faial is one for outdoors types looking for something a bit different.

Faial is a year-round destination with largely stable temperatures thanks to seas warmed by the Gulf Stream, but locals say that you can experience four seasons in one day here, so pack layers just in case.

Anyone who thinks "geology rocks".

Yachties, nature lovers and locals looking to keep this place a secret.

Take a two-and-a-half-hour hike around the cavernous edge of Caldeira - an extinct volcano that formed the island itself - then unwind with a dip in a salt-water pool. At Varadouro Bay, fossilised lava has shaped a natural spa retreat in the middle of the Atlantic Ocean. Unlike Iceland's Blue Lagoon, Faial's thermal pools are still largely undiscovered by tourists; spend an afternoon bathing in cobalt waters which gleam against charcoal walls.

Walking shoes, a Portuguese phrase book and your paintbrushes to leave your mark on that wall.

Ryanair and Easyjet now fly direct to the Azores, so fly into Horta, hire a car and tour the utopian-like landscape at your leisure.