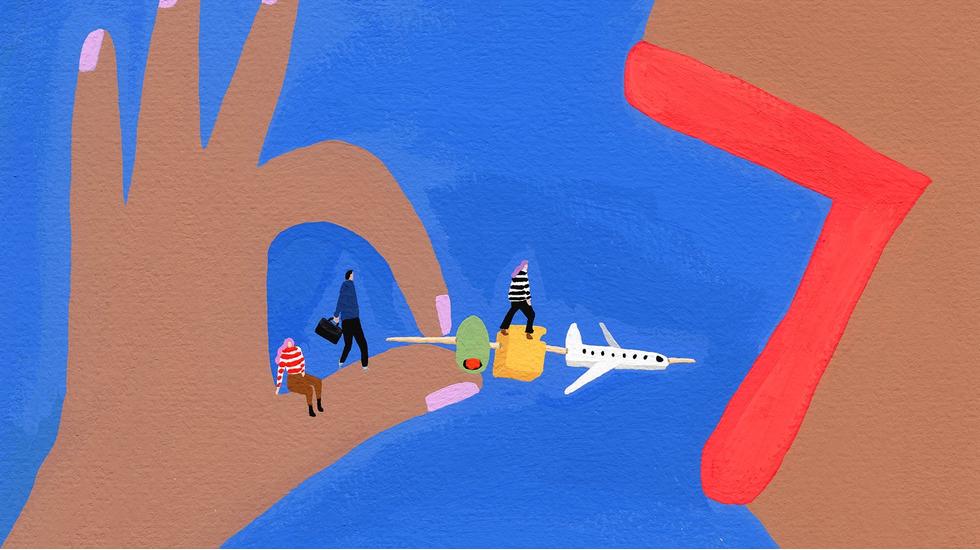 Plane food is well worth travelling for.

Said Said nobody ever. Not even in business class. Think of in-flight fare and images of pre-made, reheated foil trays of food and puffed-up packets of bread spring to mind. Choreographing elbows with our neighbours, we push around mystery meat, limp veg and a whole lot of beige drowning in a whole lot of sauce. What makes it into our mouth is hampered by the sky-high trinity of low cabin pressure, dry air and engine noise which, together, dulls our taste buds and sense of smell. Even the onboard hot water has a somewhat unsanitary backstory. Don't Google this while eating.

It's no wonder that there's a growing trend for passengers packing their own meals or eschewing food and instead fasting for the long haul. Airlines aren't blind to this, however. In 2010 Lufthansa commissioned a scientific study into the changing flavour profiles of food in flight, which led to an increased use of salt and sugar in its recipes, a reduction in acidity and the introduction of umami-rich ingredients - think soy sauce, sharp cheeses and tomatoes. Seven years later, Hong Kong carrier Cathay Pacific introduced Betsy Beer, a brew featuring honey and loganberries that is specifically designed to taste good at 35,000ft.

There's been a slew of airlines collaborating with big-name chefs in a bid to counter plane food's bad reputation, too. Gordon Ramsay consulted for Singapore Airlines, Joël Robuchon was hired by Air France and Heston Blumenthal helped British Airways with its menus as part of the Channel 4 documentary Heston's Mission Impossible.

But is it really so impossible? In a world where doctors can transplant faces and plans are being made for human settlement on Mars, it seems odd that airlines haven't evolved far past the squeaky- wheeled trolley in a bid to dish up some decent grub. Gaze into the future of aeroplane food, however, and the horizon is peppered with hopes of robotic galleys, automat-style ordering and innovative approaches towards making our food greener - literally and figuratively.

Among these is Singapore Airlines' freshly launched Farm to Plane initiative (currently being trialled on its lengthy Newark-to-Singapore route). Meat will make a less regular appearance on menus, instead being replaced by MSC- certified fish and produce from AeroFarms, a pesticide-free aeroponic operation which uses 95 per cent less water than traditional field-bound practices. Situated mere miles from Newark Liberty International Airport, its peppery rocket, heirloom tomatoes and the like make their journey from farm to airborne fork in the space of a few hours.

Inspired by these sky-high dining dreams, we asked four chefs to let their imaginations run riot and reinvent the in-flight meal. Practicalities do not apply.

A trailblazer in zero-waste gastronomy, the cookbook author and founder of Silo, a sustainable restaurant in Hackney Wick, offsets air miles with his eco-minded menu.

My dream plane meal would begin with a fig-leaf spillage if things get turbulent. Pickling is a great kombucha spritz. It's simple, light and refreshing way of using up imperfect veg; even at 30,000ft, the - plus, nervous fliers can add a large shot of gin.

The main course would follow the same ethos, as my restaurant Silo, which is guided by sustainability. In the sky, I'd let plants do the talking. A soba-noodle salad with pickled broccoli stem, cherry tomatoes and lovage would be dressed with tahini and served with a wedge of fresh lime. It's the ultimate, easy-to-eat in flight main - plus, there would be no spillage if things get turbulent. Pickling is a great way of using up imperfect veg; even at 30,000ft, the plane could be stocked with jars of the stuff.

My main would be served on a dish made from Shellworks - a bioplastic formed from upcycled shellfish bones - or, for vegan travellers, a plate made from pressed corn husks. These materials are a great way to reuse waste the would otherwise go in the bin. I'd end with a super-smooth blackcurrant ice cream finished with douglas-fir caramel.

My in-flight goals are to relax and snack, so my menu would be a parade of cannabis-infused bites as opposed to a four course affair. To get things off to a comfortable start, a tincture that combines CBD with a little THC (the psychoactive part of cannabis) would be dropped under then tongue.

Chips- freshly fried before take-off and tossed in a glaze of hash,honey and butter- would be served as the munchies kick in. It's Difficult to eat just one so the THC dose would be kept low. With bingeing territory dangerously close, I'd serve cannabis-leaf dolmas, a healthy snack filled with lemon-scented rice,herbs,currants and onions flecked with a little strains of the plant here; the leaves are slightly broader and make rolling the dolmas much easier.

Travellers would have consumed around 40mg of THC by this point, so a single-serve Calabrese style pizza would be kept plain.I'd wrap up the voyage with a combo of vanilla ice cream topped with expresso and a nip of my homemade pot-and-walnut liqueur.

Head Chef and founder of London Bridge's Native restaurant, Tisdall-Downes champions ingredients foraged at the point of departure with his take on the in- ight menu.

I'd kick off the meal with a glass of zero-alcohol sparkling wine. At Native, we serve the Träublein from Schloss Vaux in Germany - it's fermented in the bottle, like champagne, which gives it a soft, natural effervescence so you can have some bubbles without the headache when you disembark.

For a winter ight, I'd serve a pie containing venison from the South Downs National Park - pies e ectively come with edible packaging and, for those ying from Gatwick, the food miles accrued would be tiny. Mushrooms foraged at the port of departure - such as ceps or chanterelles - would be served with garlic butter. A big part of what we do at Native is using hyper-local ingredients; we believe that sourcing produce from within a few miles not only reduces the environmental impact of transportation, but very often means that flavours combine perfectly.

For dessert, I'd serve a light and chilled hay panna cotta. Alternatively, if you're looking for something to make you sleep for the rest of the ight, a chocolate-and-mushroom crémeux is rich, intense and sure to send you into a doze.

Ahead of the opening of his Mexican restaurant Kol in London in early 2020, the alumni of Noma Mexico injects theatrical air into his onboard dishes.

Ironically, my dream plane meal would be a dish that is traditionally cooked underground: cochinita pibil. Suckling pig is marinated with achiote chillies and sour oranges before being wrapped in banana leaves and slow-cooked in a pit, giving it a complex smoky avour - it's a long process, but one that's hands-off.
Individual portions could be wrapped in banana leaves for reheating in ight, before being served with chard-habanero salsa (extra spicy; altitude numbs the senses), a nutritious herb salad featuring succulents such as portulaca, and panuchos, which are refried tortillas - making them fresh in the cabin kitchen would be near impossible.
Mains cleared, a dessert trolley with a at, frozen top would snake down the aisle, on which ight attendants would pour a bright-yellow jackfruit- and-mango juice, creating a sorbet as the liquid crystallises on the surface. Finish that with a touch of mezcal and pinch of sea salt, and you have my dream in-flight meal.