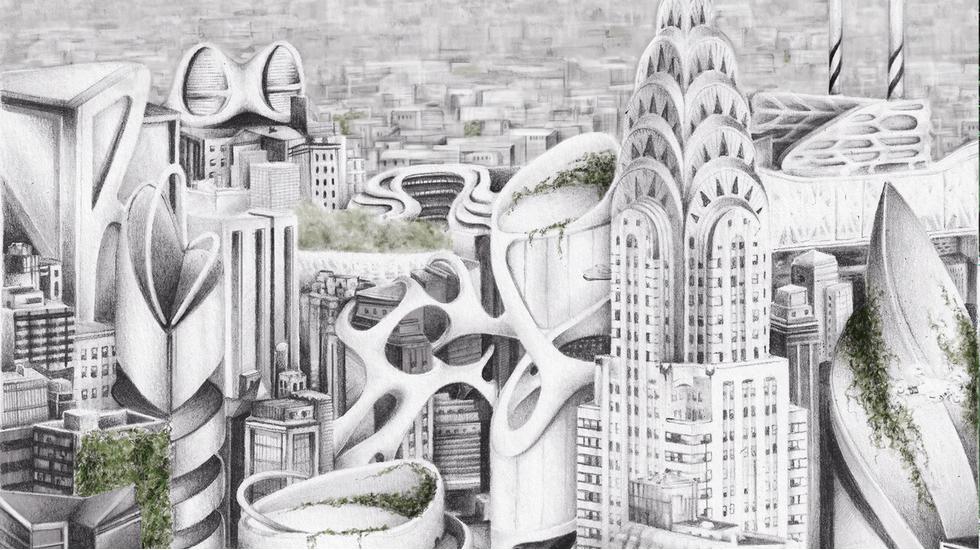 What will the city break of the future look like? Using today's emerging technologies as a starting point, and contra to the dystopian doom-mongering that often accompanies our visions of the future, we imagine how our holidays might unfurl a decade from now in a fantastical, optimistic missive from the New York of 2029.

Looking Looking back to 2019, Google's then-director of engineering, Ray Kurzweil, predicted that nanobots would inhabit our bodies by now - that we would be able to upload our brains onto the cloud as microscopic robots flowed through our arteries. While many of the predictions the "Nostradamus of tech" made in his 1999 book The Age of Spiritual Machines had become a reality by the end of the 2010s, a decade on in 2029 we're still waiting for paper books to become obsolete, such is the human race's ongoing desire to remain connected to physicality. And nanobots inhabiting our bodies? Thankfully still a thing of science fiction novels.

Even if scientists and technologists have taken us to a point where we can conceive such an extreme level of human integration with technology, increased resistance against the Silicon Valley elite continues to keep such uneasy fantasies at bay. In 2029 we have - after a discordant decade of divisive politics and technological evolution that frequently spiralled beyond laws, legislations and morality - arrived at an epoch where humankind and technology are at last co-existing in some kind of harmony. With just a few months left of the period that has come to be known as the "turbulent twenties", I decided to travel to New York City to assess how technological advancements that were in their infancy at the turn of the decade have today transformed the humble city break beyond all recognition.

One area Kurzweil predicted with alarming accuracy was that of artificial intelligence. As several robot rights cases rage on, it's hard to remember a time before civilisation's relationship with our synthetic companions flourished. Yes, we still look down at their level of "humanlike intelligence", but as I arrive at departures to check in the single permitted piece of luggage that Siri advised me to pack last night, I'm glad I gave up arguing. As much as you might not like to admit it, they always know best. They may still struggle with British humour, but they also have in-built connections to airline data systems, deeply analytical knowledge of every item of clothing in our wardrobes, a better understanding of our tastes than we do, and the ability to predict the Earth's increasingly erratic weather systems.

It seems a long time since a small Massachusetts airline made the first commercial electric aeroplane orders from Eviation Aircraft at the Paris Air Show in June 2019, even since Airbus, Boeing et al. cranked up the pace of rolling out their hybrid models in the middle of the 2020s. However, as delays on the transatlantic Hyperloop tunnel continue, my eco-conscience is thankful for the increasing ubiquity of electric air travel.

I am not as enamoured with the restrictions it places on luggage, although the now-commonplace self-cleaning textiles (containing nanostructures that break down organic matter when exposed to light) make a limited wardrobe less of a concern than it would have been in the days before waste plastics had overtaken the likes of cotton and polyester as our clothing material of choice.

It's fitting that I arrive in the Big Apple on a hybrid aircraft that produces dramatically lower emissions than a similar flight would have in 2019, for it is the climate crisis that has shaped the city's most significant changes in the last 10 years. That famous skyline might be more vertigo-inducing than ever, but changes brought on by environmental concerns have reshaped New York at street level. A decade prior, trash was still a common fixture in city living, but street openings now suck your waste through an underground network of pneumatic tubes at more than 50mph to stations miles away, making that clutter a thing of the past.

Once a rare novelty, living walls envelop us in greenery and urban farms occupy many of the shops and banks left vacant by both the end of mainstream shopping and the discontinuance of cash. Meanwhile the lanes that are taken up by autonomous vehicles are shadowed by expansive cycle skyways. City life is (save for the incessant whirring of Uber's tiresome flying taxis and those damn delivery drones) a considerably more tranquil experience than it once was.

I arrive in the centre of affluent Staten Island from JFK within minutes, each of the five boroughs now linked to the airport's Hyperloop hub, from where it's a short stroll to Ace Hotel's newest opening. The impact of environmental design is as conspicuous here as at any hotel I've checked into of late. The interiors are strongly led by retro millennial pink, but it's the wealth of cleverly upcycled design pieces throughout that demand most attention. The couches are produced from spent mash collected from the hotel's own nano-brewery, decorative bowls are made from some of the 100,000 tonnes of used toilet paper flushed annually in New York City, and waste coffee aids growth at the hotel's on-site farm, which produces almost 90 per cent of the restaurant's entirely plant-based menu. While the rise of the circular economy and zero waste were buzzwords at the dawn of the 2020s, today's commonplace ingenuity in upcycling has changed the face of urban design.

With more of us concerned with the traceability of products and ingredients than ever before, Ace Staten Island's savvy use of spatial computing allows guests to understand the story behind each and every detail. On a custom-made, mixed-reality platform, the designers and makers of each piece talk me through their processes and inspirations, the Dutch creative behind those used toilet-paper objets d'art appearing through my iContacts at the wave of a hand. Kurzweil's prediction that virtual reality will feel 100 per cent real by 2029 may have missed the mark, but I can't help but marvel at the achievements made in this field in recent years alone.

At dinner I visit the restaurant's various suppliers simply by gesturing toward particular ingredients. As someone born in the 20th century, I still have that tendency to swipe my hands through their faces to check they're not actually there - you never see the youngsters doing that. The head brewer behind the hotel's craft beer then takes me on a tour of the brewery. Technology has made what was once impossible a reality, but good old-fashioned storytelling and high quality, honest ingredients still matter most.

Vehicle automation having practically ended traffic, coupled with the rise of Hyperloop and flying taxis, means that New York - like other major cities - has experienced immeasurable sprawl. You might no longer need a Manhattan postcode to be at the centre of things, but many of its disused retail outlets and traditional office buildings have led to a creative renaissance that shows that the borough will always be NYC's beating heart. I head to a gargantuan emerging art space occupying a vast former Facebook (remember them?) office, the algorithms that Siri feeds into my digital identity leading me straight to the works of most interest.

Again, the sharp use of mixed reality brings the space to life and many of the artists have cleverly hacked the system to bring lifelike interventions into the gallery. A hyperreal great white shark swims through a pool that we're encouraged to paddle in, a play on the murky waters of contemporary politics. Following a similar theme, one artist has filled a room with several notable political figures from the early 21st century talking to one another, recalling the days before the left and right split and the middle ground disintegrated. Afterwards I head to Hablar in the Lower East Side, one of the countless talking cafés that has sprung up over the last five years employing 5G-blocking technology to encourage human-to-human interaction.

With more people living in increasingly homogenised cities than ever before (we've seen a 10 per cent increase in migration toward cities since 2019) and virtual reality now capable of leading us through worlds far away, city travel in 2029 is more of a cross- cultural experience than ever before. We take city breaks to see how others are integrating new technologies and environmental design into their daily lives, to unearth emerging offline creative scenes experimenting with pre-21st-century crafts, and to physically engage in a largely virtual world. For the first time in several years, data shows that we are conversing with humans more than robots. Travel is one of the key factors in saving us from a digital dystopia.

From home to hotel, our faces are now all we need to transition through multiple transport systems, board aircraft and open our hotel door. Big data, the internet of things and billions of advanced physical and virtual sensors coalesce in assisting our AI assistants to assist. Crowd-sourced, personalised recommendations are beamed directly to our retinas and waiting is an inconvenience consigned to the history books. The blurred realities achieved through spatial computing lend art and culture an enhanced potency of which we could once only have dreamed. Most importantly, the human touch has returned - part of the ongoing backlash against the social networks that tore communities apart, meet-ups and communal neighbourhood activities have brought renewed life into our cities.

As I take a taxi over to Williamsburg, the one per cent's playground, I fly past the Chrysler Building, which was the world's tallest structure 100 years ago. As countless buildings dwarf it, the art-deco masterpiece - now a colossal co-working space - is symbolic of how far we've come. The 1920s were defined by their exuberant popular culture and, a century on, New York is still thriving. However, this progression is not based on the latest biotechnologies, robot intelligence or mixed realities: it's based on humans. Having rebuilt connections with one another, we are travelling to share experiences more than ever. Travel is within us. It is an emotion no machine will ever truly replicate.