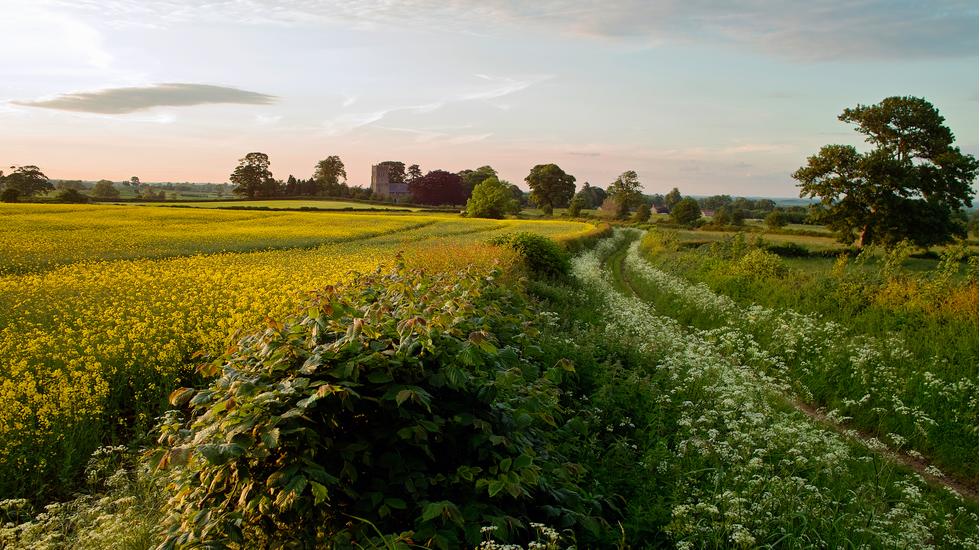 Artists Artists are a magical sort of people: they see things the rest of us cannot; they have an uncanny ability to make the ordinary arcane; and they turn what seems hieroglyphic into such beautiful simplicity. Few wield such powers, but you'll find five of the wizarding sort below who have managed to skilfully capture the British landscape's sundry personalities, immortalising them in art form.

The oldest artist in this collection has long since left us; the rest are still drawing inspiration from their surroundings today. Regardless of dates and eras, what you'll soon notice is that the locations' depictions are the very carbon copy of those sites. And walking through those places is like stepping into the frame.

En route, you'll encounter beaches that hosted medieval battles, harbours that brought the Game of Thrones to life, streams long since etched onto our artistic consciousness and towns that the Brontës called home.

One of the main drags about hallowed sites is that the surrounding area often falls prey to change, development or deprivation. But this is not the case with any of the five you'll see here. Revered for their natural beauty, these landscapes and their environs have been protected and preserved to an admirable degree, so much so that the difference between even the oldest painting and modern photograph is nearly indiscernible.

It's a testament to Ireland's olde-worlde charm and wild, cinematic landscapes that fantasy epics should choose these shores. Ballintoy Harbour sets the scene for Theon Greyjoy in Game of Thrones when he arrives at the Iron Islands, where he first meets his sister, Yara, and where he later admires his ship, the Sea Bitch.

Though you may not see Greyjoy on your visit, you probably will see many of the wildlife species that grace this stretch, including Atlantic seals, black rabbits, puffins, dolphins and one of Ireland's rarest birds, the chough.

George Callaghan, born in Country Antrim in 1941, adeptly captures the tumbling hillsides of his native Emerald Isle. He now lives in the medieval French village of Lherm with his wife, Stef.

Simon Palmer may have been torn away from the Yorkshire countryside as a child when his family decided to move south, but his northern connection had already been too firmly rooted for him to stay away. For the past 40 years, Palmer has lived and taken inspiration from his home in Wensleydale and the surrounding Yorkshire Dales.

Watlass Moor in Thornton Watlass, Ripon sits innocuously on the fringes of the Dales, a devastatingly beautiful and charismatic little part of England, instantly recognisable by its hedgerows, dry-stone walls, narrow country lanes and tumbling agricultural fields. And from this seemingly ordinary and domesticated setting, Palmer has drawn out elements of the fantastical and the arcane.

Yorkshire's longstanding capacity to captivate and beguile was certainly not lost on the Brontë sisters, who were born in Thornton, in a building now aptly named Emily's café. The sisters lived at the Thornton Parsonage until the eldest sister, Charlotte, was almost four years old when the family moved to Haworth where they crafted their most famous works.

The Mill Stream by John Constable

Suffolk is known fondly as Constable Country. One of Britain's most celebrated landscape painters, Constable was a self-taught artist, who instinctively brought the romantic pastoral scenes of his hometown to life on canvas.

Today, you can follow the Constable trail, on which you'll pass Flatford Mill on the banks of the River Stour and the site of his other famous work, The Hay Wain. And, as Constable did, you'll look out over the Stour Valley and Dedham Vale. When you reach Dedham, revive yourself at the Old Bakery Café before journeying back through tree-lined footpaths.

If your grasp of the Welsh language is shoddy, the name Pwll Deri won't mean that much to you. But what if we told you it means "pool of oaks"? Yes, now you're beginning to feel the magic and majesty commanded by these 120m cliffs gazing over the St Georges Channel.

For stalwart adventurers willing to brace the icy seas, nearby Whitesands Bay is ranked as one of the UK's best surfing spots. And for the land-lovers among you, there's the staggeringly beautiful 300km Pembrokeshire Coast Path to follow.

Helen Lush was born in County Durham and spent her childhood immersing herself in the natural world, from which she developed her interest in botany and landscape. She now lives in South Wales where her muses lay right on her doorstep.

This Dartmouth seascape is as close a facsimile as a piece of art can be to the real thing. It's the type of painting that makes you double-take to check that it isn't actually a photograph.

Though these shores may look serene and peaceful today, they were once the arena for a 15th-century invasion attempt by the French that culminated in the Battle of Blackpool Sands.

Jeanette Smith grew up in the fishing port of Brixham in Devon, where she spent her childhood looking out at the seascape, trying to capture even the movement of a ship's sails. Her life-long immersion in the Devon countryside and her meticulous attention to the landscape's every detail imbues her paintings with a remarkable realness.