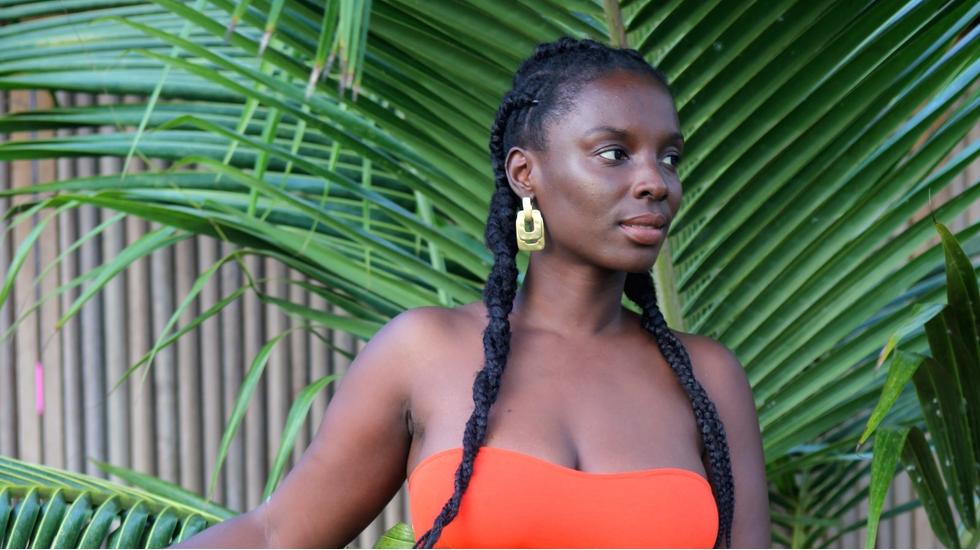 In In 2013, One Direction visited Ghana with Comic Relief. "Just arrived back from Accra, best life experience ever," tweeted Niall Horan. "I've seen the slums right in front of me! This is no joke! Poverty is real!" Photos circled the internet of the group singing with students at a school in Jamestown, one of the poorest but a culturally rich area of Accra, and a backlash ensued. Musician Wanlov fired back: "Ghana is getting worse, so heaven sent down 5 downcut Jesuses to teach us clapping."

She was pissed off too, but not in the way that you might think. "As Africans, we have this thing where an outsider or foreigner comes and travels to our country, gives us a view of it and we never like it," Maame says, drawing out the word "never" for emphasis. "But if you want to put a different image of your country out there, then go and travel and put it out there yourself."

Changing narratives is part of Maame's mission. The actress and producer is best known for playing Zeinab, the slightly jaded, forward-thinking businesswoman on the web series heralded as the Sex and the City of the African continent. Set in Accra, An African City tells the story of five independent women ("returnees" or "repats" as they call them) navigating the difficult process of moving back home to Ghana after stints living and working abroad. Reaching a million views only a few weeks after airing for the first time, the show struck a chord with women of the African diaspora.

The show, now in its second season, is produced by 34-year-old Nicole Amarteifio (also a returnee), who told Lena Dunham's Lenny Letter that her aim was to represent "women who are successful and independent and at the far extreme of the 'single story' of Africa, which tends to be about war, poverty and famine".

Inspired by real events, the series addresses everything from getting your vibrator through customs to dealing with the property market in Ghana (rental accommodation can cost up to £4,000 per month, and you have to pay one whole year in cash upfront) and avoiding turning to "uncles" in order to solve that problem. (The term "uncle" refers to an older man with a wife who buys a younger women everything from handbags to houses.) However, it also tackles harder-hitting issues including domestic violence. In season one, when the character Makena wonders if she was in fact raped if the experience was gentle, Maame's Zainab fires back with: "The point is that she said 'no'. I don't care if she screamed it, whispered it or said it in fucking sign language." In doing so, the show is opening up a safe space for dialogue surrounding significant issues, and blazing a trail for a multi-faceted portrayal of the modern African woman.

Maame's next project is Girl Going Places, a YouTube travel series produced by and starring the actress herself, which exists to "change the narrative on the dark continent". While An African City shows the cosmopolitan side of Accra, highlighting some of the city's coolest restaurants, bars and boutiques, Girl Going Places takes that a few steps further and provides a platform for some of the most interesting destinations in Ghana as a whole. It's the reason that Maame has invited me to spend two days travelling from Accra to the slave castles of Cape Coast, the surf town of Busua and eventually on to a boutique hideaway called Lou Moon.

Maame had to re-familiarise herself with Ghana when she moved back in 2013, after being educated in London and Philadelphia. The biggest shock was being treated like an "other" in her own country, and she found that travelling helped her become reacquainted with home. She says: "I think once you understand who you are and where you're from and how dynamic it is - the good and the bad - then there's a self confidence that comes from that."

It's a process that Maame believes all Ghanaians should undertake. She explains that Ghanaians rarely explore their own country, beyond travelling for funerals and weddings. "You never get up and say, 'Hey I'm going to explore', it's just not done. It's a cultural thing… our parents didn't, our grandparents didn't." Girl Going Places will focus on internal tourism, encouraging Africans to travel within their own countries and continent, so that the next time the likes of One Direction give one side of the story, they can respond with many others.

Cape Coast was once the European colonial capital and the largest slave-trading centre in West Africa. Cape Coast Castle and Elmina Castle are two of the most important historical landmarks in Ghana, both sites where slaves were kept before being shipped to the Americas. "Before I went I never thought I would be as emotionally impacted as I was - not because I didn't care, but because I am Ghanaian; I know where I'm from and I can connect my ancestors back to somewhere here. But it's an extremely sobering experience, to imagine that that kind of evil happened in your own backyard. And then to have a physical remnant of that. There's a smell in the dungeons that to me can only be that of human skin."

Cape Three Points is Ghana's southernmost peninsula, named for its three points that jut out into the Atlantic Ocean. The area is home to a small fishing village, deserted white sandy beaches and a group of small eco-lodges. "I've been there at least seven times as it's the perfect escape from Accra. I went with a friend recently and she absolutely hated it, as there is only one eco-lodge (Escape Three Points), which is very n-a-t-u-r-a-l. I love it though - the beach is stunning and totally untouched. You wake up in the morning with turtles crossing the sand. The roads are terrible so I would jump on the bus from Accra to Takoradi and then take a taxi from Takoradi."

Around two-and-a-half hours from Tamale, the capital of Ghana's Northern Region, Mole National Park is the country's largest wildlife refuge, with over 300 species including elephants, kob antelopes, baboons and buffalos. "You have to stay at the beautiful Zaina Lodge, which is West Africa's first luxury safari camp. Located inside the game reserve, here you get to see the animals up close and personal. The architecture is inspired by the famous Larabanga Mosque and the infinity pool, restaurant and bar overlook watering holes that are home to elephants, antelope, and crocodiles. It's one of the top places I have been."

This small village in the Volta Region is home to a number of caves that once served as a refuge for the Ewe people. Every cave has a different purpose, and all serve as a fascinating look into tribal life dating back hundreds of years. "Throughout my travels this group of ancestral caves has been one of the most amazing places I've visited. You have to hike a good few hours to get there (bring hiking shoes and bug spray), and there's a steep mountain with random ropes to support as you go down a six-foot ladder into the caves. The history is amazing and the views from the top of the hill out over the lush green jungle are stunning."

In 2006, two Americans set up Ghana's first surf shop on Busua beach, and this sleepy fishing town remains the go-to spot for travellers who want to catch a wave. You'll find brightly painted shacks blaring dancehall and reggae and a few eco-hotels. "Busua is the quintessential small town. What I love about it is that it just so happens to be located on one of the most beautiful stretches of beach in the country. Its size also creates a home-from-home experience. In the space of only one weekend you can get to know the fishermen and surf instructors by name. Come for the Asa Baako One Dance music festival to see the town come alive."