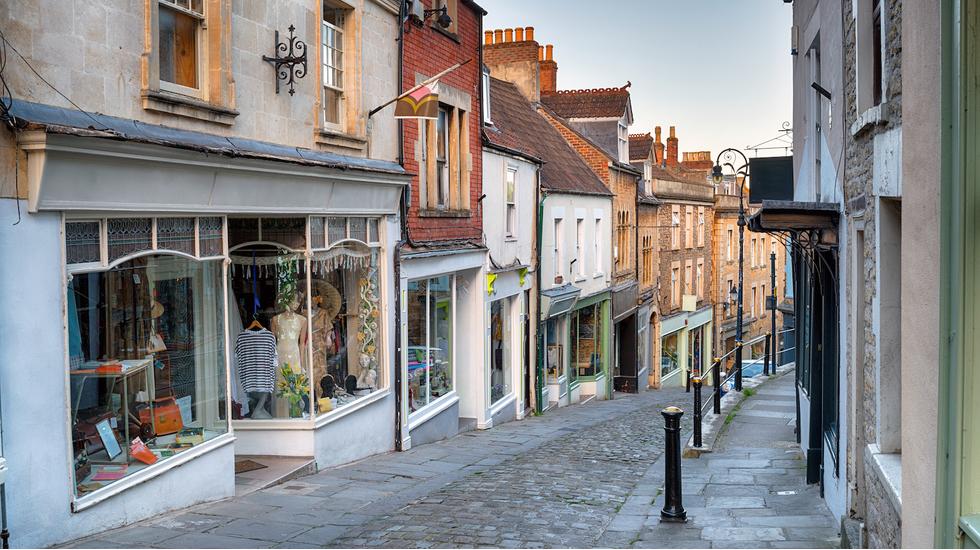 Day Day trips are the bread and butter of non-committal travellers. We've set our radar to within two hours' journey from London to hone in on the seaside escapes, city breaks and countryside idylls perfect for Londoners who are short on time or reticent about straying far from home.

Earmark this lot for when it's safe to get out exploring again.

Bray is a go-to for Londoners who like to travel through their stomachs - quite literally; a meal at the headline-grabbing The Fat Duck unfolds as a journey, not a menu. Not snagged a reservation at Heston's three-Michelin starred restaurant? No worries. This chocolate-box hamlet is also home to Blumenthal's more affordable The Hind's Head gastropub and the three-starred Roux brothers' Waterside Inn. Dining aside, there's not a fantastic amount to do apart from strolling between the timbered cottages, perfect for working up an appetite.

Get there: It's a 50-minute drive from London to Bray. If you're travelling by train, catch a 35-minute service from Paddington to Maidenhead - from here it's a half-hour walk or five-minute taxi ride to Bray.

In Jane Austen's Emma, everybody has a "burst of admiration" on arriving at Box Hill - and we can't think of a better antidote to the last few months than pitching up with some sandwiches at Surrey's much-loved picnic spot. This wildlife-rich National Trust estate is prime territory for languorous walks across chalk downland and endorphin-pumping bike rides (Box Hill gained a reputation and the toughest section of the 2012 Olympic road-cycling race). Take stock of vistas over the Weald towards the South Downs or stretch out those lockdown legs on an hour's ramble to Denbies Hillside.

Get there: Trains from Clapham Junction to Box Hill & Westhumble clock in around 50 minutes; driving takes an hour. A two-hour cycle route stretches from Central London through Richmond Park to Box Hill.

This seaside playground has been the UK's home of hedonism since the 18th century. Beyond the onion-domed Royal Pavilion, Pride and the vinegar-soaked chips that scent Brighton's pebbled beach, the city's indie spirit can be felt at its most intense in North Laine, between design-forward boutiques, vintage stores and sustainable restaurants. From here, there are plenty of opportunities to extend your trip. Pick up the 100-mile South Downs Way that stretches from Winchester to Eastbourne - Seven Sisters to Beachy Head is our favourite stretch - or take the 15-minute train (20 minutes by car) to neighbouring Lewes.

Get there: Trains run regularly from London Victoria and London Bridge and take around an hour. Driving usually takes between 90 minutes and two hours, traffic depending.

A land of leather-bound books, manicured lawns and ochre spires, Oxford is a byword for intellectual excellence, a city as famed for its bright minds as it is for grand buildings. Nevertheless, between all the history and prestige, Oxford's large student population keeps the vibe young and fresh. Between cream teas, British boozers and punting on the Cherwell (harder than it looks), you'll find a set of creative cocktail bars and vegan restaurants (Happy Friday Kitchen is a local favourite). Of course, you'll be on the cusp of the Cotswolds here, too - best to pack your wellies in case you feel like extending your trip across undulating hills, passing through twee villages as you alternate between country walks, pubs and great restaurants such as The Wild Rabbit and The Kingham Plough.

Get there: Trains from Paddington and Marylebone stations take around an hour. Drive from Central London in just under an hour and a half.

A go-to weekend getaway for Londoners, this trips clocks in at about a 90-minute train ride from Waterloo Station. A designated national park, days in The New Forest are best spent ambling through woodland lanes, gawking at thatch-roofed pubs and sampling pints of bitter as you go. Wild horses and donkeys are known to stop traffic as they cross between patches of pastureland, so patience is vital. Made for walking and biking, with furrowed paths cleared for each, best to go at a leisurely countryside pace. Stop off at charming market towns for homemade jam or venture to the coastal cobbled Georgian seaside villages. Brockenhurst and Lyndhurst, are both end destinations commonly punched into SatNav thanks to their city-worthy farm-to-table restaurants and hip boutique hotels - The Limewood and the original The Pig are two of the best.

Get there: Direct trains run regularly from Waterloo to New Forest in around 90 minutes. Travelling by car takes a similar time.

Since Turner Contemporary opened here in 2011, Margate has undergone a renaissance fuelled by cold-brew coffee, craft beer and natural wine. Nevertheless, between its vintage stores, galleries and seaweed-based skincare, there's a rough-edged salty charm that makes this seaside town especially loveable. Spend an hour pondering the Shell Grotto before heading to Dreamland for a spin at the roller disco - whether you follow that with a 99 on the beach or fresh seafood in Hantverk & Found is up to you. For something quieter, nip along the Kent coast to Whitstable, where seafront bicycle rides are best followed by plates of oysters from Wheelers and pints of Kentish ale in one of several micropubs.

Get there: The train journey from St Pancras to Margate takes around an hour and 30 minutes, as does driving.

For many, Somerset is synonymous with Glastonbury. Yet what we love about the county is its villages. A two-hour drive from the capital, Frome feels worlds away from lockdown London. This delightful, community-first enclave is best experienced at one of its markets or on hip Catherine Hill, where winding streets lined with artisan shops lead to Valentine's Lamp - bring stamps; this is the place to send letters to loved ones. Exploring done, drive 20 minutes (10 by train) to nearby Bruton where you can peruse Hauser & Wirth Somerset gallery before worshipping the holy trinity of design, food and drink in At The Chapel.

Get there: There are no direct train services to Frome, though it's possible to get there in about 2 hours and 15 minutes from Paddington. Driving takes around the same time and makes village-hopping around Somerset much easier.

Ever since Prince Bladud cured his leprosy in Bath's healing springs in 863 BCE, wellness seekers have flocked to the city to take its waters - by the 18th century, it was the place for the beau monde to see and be seen. Today, the past mingles with a pleasure-seeking attitude along the city's honey-hued streets. The Roman Baths, Bath Abbey and the Georgian masterpieces of Pulteney Bridge and the Royal Crescent rank highly among must-see attractions here, though you could as easily while away the day between artisan shops, cosy cafés and modern spas - Thermae Bath Spa is our go-to.

Get there: Direct trains run from Paddington twice an hour; journey time around 90 minutes - driving will take an extra hour on top of that.

Margate's little sister, Deal is a rugged, seaside town with a growing reputation for creativity. Compact enough to conquer in an afternoon,set the high street, brimming with independent shops and cafés, as your end goal. After lunch, mosey down to the Kent Museum of the Moving Image, packed with original poster art from Ealing Studios. At golden hour, walk the long pebbly beach until the pier comes to an end and then retreat towards town in search of battered cod and chips. Join a snaking queue for the chipper, add lashings of salt and vinegar to your order and enjoy your newspaper wrapped fare shoreside. Later, stop for a pint at The Just Reproach, a one-room micropub. Those who don't think a day trip is quite enough time in Deal should book a room at The Rose.

Get there: Deal is a two-hour drive from Central London. High-speed train services from Paddington take about an hour and 20.

Take brief refuge in the UK's happiest place to live. Bristol is a city that thrives on a cocktail of liberalism, drum 'n' bass and often a little weed - small wonder that locals are so chipper. Spot Banksy murals between ice-cream-hued terraced houses before brunching under the star-spangled ceiling of Primrose Café and pootling about the harbour. Should you be coaxed into staying the night, make a beeline for Stokes Croft or Whiteladies Road, where good restaurants and bars are plentiful. Europe's biggest hot-air balloon fiesta is held at nearby Ashton Court Estate in early August - plan accordingly.

Get there: Driving from London can take roughly two and a half hours. The fastest direct train services between Paddington and Temple Meads clock in around an hour and 40.

Lying on the cusp of London, Richmond is a Surrey town in spirit. After a lip-smacking lunch at Petersham Nurseries café - which plates up simple and modern British food with an Italian slant - make tracks for Richmond Park, the largest royal park in the city. The park, which is most famous for its fallow-coloured free-roaming deer, has many gardens, ponds and grasslands to explore. From meadowy patches to canalised walks, respite from the city never felt so right. When the inevitable happens and the urbanite within you starts searching for the nearest power socket to recharge a fading iPhone, head to The Bingham - a riverside Georgian townhouse - and order as many rounds as required to bring your battery life over the 50% threshold.

Get there: Richmond sits at the eastern end of the District line and is serviced by the London Overground too. Journey time from London Bridge, about 30 minutes.

Two miles from the sea, this East Sussex town is attracting a new crop of creatives. City dwellers gone rogue are responsible for the town's umpteen high-end interior shops and outlets. Considering the area is a little over a square mile - and pre-200s Rye's interior scene was heralded by Antiques Roadshow expert Andy McConnell - this swing to cool is an unexpected, but welcome shift. Wander through the jumble of Georgian and medieval houses that lace the labyrinthine streets in the historic town. Wind your way around enough cobbled corners and you'll stumble across coffee shops, miniscule book shops and some great eateries. The Ship Inn, owned by the ex-proprietors of Primrose Hill gastro-pub The Engineer, is a great spot for lunch (if you like laid-back, vintage interiors). Head down Mermaid Street, taking in half-timbered houses on your route with no particular endpoint in mind.

Get there: Driving to Rye takes a little less than two hours from Central London. To get there by train, catch a service to Ashford International where you'll change for a train to Rye. Journey time around an hour.

Discover More
Tired of London? Move to One of These UK Cities
Read now