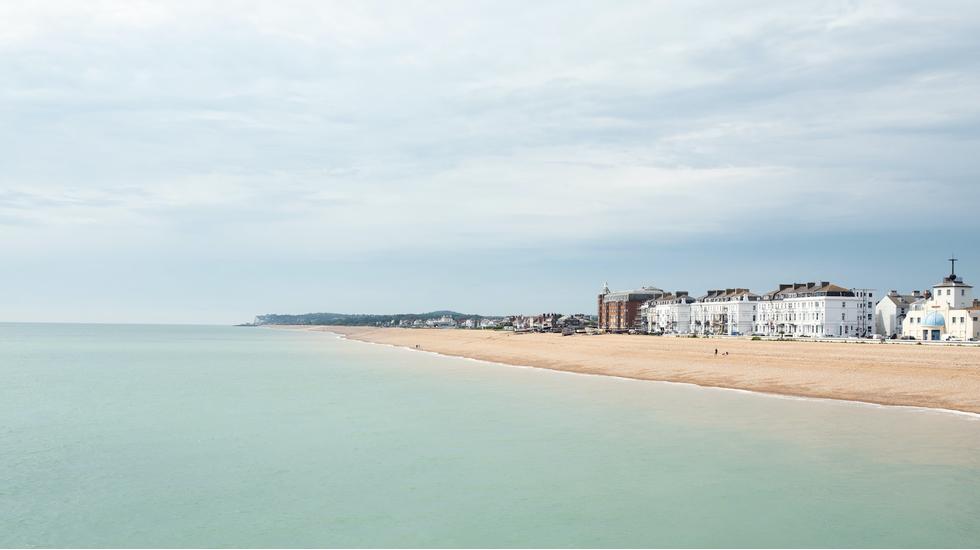 While While many "down from Londoners" flock to the shores of Margate, more laid-back and under-radar Deal punches above its weight in both history and independent spirit. Closer to Calais than London (you'll spot France on a clear day) this seaside town enjoys many creative and culinary flavours that have rippled across the Channel. It's a place where arty types thrive - both in terms of visitors and the many who choose to stay for good; Deal has been ranked among the UK's best places to live.

Things weren't always so twee; Deal has seen its fair share of drama since Julius Caesar landed here in 55 BCE. Henry VIII built not one but three castles in the area and Lord Nelson enjoyed a dalliance with a mistress in Deal. One of the Cinque Ports, the town has also played a key role in the south coast's military and trading history, meaning that Deal's drinking dens have nearly always been awash with rowdy sailors and the odd smuggler.

Today, Deal remains true to its roots while appealing to trend-conscious travellers looking for the next hotspot. Its bohemian history manifests in its mish-mash of Georgian houses and pastel-hued cottages speckled with blue plaques. You'll also see it in the small galleries, in the calendar of artist open houses, music performances and festivals, and in the old-meets-new aesthetic that seeps from the concrete-clad pier, through its homewares boutiques and vintage stores, to the idiosyncratic cottages that have opened their doors as B&Bs or self-catered apartments.

High-speed train services from Paddington will have you chugging lungfuls of sea air in about an hour and 20, though Deal is just a two-hour drive from central London, too, making a great pit-stop on a coastal road trip.

The town's motto? "Adjuvate advenas", which translates from Latin to "befriend a stranger". A warm welcome is a given here. Get planning.

Once a rowdy boozer, this Victorian townhouse has been Deal’s crown jewel since it blossomed into The Rose in 2018. “Jewel” is apt, for this boutique hotel sings with colour. The eight, individually designed rooms have shunned the millennial penchant for muted minimalism. Instead, covetable, thrifted finds share the space with rhubarb-pink velvets, mid-century furnishings clad with Liberty prints, record players, stacks of coffee-table books and Austin Austin toiletries. Downstairs, the buzzy, art-studded lounge bar and restaurant are helmed by ex-Polpo chef Rachel O’Sullivan, meaning that modern-British menus are updated with international flavours (think: smoked haddock with samphire, soft-boiled egg and pangrattato). Best accompanied by a cocktail spiked with foraged ingredients.

Make like a local and stay in this Grade II-listed, self-catered cottage in Deal’s Conservation Area. Georgian sash windows, open fireplaces and exposed, knotted-wood floorboards are spirited into the 21st century by an oh-so Farrow & Ball palette, Graham & Green’s gloriously enveloping beds, strung-up Edison bulbs and Aesop products. With five bedrooms, three bathrooms, a nostalgic dining room and courtyard garden, this characterful spot is the ideal base for a friends-and-family trip. For a more traditional crash pad away from the fray, try Manor Farmhouse.

A pebble’s toss from the beach, Birdcage Cottage is the kind of idiosyncratic, self-catered den where you could easily imagine a modern-day Bloomsbury Group shacked up. You’d think that arsenic-green walls, bird-themed artwork and exotic ephemera would make for unusual bedfellows with period features, exposed brickwork and winding staircases, but together they actually work very well. The glass-roofed dining room is perfect for a lingering supper – we suggest pairing fresh catch from nearby fishmongers Jenkins & Son with a few bottles from Le Pinardier. Sleeps five.

It’d be jarring to find a slew of hotels in pocket-sized enclaves such as Deal – in fact, one of the things we love most about staying here is discovering the B&Bs decked out by design-forward locals. Try the offbeat Fisherman’s Cottage or this modern seafront apartment – on a clear day, you’ll spot France from here. A twee coastal vibe has been whitewashed and sprinkled with vintage oddments at this modern-rustic cottage – we’ve already tacked its old-school Aga onto our Pinterest board.

The Pig at Bridge Place

Striking the balance between bucolic and bon vivant, The Pig was Kent’s foremost rock ‘n’ roll venue in the 60s and 70s – Pink Floyd and Led Zeppelin played here – and today this vibe manifests in a mismatched aesthetic that extends into covert corners. To reach this Grade II-listed manor, you’ll have to drive about half an hour inland from Deal. We particularly love snaffling away in the garden-to-plate restaurant and bedding down in a Comfy Luxe room between days dipping in and out of the south coast’s most delightful enclaves. From the hotel, Whitstable and Margate are within a 30-minute drive; you’ll reach Rye and Dungeness in less than an hour.