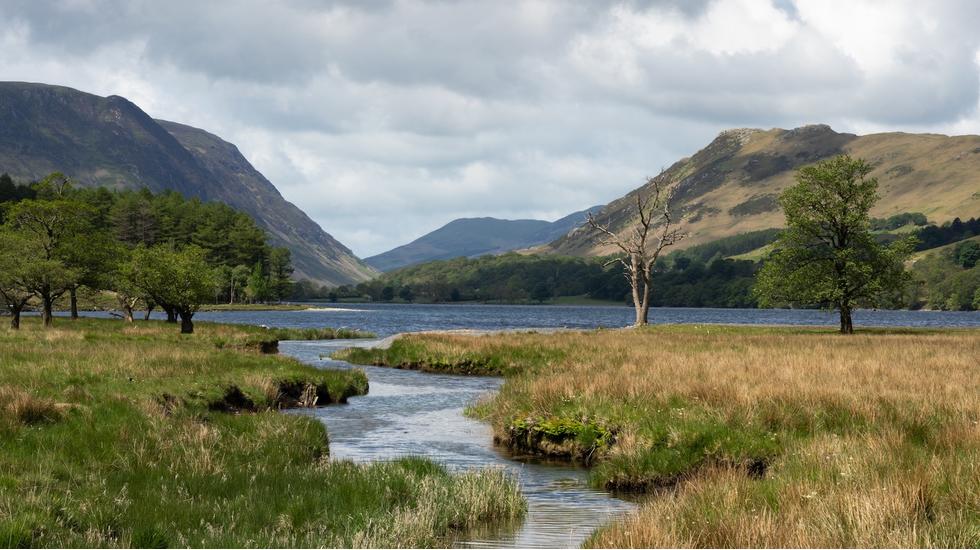 Few Few places in England are as green or as pleasant as the Lake District. "The fleeting hour of life of those who love the hills is quickly spent, but the hills are eternal," wrote fellwalker Alfred Wainwright. "Always there will be the lonely ridge, the dancing beck, the silent forest; always there will be the exhilaration of the summits. These are for the seeking, and those who seek and find… will be blessed both in mind and body."

Indeed, this northwestern realm has inspired centuries of painters, poets, wayfarers and thinkers. Beatrix Potter dreamed up Peter Rabbit from Hill Top farmhouse; Wordsworth swooned over dancing daffodils in Grasmere; John Ruskin developed the ideals of environmentalism and equality between the tarns.

Designated as a Unesco World Heritage Site in 2017, today the Lake District National Park remains one of the country's favourite places for natural immersion. Soaring mountains such as Scafell Pike - England's highest - are mirrored in glassy lakes. Fells are scored by valleys decorated with dense woodland. Stone-clad market towns and chocolate-box villages have become hubs for ramblers, watersport enthusiasts and independent creatives.

It's estimated that almost 16 million people succumb to the lure of the Lakes each year - most of them in summer. But in truth, it's a place that sings throughout the seasons, whether you're admiring wildflowers in spring, village-hopping in autumn or defrosting by a pub fire after a winter's walk. Accommodation choices are plentiful, whether you're seeking an off-grid log cabin, five-star spa or simply want to pitch a tent. Meanwhile, Cumbria's culinary scene runs the gamut from 19th-century gingerbread to Michelin-starred field-to-fork fare.

A comprehensive guide to the Lakes would be as sprawling as its wild landscape. Instead, we've consulted locals, hiked high passes fuelled by Kendal mint cake and rewarded ourselves with pints at cosy inns to cherry-pick the best - and often under-the-radar - places to stay and play.

Georgian majesty gets a 21st-century upgrade at this colour-pop 40-room hotel (sister to Cornwall’s Watergate Bay) on the banks of sail-flecked Ullswater. Its name “Another Place” is apt, for staying here is a transportive experience for those in need of a nature-fix but not wanting to forego home comforts. Fells cascade to the private shoreline – a launchpad for hiking, cycling and watersports – while, inside, hotel guests avail of the Swim Club spa and infinity pool before tucking into local produce at Rampsbeck restaurant. Days are best finished gazing at stars from the outdoor hot tub.

Set in an Edwardian building, the Gilpin Hotel & Lake House is renowned for its great service, country-house-style bedrooms, Michelin-starred food and alpacas, who graze in the acres of private ground that wrap around its properties. Yet it’s the five detached Spa Lodges that are a real stand-out for us. Check in to one of these and you’ll enjoy a personal en-suite spa complete with a rain shower, steam room, hydrotherapy hot tub and outdoor sauna. Your trail legs deserve a little pampering, after all.

The Boathouse, The Lingholm Estate

Of the 12 bookable properties that pepper The Lingholm Estate (where Beatrix Potter once summered), The Boathouse is the one we can’t help but return to. The lake-facing end of this wood-clad, Scandi-style apartment is fully glazed meaning that vistas over Derwentwater are uninterrupted, even from the free-standing bath. Like this? You’ll love the eco-friendly, RIBA-award-winning Lake District Love Shack which brings together Japanese architectural style, pared-back luxury and views over Lake Windermere.

Off-grid luxury in jaw-dropping locations. Experience over consumerism. Such premises behind Hinterlandes are simple and yet oh-so effective. Its converted American bus has been fitted with a VW camper as a bedroom on the roof as well as an Aga, hot shower (with Aesop products), compost loo and wood-fired hot tub. The location shifts between remote fields while never leaving a trace on the environment. Hinterlandes also has a revamped Airstream, cabin and yacht in the works too. For a more traditional nomadic experience, book a slow-living retreat on one of these horse-drawn gypsy caravans.

The Lakes is an area where prices can ramp up quickly as soon as the food is labelled “fine-dining” or an overnight stay doesn’t involve tent poles. Thankfully, The Yan, set in a converted outbuilding at Broadrayne Farm, presents a more affordable option. Head to its bistro for rustic fare served with just the right amount of finesse before decamping to a wood-raftered room kitted out with upcycled furnishings and a restrained palette that lets vistas of the fells beyond take centre stage. Grasmere village is a pleasant amble away.

Hugged by the Lake District and the Pennine Fells, the Edenhall Estate is a place where tranquillity and adventure meet. Featured on George Clarke’s Amazing Spaces, its lakeside lodge was built from locally grown larch and sleeps up to six guests – perfect if you’re travelling with friends or family. Just make sure you get dibs on the upstairs bedroom. By day, spot kingfishers, red squirrels, salmon and deer from the deck; come evening, sink into a Chesterfield by the log-burner. Smaller party? Opt for Edenhall’s renovated Bothy instead.